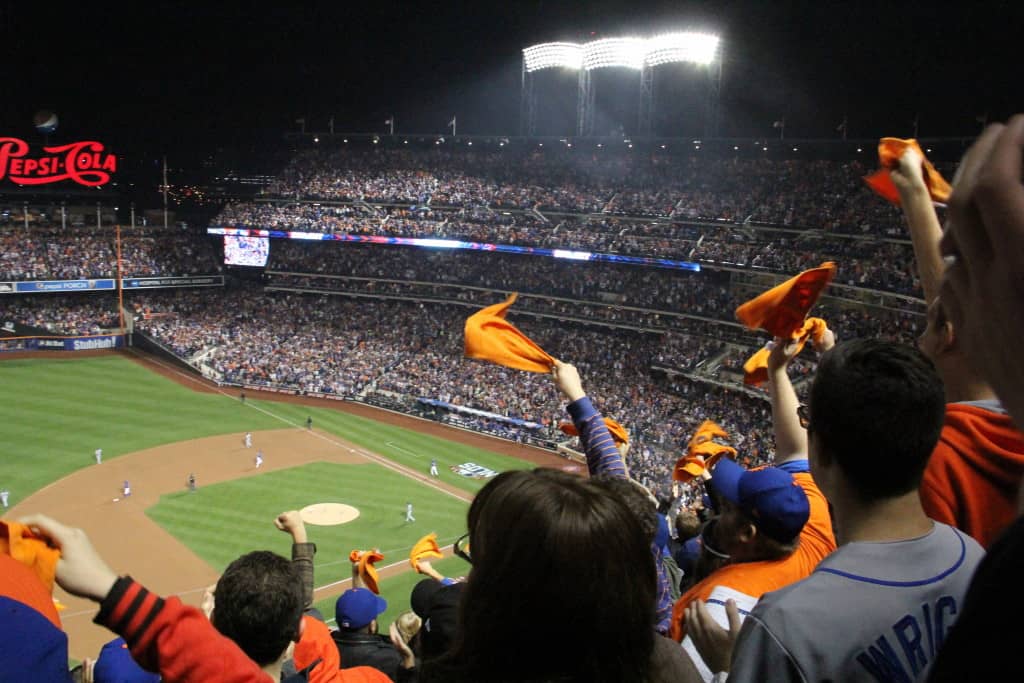 The LIRR train from Penn Station was standing-room only, though Mom and I shared a three-seater with a commuter. The walk from the station to the Jackie Robinson Rotunda was crowded, and the plaza was packed. We got inside and made our way along the jammed concourse to get some sandwiches for dinner and then parked ourselves near a column to eat before heading up to our seats, a constant stream of fans passing by.

And it was still 80 minutes until first pitch.

We got to our seats early to make sure we were in place for the player introductions. I didn’t want to miss the reaction when Chase Utley‘s name was called — and it didn’t disappoint. Moving in numberical uniform order, the announcer went quickly from No. 21 Zack Greinke to No. 22 Clayton Kershaw to No. 26 Utley, then like a comedian on stage leaving room for the laughter, paused as the boos and jeers rained down. Utley stood there, stoic and stone-faced, which was probably the best reaction he could offer. Any kind of smile or smirk might come across as not caring that his late slide (or tackle, as some have taken to calling it) in Game 2 broke Ruben Tejada‘s leg. Even when the announcer moved on, the next few players’ names were drowned out by the boos and chants of “Utley sucks!” When it came time for the Mets’ introductions, there was a gap between No. 9 and 22, where Tejada — No. 11 — should have been. But after they finished with the Mets reserves, out came Tejada, his right foot and lower leg in a walking boot, a cane in his hand. The cheers for him were as loud — probably louder — as the boos for Utley.

Mom and I attended the first regular-season game at Citi Field, which was filled with new-ness and anticipation, much like you find on any Opening Day. We were also there for R.A. Dickey‘s 20th win in 2012, when the ballpark was loud and rocked like I’d never heard it before, thanks in no small part to The 7 Line Army, which organized its first group outing that day and took over the center-field section next to the Home Run Apple. A year later, we were part of that 7 Line Army for Mike Piazza‘s induction into the Mets Hall of Fame, which elicited hearty cheers and drew manager Terry Collins out to center field to wave in a show of appreciation after the final out.

But none of that compares to the first playoff game in the new ballpark. The 7 Line donned orange shirts and filled its usual section in center field, but from our spot in the upper deck along the third-base line, I’m not sure I heard them once because the rest of the fans did their part. The place was loud, the fans standing on every two-strike pitch, waving their orange rally towels. The Dodgers’ three-run rally — really four singles (at least one of which looked like a soft bloop), the last of which included an error, allowing all three runs to score on the play — in the top of the second quieted the place down, but that didn’t last long. 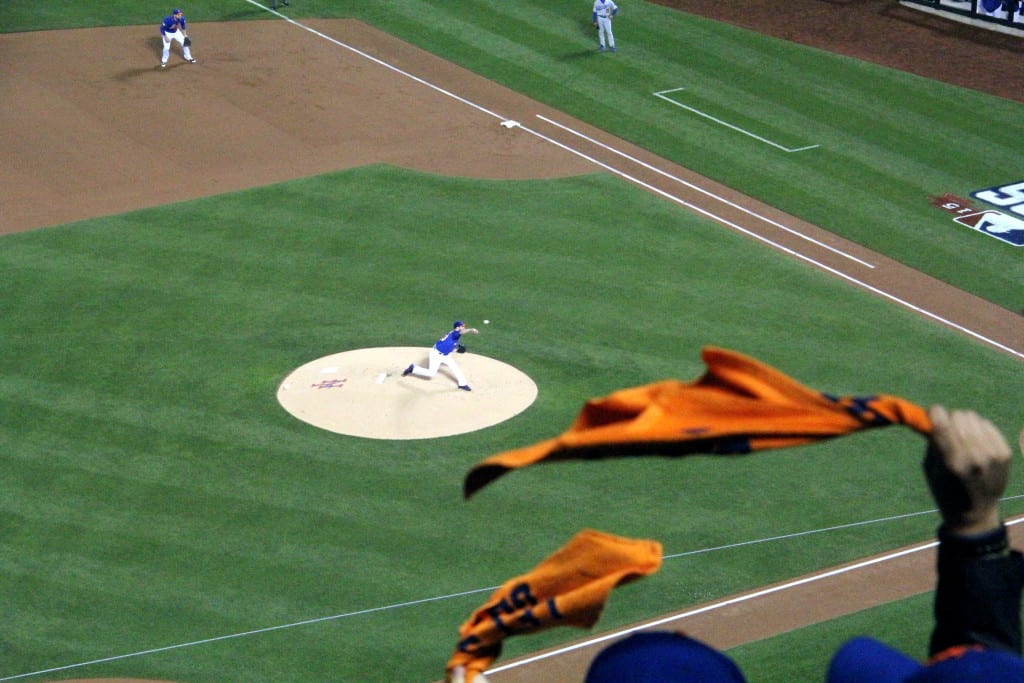 Cheering for the strikeout

Yoenis Cespedes opened the bottom of the second with a ground ball to the right of shortstop Jimmy Rollins, who backhanded it on the outfield grass and threw to first — but it was too weak, too late. Cespedes beat it out. Lucas Duda and Travis d’Arnaud followed with singles, d’Arnaud’s scoring Cespedes, and Wilmer Flores reloaded the bases with an infield single that second baseman Howie Kendrick couldn’t handle. Bases loaded, nobody out.

But then Juan Lagares grounded to first for a force out at home, and Matt Harvey struck out. What looked a potential big inning was now in jeopardy of featuring just one run and three Mets left on base. But Curtis Granderson hit the first pitch off the wall in right-center on the fly, scoring all three for a 4-3 Mets lead they would never relinquish. Citi Field rocked.

It only got louder as the Mets added on. An inning later, it was d’Arnaud with a line-drive two-run homer to the party deck in left field. In the fourth, it was a Daniel Murphy RBI single following a two-out intentional walk to David Wright — not a smart move by the Dodgers. After Murphy’s hit, as Cespedes walked to the plate, I said to my mom, “I want him to put this one next to the Acela Club,” in the second deck in left field. Five pitches later …

Carl Crawford, the Dodgers’ left fielder, barely moved. He didn’t even turn around. For a split second, I thought maybe it was going foul, but I knew. The only home run I’ve witnessed in person that could match it was one Piazza hit into the mezzanine at Shea Stadium off Randy Johnson. But it didn’t have these stakes, this atmosphere.

The score was 10-3, Mets, and Cespedes provided the dagger. The Dodgers were done. Adrian Gonzalez would get them to 10-4 with a home run in the seventh, a shot I didn’t see because it was the only time I left my seat. The Mets then added three in the bottom of the seventh, two more courtesy of a Granderson double. It was 13-4 and time to start thinking about beating Clayton Kershaw in Game 4.

Mom and I left after that inning. It was already 11:45 and we wanted to catch the 12:06 train back to Penn Station to ensure we got back to New Jersey before the last train of the night. The score made it easier to leave, though there were a couple of trains added that would’ve allowed us to stay, but perhaps not until the final out, which we watched on my phone back at Penn Station. Not even the Dodgers’ three-run homer in the top of the ninth — off a young pitcher who was only being used because of the big lead and is unlikely to see action in any meaningful situation, if Collins can help it — could deflate the feelings of excitement and satisfaction the Mets had given us.

One more win and it’s on to the NLCS. I almost wish they could’ve played Game 4 right away, considering the wave the Mets are riding.

« For once, not the last game
At the World Series »