After 22 seasons, Randy Johnson has announced his retirement. After originally planning a conference call for tomorrow, the Big Unit moved it up to tonight so as not to step on tomorrow’s announcement of the new Hall of Fame class.

My lasting memory of seeing the Big Unit in person was on May 21, 2000, at Shea Stadium, when two of the most impressive home runs I’ve seen in person were hit. One was by Mike Piazza, who obliterated one of Johnson’s pitches and launched it 492 feet into the mezzanine in left field. The other was hit by 5’11”, 170-pound Joe McEwing.

And then, of course, there was this:

Johnson leaves the game ranked impressively among baseball’s greatest pitchers. His 10.6098 strikeouts per nine innings are the best among pitchers with 1,000 innings and, of course, he’s second only to Nolan Ryan in strikeouts. His 303 wins rank 22nd, and many have speculated that he may be the last hurler to reach 300 victories. He’s 30th in winning percentage at .646 and nine of those in front of him are Hall of Famers, with another two (Pedro Martinez and Roger Clemens) Hall-worthy and two more (Johan Santana and Roy Halladay) seemingly on that track. He’s also 22nd in allowing 7.2821 hits per nine innings. 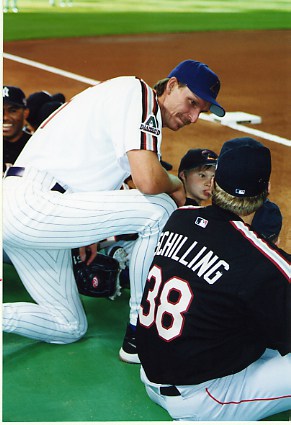 That he rates pretty low in a few other categories shouldn’t prevent him from being a first-ballot Hall of Famer. For one thing, voters will see the 4,875 strikeouts and 303 victories. Known for stretches of wildness, Johnson did walk 3.2580 batters per nine innings, ranking 716th all-time, three slots behind Babe Ruth (who had other things going for him), and ahead of just three Hall of Famers: Early Wynn, Goose Gossage and Hal Newhauser (at least among the top 1,000 ranked by Baseball-Reference). His 190 hit batters is third all-time, but Nos 1 (Walter Johnson), 2 (Eddie Plank) and 4 (Joe McGinnity) are all Hall of Famers. But despite his wildness with bases on balls and hit batters, the Big Unit only ranks 62nd in wild pitches, with 109. So either he was wild around the plate, or had a run of excellent catchers. The top six on the list are all in Cooperstown, led by Nolan Ryan’s 277.

Following Randy Johnson’s announcement, writers chipped in with their appreciations. In the style of Buster Olney …

The Big Unit defined dominance, according to Ed Price.

And, finally, Tyler Kepner offers an appreciation and a quartet of MLB.com reporters have the story, plus a look at his stops in Arizona and Seattle, as well as a tribute by Mike Bauman.