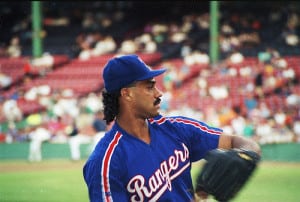 Tonight I’m posting what I hope will be the first in a weekly — or at least bi-weekly — feature wherein I go back to my film negatives and scan in photos I’ve taken since I got my first SLR camera in high school. This is the first batch of those images.

I got the camera as an early birthday present in August 1993 because my friend Matt and I were about to go up to Boston for a couple of nights to see a game at Fenway Park and take a visit to Boston College as we prepared to enter our senior year in high school. I was much more stoked about the ballgame.

Nolan Ryan was one of my favorite players, so he was my focus during batting practice, but unfortunately, he kept to the outfield and didn’t venture near us along the left-field line. So then I kept my eye on the young stars at the time — Rafael Palmeiro, Juan Gonzalez and Ivan Rodriguez. Ah, so innocent then …

I don’t remember where we stayed, but I think we drove up on Monday, the day of the game, and went home the next day, after touring campus in the morning. We paid to park in a gas station close to Fenway Park. I don’t know what it cost, but I’m sure it’s double that now. I hear the gas stations and other lots near the park get $50 or more. When we went back in May, we walked from my college roommate’s place about a mile away.

In my mind, I can think of several games I’ve shot as a fan — a Padres-Phillies game at the Vet that included a brawl started by a hard slide to the plate, the first Devil Rays-Mets game that doubled as Hideo Nomo’s Mets debut during interleague play in 1998, and my one and only visit to Tiger Stadium for a three-game series vs. the Red Sox in 1999. And even though the prints are scattered about the house in albums and frames, I can’t wait to go through the negatives and see the pictures again for the first time in a long time.

I even went an extra step and put together a video slideshow. Not sure I’ll take the time to do this every week, but I was inspired with the first try.

« The Rules, according to ESPN
Minaya brings up Bay in front of Sox fans »