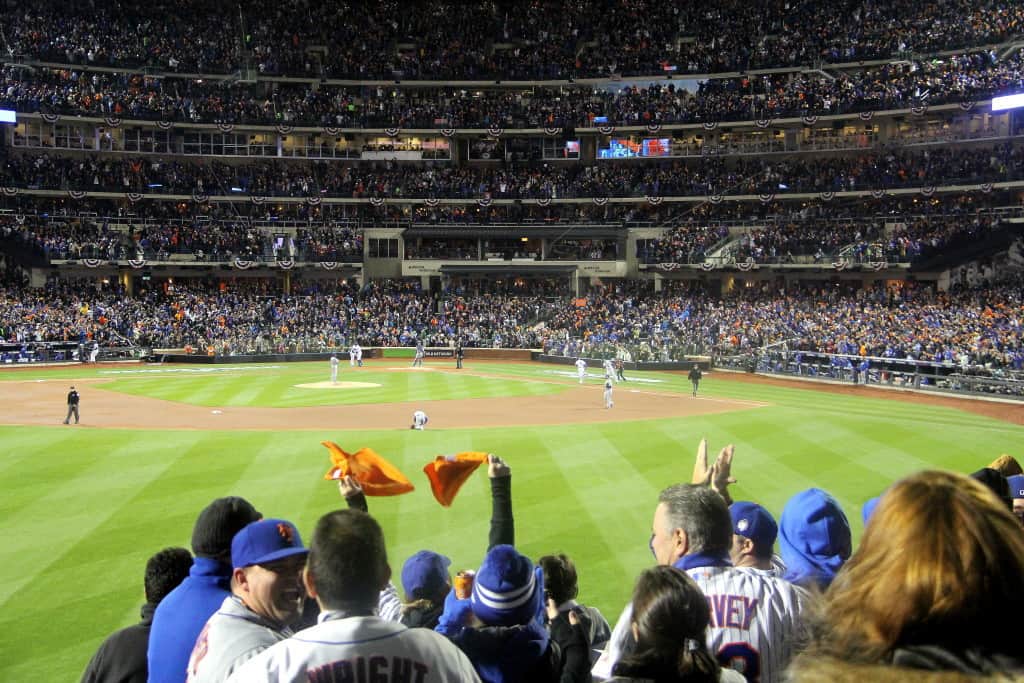 David Wright swung and the ball shot into the air. I spotted it immediately against the ink-black sky, the white orb growing bigger as it flew closer. When you’ve been to enough ballgames, you know how to read fly balls, but a lot depends on your vantage point. When you’re in the stands along the baselines, sometimes the only way to judge distance is by watching the fielders. But out beyond the outfield walls, you have the vantage point of an outfielder, and when you judge a fly ball based on whether you’d have to run in to play it or stand your ground, you have an idea of where it’s going.

It didn’t take long — a second, maybe — before I realized Wright’s fly ball was a home run. It landed maybe two sections away, a couple of rows in front of us (Row 8), but still over the party deck into the original seats. And the fans exulted.

The World Series was everything I’d expected it to be. A charged atmosphere, a packed house, barely a seat empty, it looked like. (But I know there were some, because of the frequency of people in our row coming and going. And then, later, the bathroom lines.) Wright’s homer was an omen, a sign that this game wouldn’t be like the previous ones in Kansas City. Yes, there was doubt after the Royals retook the lead in the second inning, but by the time the Mets got it back on Curtis Granderson‘s home run in the third, Noah Syndergaard had settled in to a groove (he was in the middle of retiring 12 in a row), and it was pretty much over. My confidence grew as the Mets’ win probability did, thanks to some things we hadn’t seen before from the Royals: their starter out before five innings, the bullpen touched for some runs, the defense making mistakes.

The fans did their part, too. Citi Field got loud, and then stayed loud after the third. There was an energy there, and during slower moments, when we sat, I got a little cold. But from the sixth inning on, I was standing most of the time, and the cold melted away. The standing, the swaying, the jumping, the cheering — it all warmed me up. Heck, I even sang along to the forced “Piano Man” singalong — even before they showed Billy Joel singing along to his own song (but then he stopped with the camera on him).

After the final out, after Jeurys Familia got Kendrys Morales to ground to Wright, we boogied to “Back in the New York Groove” — a song that came out the year I was born — and then many of us stayed in our seats as the high-five line ran its course and “Meet the Mets” came on, with lyrics on the video boards. It prompted a bigger singalong than “Piano Man” (which might make it a better option for the eighth inning; it is a peppier song, after all).

The concourses got more congested after that as more people headed for the exits. But it didn’t stop the singing and dancing when “Uptown Funk” was played, and those in the seats continued with the enthusiasm of a well-lubricated wedding crowd. Outside the ballpark, with SNY’s pregame show live from a stage next to the original Home Run Apple, a Mardi Gras atmosphere carried us to the cars and trains (except for those watching the broadcast).

On the local 7 train — a lot less crowded than I expected, with more people choosing the LIRR or express train, I guess — our first car wasn’t crowded at all, and was actually quite quiet and subdued. I don’t know if it was exhaustion from a long and thrilling night of rootin’ in the stands or satisfaction and confidence that what we’d expected — a different team, a different outcome back at home — had come to pass, but it seemed that everyone was just plain happy at what we had all experienced.

« October at Citi Field
When you need it most, it stops »