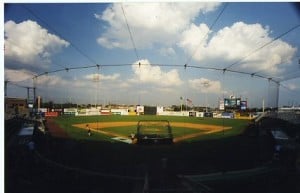 The Bears’ den in Newark.

New Jersey’s baseball history is rooted in Newark. Sure, one of the first organized professional games was played in Hoboken, but Newark’s involvement with the national pastime lasted much longer.

However, in 1949, it all disappeared. The old Newark Bears, at times a Class AAA affiliate of the Brooklyn Dodgers and then the New York Yankees, were sold to the Chicago Cubs and moved to Springfield, Mass. In 1937, the Bears won the pennant by 251/2 games, went on to win the “Little World Series” and are considered one of the best minor league teams of all time.

The Eagles, Newark’s franchise in the Negro Leagues back when too many people felt separation was necessary, also left town, and it took 50 years to bring baseball back.

Baseball’s back in Newark with the new Bears playing in the independent Atlantic League at their unfinished park along McCarter Highway and the Passaic River. Officially, it’s called Riverfront Stadium, but everyone considers it “The Den.” They are the Bears, after all.

Attending a Newark Bears game does have a feeling of history to it, knowing that these players are, in a way, descendants of baseball back in the day when the uniforms were flannel and never included the color teal. My mother came with me on this trip because her family history dates back to Newark’s Italian north side, where her grandmother’s house was torn down to make way for Interstate 280.

Riverfront Stadium actually borders the McCarter Highway, which runs along the Passaic River. The $34 million park, which makes it one of the most expensive minor league parks in America, is finished enough to play baseball – the concourse and all the seats are complete, as are the clubhouses down the left field line. But the second level – what will become the press and broadcast booths and luxury boxes – is still under construction. A drawing in the program shows what the place will look like, with landscaping and a courtyard surrounding it, when construction is complete. Parking is conveniently close for $4.

These young Bears – who played last season in Bridgeport, Conn., and the first part of 1999 at Skylands Park in Augusta – are owned by former Yankees and Mets catcher Rick Cerone, who was at the turnstiles when the gates opened. Cerone spent much of the game in the stands, signing autographs and even dancing between innings at one point.

Whether or not current players, such as former Yankee Hensley “Bam Bam” Meulens, know anything about Newark’s history, the game program does a fine job of reminding the fans. Old photos of both the Bears and Eagles appear on the cover and throughout the magazine, along with an article on the history of the current stadium’s site as well as team history. It’s the best program I’ve seen after visiting five parks, with detailed player profiles and lots of information about the team history and how Newark got baseball back.

Even the mascot, Rip ‘N Ruppert, gets his name from the past – Ruppert Stadium, where those Bears and Eagles used to play in a park named for one–time Yankee owner Col. Jacob Ruppert.

Mom and I settled into our $8 seats just beyond first base, and the first few innings of Tuesday’s game went quickly. The Bears’ Tim Cain and the Bridgeport Bluefish’s Al Sontag battled to a 2–1 Bridgeport lead after four innings. In the fifth, shortstop Cesar Morillo and third baseman Meulens sent back–to–back home runs toward McCarter Highway for a 3–2 Bears lead. Cain couldn’t hold it, though, and Bridgeport scored two in the eighth and one in the ninth for a 5–3 victory.

Morillo’s homer, because it was the Bears’ first of the night, won the couple next to me a free dinner. Later in the night, two more couples competed for Great Adventure tickets. The men tossed up water balloons and the ladies had to hit the balloons with bats. It certainly cooled them off. If you’re interested in winning, be sure to sign up for the promotions along the concourse.

As far as food – when it’s not under– or over–cooked, it basically tastes the same at all ballparks, with slight differences in selection. I had a decent $2.25 hamburger (again, like the Jackals’ game, no cheese) and a great $2 pretzel. Beer – Coors, Coors Light, Sam Adams, Killian’s – cost $3.25 to $4. Mom said the hot dogs were good and hot, and the service was very nice. Chicken sandwiches and bags of chips were also available.

The attendance Tuesday was announced at 2,623, but there was a sense that it went way beyond the 6,100 capacity of the Den. With the Bears back in town, Newark has 50 years of baseball to catch up on.

DIRECTIONS: Take the New Jersey Turnplike to Exit 15W. Get on I–280 West to Exit 15A (Route21) Follow signs for Route 21 South– also McCarter Highway. Turn right onto Route 21. At the second light, turn right onto Bridge Street. The stadium will be on the right.

« Statistical comparison: Val Majewski and Charles Frazier
Round and round he goes, where Beltran lands nobody knows »