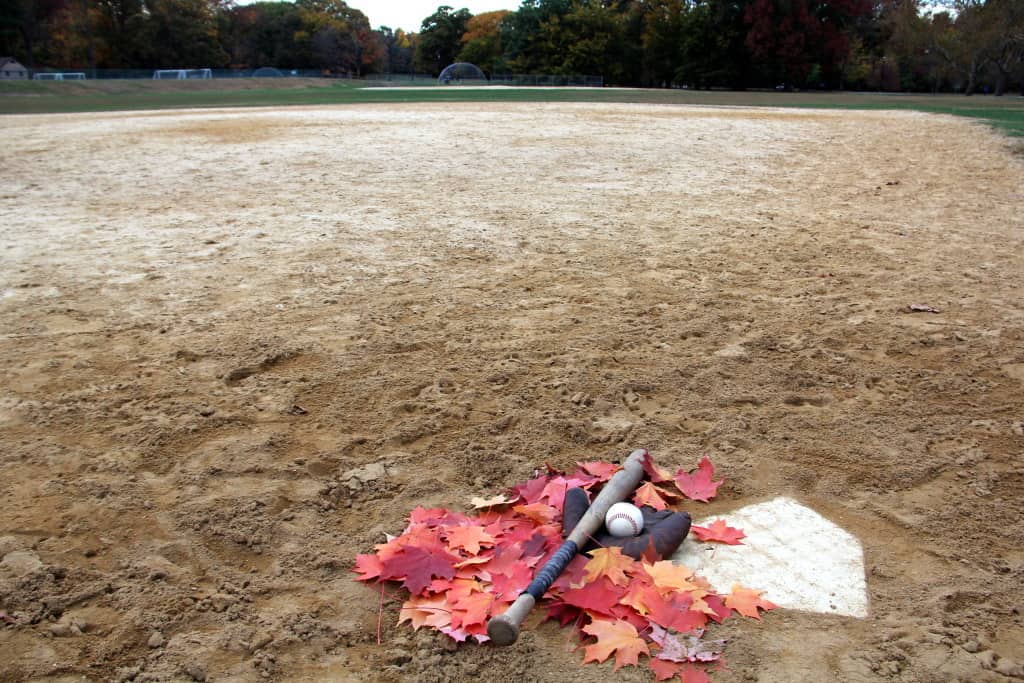 “It breaks your heart. It is designed to break your heart. The game begins in the spring, when everything else begins again, and it blossoms in the summer, filling the afternoons and evenings, and then as soon as the chill rains come, it stops and leaves you to face the fall alone. You count on it, rely on it to buffer the passage of time, to keep the memory of sunshine and high skies alive, and then just when the days are all twilight, when you need it most, it stops. …

“It breaks my heart because it was meant to, because it was meant to foster in me again the illusion that there was something abiding, some pattern and some impulse that could come together to make a reality that would resist the corrosion; and because, after it had fostered again that most hungered-for illusion, the game was meant to stop, and betray precisely what it promised.”

– A. Bartlett Giamatti, “Green Fields of the Mind,” as many of you knew right away.

I’ve always loved that first passage, the opening to Giamatti’s most famous essay, particularly the imagery of autumn: … and then as soon as the chill rains come, it stops and leaves you to face the fall alone. But today, it’s the first four words: It breaks your heart. It broke the hearts of Mets fans last night. The promise of the postseason that began with a two-week surge — a win in L.A., the offensive slide of Utley and the unjust resolution, the rout in Game 3 (Citi Field’s first postseason game), the clincher in Game 5, the dominance over the Cubs, the unprecedented streak by Daniel Murphy — came to a gut-wrenching, -twisting, screeching halt last night.

I think if, in March, Mets fans were told the team would fall three wins shy, we would’ve said, “Of .500?” Then, when told, “No, of a World Series championship,” I think we would’ve signed up right there. We entered this season hoping for those long-sought “meaningful games in September,” of a winning record, of maybe challenging for a Wild Card berth. Then came August, the return of David Wright, the bat of Yoenis Cespedes, a sweep of the Nationals and a trip through Denver and Philly that produced seven wins and 10 runs per game. If they can hit half this well, we thought, with their pitching, they might make a run in October.

And they did, proving along the way that good pitching beats good hitting. It worked in L.A. and Chicago, and it might’ve worked against the Astros or Blue Jays, if only Houston had put away Kansas City when the governor of Texas thought they had it. And that adage held true in the World Series — for the Mets’ starters. Matt Harvey made up for Game 1 with his Game 5 performance, and Noah Syndergaard and Steven Matz more than held their own. Only Jacob deGrom didn’t live up to the postseason standard he had set for himself, but had the Mets won Game 5, he had the chance to redeem himself in Game 6.

But the Royals showed that good hitting — good contact hitting — beats bad relief pitching and shaky defense. The Mets don’t have many holes to fill, but I full expect them to focus on defense (particularly up the middle, at second base) and the bullpen. Murphy and Cespedes are most likely gone, and while I’d love to have the August Cespedes back, he’s as streaky as anyone, and the Mets already have that with Lucas Duda. So maybe, as I’ve seen suggested, they thank those two and let them walk, and spend the money on the pieces they need and on locking up those excellent starting pitchers.

Harvey excepted, of course. There’s no way his agent will go for an extension before he hits free agency. But as last night showed, he’s a guy I’d want to have the ball for my team in a do-or-die game. (So are deGrom and Syndergaard — especially after that first pitch of Game 3.) I don’t fault Harvey for fighting for the ninth, and I don’t fault Terry Collins for letting him have it. There are obviously some questions about letting him have a second batter, but I have no problem with letting him start the inning. Had he finished off the game, that would’ve been something.

But I’m not going to pick apart the problems with last night, with what went wrong in the World Series. So much went right with this team, particularly starting with the decision to back out of the Wilmer Flores–Carlos Gomez trade. If that deal happens, the Mets might never have made the playoffs, and we’d be heading into next season without Flores and without the promise of Zack Wheeler sometime around the All-Star break.

No, I’m not going to dwell on these last four losses. I’ll remember that the Mets continued their NLDS dominance (they’ve never lost a Division Series), swept away the Cubs, and provided me with amazing memories and experiences at NLDS Game 3, NLCS Game 2 and World Series Game 3. I’ll remember that Syndergaard’s first pitch was high to Alcides Escobar (not at his head — it wasn’t even inside the batter’s box) and it made a difference, and I’ll remember that it only took a moment to realize that Wright’s fly ball was a home run.

And in February, when pitchers and catchers report, I’ll try not to get too excited about a rotation of — in some order — Harvey, deGrom, Syndergaard, Matz, and whoever will keep a spot warm for Wheeler and how they’ll stack up in October.

Man, just wait til next year.