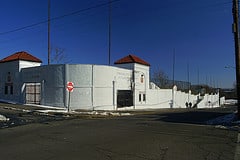 Here, the ghosts of past indiscretions — others’ indiscretions — still play. Tucked into a corner of Paterson, New Jersey, stands a massive stadium now overgrown with more than just grass and weeds. Trees sprout from the bleachers, shrubs grow on the benches. It should be hard to miss, such a huge multipurpose arena that stretches two blocks in one direction. But it’s nestled into a hill, never appearing more than a story high, tucked behind a four-story school that looms over it like a fortress.

Not far from another corner lies one of New Jersey’s great natural and industrial landmarks, the Great Falls of the Passaic, a spot of historical significance in the life of Alexander Hamilton and in the industrial history of America. But from the falls, Hinchliffe Stadium looks like another abandoned industrial relic, a dilapidated warehouse complex or a facade fronting a high school football field.

At one time, that’s what Hinchliffe was, home to Paterson Eastside High School teams. It’s where Larry Doby played before the Newark Eagles signed him, setting the stage for his Hall of Fame career that began with the Cleveland Indians. 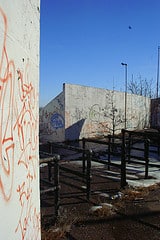 Now, the stadium lies in crumbling decay. A walk down Maple St. allows for a peak into vandalized restrooms and gated entryways, the white of the stadium walls nearly blinding in the sun, yet splashed with the color of graffiti on nearly every open space within arm’s reach. Curiously, the spray-painting Picassos seemed to have left the outside facade as pristine as the day the stadium opened, 75 years ago this September, when a coordinated effort under the cover of night could clearly have allowed an adept artist the opportunity to leave his mark there as well. Perhaps they did, only to have their efforts plastered over, but it is inside where their work remains, giving Hinchliffe the appearance of a plausibly functional structure upon first glance, saving its true identity and sad state of decay only for those who take the time to venture closer. 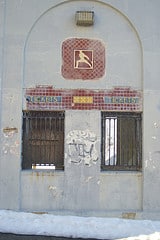 The ornate tiles marking the ticket windows and the bronze reliefs of track and field athletes of various pursuits preserve time and tag the stadium as a great multi-use facility, one that regularly and easily hosted baseball, football, soccer, track and field, boxing, concerts and any number of other forms of entertainment and recreation. It’s not hard to imagine passing by the gates on a hot summer night 50 or 60 years ago and hearing the roar of the crowd flow over the walls into the streets of Paterson.

I walked the length of Maple St. along the outer wall of the stadium. At the parking area at the bottom, I took the path that led to the overlook at the falls, the stadium blending into its surroundings more with each step I took. Looking back from the falls, the stadium was a simple white wall running up the block, a grove of trees stretching to meet it at the lowest corner. As I returned to my car, I followed a path at this point and found the lower end of the stadium closed off by merely a chain-link fence. Here my view was uninterrupted, save for the metal strands of the fence and the piles of brush and the growing weeds and saplings along the boundary. I stood at the far turn of the track, a light dusting of snow covering the Astroturf field, a blue shipping container somewhere near midfield, perhaps abandoned after a cleanup attempt or maybe the last remnant of what could have been the stadium’s last, most recent purpose: storage, or a parking lot of sorts. 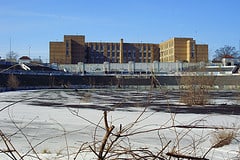 There used to be a ballpark

There is a movement backed by New Jersey’s representatives in Congress to have the Great Falls Historic District established as a National Park, Hinchliffe Stadium included. Perhaps someday, the stadium can be cleaned up, renovated to an extent, re-opened for tours or maybe even games once again. Any refurbishment would serve as an adequate reminder, a fitting tribute to those who performed there, from Doby and Josh Gibson and Satchel Paige to Duke Ellington and Lou Costello and the high school students who played on that field for decades.

Today, if you go there and look out on the overgrown field and dilapidated bleachers, you can imagine the ghostly figures rounding the bases, the fans leaping to their feet to cheer, the sun sinking behind the school on the hill to the west. Hinchliffe Stadium feels old. It feels important and poignant, yet it also feels dirty and disgusting, the acrid smell of decay and neglect — of disrespect — having seeped into the cracks in the concrete and overwhelming what remains of the structure. What could be a venerated landmark in the history of New Jersey, the progress of America, instead remains just another boarded-up relic, another glaring example of disrespect and neglect.

« In a change for baseball, A-Rod says something
Byrd or puffer fish? »