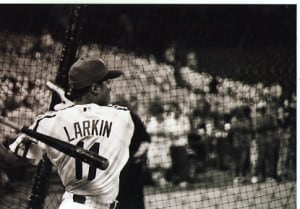 I suppose I’m a couple days late on the Barry Larkin post, but that’s because I don’t really have anything to add. I never had a strong feel either way for his candidacy, but I suppose I now see him as more a Hall of Famer than not. He was among the shortstops who “changed the position,” as they like to say (not the shortstops themselves, saying that, but other people), and he was probably the National League equivalent of Cal Ripken Jr. — only without the consecutive games played streak or the Q rating. Plus, now the 1990 Reds have a Hall of Famer.

But then I remembered I had this photo — taken during his last season, when he was named to his last All-Star team. It’s one of my favorite shots from that weekend, when I was in Houston to cover the celebrity softball game but got to stay for everything else — and then fly back to Newark sitting next to one of Tom Gordon‘s sons before chatting with Harold Reynolds at baggage claim.

The other Larkin memory I have is how he rejected a trade to the Mets in 2000 because they wouldn’t give him a three-year extension. I’m not sure Larkin would have been the difference in the 2000 World Series, so in hindsight it looks like a wise move by the Mets considering that Larkin only played more than 70 games once in those three seasons from 2001-03, and Jose Reyes debuted in June 2003.