It’s not Adrian Gonzalez, though it may be by the end of the season … depending on if (or when) San Diego trades him. Gonzalez entered the season needing 34 home runs to claim the top spot from an original Padre whose name you probably don’t know unless you’re a big Padres fan or have committed to memory the franchise home run leaders for each team. Ladies and gentlemen, the all-time leader in home runs by a Padre, No. 17 in your scorecard, Nate Colbert!

The 6-foot-2, 190-pound first baseman and outfielder hit 163 home runs in San Diego from the club’s inception in 1969 until he was traded to the Tigers after the 1974 season in a three-team deal that sent Ed Brinkman to the Cardinals. Colbert’s season-high was 38 long balls, accomplished in 1970 and ’72, and he averaged 27 a season in his six summers in brown and gold. 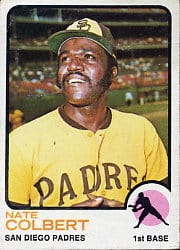 Every slugger to play for the Padres since has left the team one way or another, never to get closer than seven dingers of Colbert’s 163. Phil Nevin ranks second with 156, Dave Winfield hit 154, Tony Gwynn — not a slugger but on the list because of his longevity — hit 135, Ryan Klesko launched 133 and Gonzalez now has 132, having recorded two already this season.

Maybe it’s the Curse of Nate Colbert. Hank Aaron told the Detroit media following the deal that Colbert was unhappy in San Diego and welcomed the trade to Detroit. Whatever the reason, no one has managed to surpass Colbert’s home run total for the Padres.

With that in mind, I went through each franchise’s career long ball leaders to see who’s got a stranglehold on the top spot — curse or not — and which ones might soon fall. Home run totals for active players are through Sunday’s games.

ATLANTA
Leader: Hank Aaron, 733. Active leader: Chipper Jones (third), 427. As good as he is, Chipper’s not going to get there. Even second place on the list, held by Eddie Mathews with 493, is in question with his age and injury history. But from the accolades in the media, it sounds like Jason Heyward’s countdown to whatever Barry Bonds’ total was (755 is still the highest home run total I have memorized) has already begun. (Seriously, though, Heyward is fun to watch. As a Mets fan, my dislike of the Braves has subsided since 2006 and replaced by the Phillies, but I think Heyward will bring it back up soon.)

BALTIMORE
Leader: Cal Ripken, 431. Active leader: Miguel Tejada (24th), 103. Had I written this post at the end of last season, Melvin Mora, whose 158 home runs rank 11th, would have been the candidate. Tejada’s not a threat, either, and it’s too early to tell whether any of the Orioles’ young core of Nick Markakis, Matt Wieters, Adam Jones or Nolan Reimold will have both the power and the longevity to break into the top five.

CHICAGO CUBS:
Leader: Sammy Sosa, 545. Active leader: Aramis Ramirez (10th), 189. I can’t see anyone approaching Sosa (or Ernie Banks’ 512) without a Sosa-like, ahem, surge. With a career-average 30 homers (though he hasn’t reached that number since 2006), Ramirez can climb to seventh. He’s currently just one behind Hack Wilson’s 190.

CHICAGO WHITE SOX:
Leader: Frank Thomas, 448. Active leader: Paul Konerko (second), 322. Paulie K. is the only active ChiSox in the top 10 and even his fast start (three homers in the first week) won’t be enough to approach Thomas, because Konerko is in the last year of his contract.

COLORADO:
Leader: Todd Helton, 325. Active chaser: Brad Hawpe (eighth), 113. Perhaps one day we’ll be talking about the Curse of Todd Helton with the Rockies. Troy Tulowitzki is 10th with 65 homers.

FLORIDA:
Leader: Mike Lowell, 143. Active leader: Dan Uggla (fourth), 122. Uggla’s first home run this year tied him with Gary Sheffield and he’s now seven behind Derrek Lee’s 129. Uggla has never hit fewer than 27 in his four seasons with the Marlins, and 22 more this season will give him the Florida franchise lead. But maybe not for long. Hanley Ramirez, because I know you’re wondering, is ninth, with 104. If he can match his career high of 33, Ramirez will climb into the top four at 136. Miguel Cabrera remains second in Marlins history with 138 — the consequence of being traded from a new franchise to an original one. And 10th on the illustrious Marlins home run list? None other than Alex Gonzalez, the one still playing, in Toronto.

HOUSTON:
Leader: Jeff Bagwell, 449. Active leader: Lance Berkman (second), 313. The Astros hold an option on Berkman for next season, and even if he were to somehow come back from the disabled list and hit his career average 34 homers this season and next (and he hasn’t reached that number since 2007), he’d only have 381. Craig Biggio is third with 291.

KANSAS CITY:
Leader: George Brett, 317. Active leader: David DeJesus (20th), 56. The Manalapan High and Rutgers graduate became the Royals’ active leader in the offseason, when John Buck (15th, 70 homers) and Mark Teahen (19th, 59) left via free agency and was traded, respectively. Brett’s mark is pretty safe. Considering the Royals’ recent history and financial resources, it’s hard to speculate if a young, developing star like Billy Butler (33rd, 41) will stay in Kansas City long enough to crack the top 10. No. 2 on the list is Mike Sweeney with 197, and Carlos Beltran checks in at No. 8 with 123.

LOS ANGELES DODGERS:
Leader: Duke Snider, 389. Active leader: Andre Ethier (32nd), 75. Duke is pretty safe. He’s one of three sluggers in the top four on this list who played in Brooklyn; Gil Hodges (361 homers) is second and Roy Campanella (242) is fourth. The home run leader in the Chavez Ravine era? Eric Karros, with 270.

MILWAUKEE:
Leader: Robin Yount, 251. Active leader: Prince Fielder (eighth), 160. Prince is tied with Paul Molitor and should he reach 40 for the third time in four seasons (his career average is 38) in 2010, he’ll climb to fifth, just one behind Cecil Cooper’s 201. Another 40-homer year in 2011 — currently the last year the Brewers have him under contract — gets him to second place and 240, within 11 of Yount. So there’s a good chance Fielder becomes the Brewers’ franchise leader with a.) either two huge years in ’10 and ’11 or b.) a long-term contract extension. Prince’s 160 home runs are already the Brewers’ Miller Park-era franchise high — he passed Geoff Jenkins’ 148 last year — but Jenkins still holds their National League mark with 212.

MINNESOTA:
Leader: Harmon Killebrew, 559. Active leader: Justin Morneau (ninth), 165. At his average pace of 31 per 162 games and signed through 2013, Morneau would climb to third with 287, just six behind Kent Hrbek. But the Twins move into Target Field today, a new outdoor ballpark with dimensions that are believed to benefit the left-handed power of Morneau, Joe Mauer and Jason Kubel. So should he stay healthy, Morneau will likely get to 300 and take over second place before his deal is up. Even the Minneapolis record is safe for the life of Morneau’s contract, because Killebrew hit 475 after the team moved from Washington.

NEW YORK METS:
Leader: Darryl Strawberry, 252. Active leader: David Wright (fifth), 141. I’m not going to project where Wright will end up until after this season, when we see how he responds in his second year at Citi Field. He needs 15 more home runs to pass Dave Kingman for fourth place and current hitting coach Howard Johnson is third with 192. Mike Piazza hit 220. Carlos Beltran sits sixth, with 127 long balls with the Mets, and it’s a shame he’s missed so much time last season and this with injuries, or he’d be setting his sights on Kingman as well.

NEW YORK YANKEES:
Leader: Babe Ruth, 659. Active leader: Alex Rodriguez (ninth), 238. A-Rod may break Hank Aaron’s record (for a right-handed hitter) and he may surpass the Bonds number, but he might not catch the Babe for pinstripe power. At his current average of 43 per 162 games and with his contract carrying through the 2017 season — and that’s being generous to give him 43 homers a year through the end of the deal — Rodriguez would only get to 582. In fact, Mickey Mantle’s 536 might be the number to shoot for, considering A-Rod’s age at the end of his contract (39, 40 and 41 over the last three years). Rodriguez will pass Jorge Posada this year, and Derek Jeter ranks 10th on the Yankees’ list.

OAKLAND:
Leader: Mark McGwire, 363. Active leader: Eric Chavez (sixth), 229. It’s a shame Chavez has had so many injuries, because there’s no telling where he’d rank, considering second place on this list is Jimmie Foxx with 302. Chavez hasn’t homered since June 17, 2008. Next on the active list behind Chavez is Mark Ellis at 33 with 80, so no movement in the top 10 is imminent, outside of Chavez.

PHILADELPHIA:
Leader: Mike Schmidt, 548. Active leader: Ryan Howard (fifth), 225. Howard’s three homers this year already moved him up a notch and another 40 — and yeah, he’s averaged 49 per 162 in his career — would secure second place, above Del Ennis’ 259. Howard’s playing this season at 30 years old (he was born in November 1979) and would have 265 even if he hits a career full-season low of 43 in 2010. Schmidt, born in September 1949, had 283 when he finished his age-30 season in 1980. But Schmidt only averaged 37 per 162 and didn’t play in a bandbox. Yes, Howard has the power to hit it out of any ballpark, but I’m sure he’s benefitted from some first-row landings over the years, especially to the opposite field.

SAN DIEGO:
Leader: Nate Colbert, 163. Active leader: Adrian Gonzalez (sixth), 132. Next up, should Gonzalez not get there before a trade, is … Scott Hairston. He ranks 35th with just 36 homers as a Padre. This franchise has had so little in terms of power hitters that Kevin Kouzmanoff, the third baseman traded to the A’s in the offseason after just three seasons at PETCO Park, ranks 20th with a mere 59 dingers. Khalil Greene is in the top 10, with 84, tied for ninth with Fred McGriff.

SAN FRANCISCO:
Leader: Willie Mays, 646. Active leader: Bengie Molina (55th), 55. Had Rich Aurilia managed to force his way into a bench spot, he’d be 15th on the list with 143 homers, but with his retirement over the weekend, it falls all the way to Molina. Bonds’ 586 couldn’t pass his godfather overall, but he did pass both Mays (459) and McCovey (469) in San Francisco.

TAMPA BAY:
Leader: Aubrey Huff, 128. Active leader: Carlos Pena (second), 117. Here, folks, is your least powerful franchise. The Rays’ top 10 — which goes 11 players deep because Jorge Cantu and Toby Hall are tied for 10th with 44 long balls — averages out to 73 homers per player, the lowest of any club. Huff last played for the franchise in 2006. Carl Crawford is fourth with 85 and Evan Longoria, with all of 1,206 plate appearances in two seasons, is sixth with 62. In fact, Barry Bonds’ “record” 73 homers in 2001 would put him fifth all-time in Tampa Bay franchise history had he hit them in green and black.

WASHINGTON:
Leader: Vladimir Guerrero, 234. Active leader: Ryan Zimmerman (13th), 91. That’s right, Mr. National is the active chaser of Vlad and, as a result, the leader since the franchise moved to Washington. My favorite part of this list is Nos. 31-32. Brian Schneider hit 47 homers in his eight years with the Expos/Nationals from 2000-07. Alfonso Soriano, in his one and only season in D.C., hit 46.

« Diving into Mets history
Catching up on Brodeur »