Remember to Vote Wright! Click the button on the right –>

The way I see it, there are three third basemen in the National League who deserve consideration to start the All-Star Game. Ryan Zimmerman is up there with solid numbers across the board (and someone has to represent the Nationals if it’s not Stephen Strasburg). Scott Rolen is having a great bounceback year in Cincinnati. And David Wright is proving that last year’s power outage was a fluke brought on by the adjustment to Citi Field or the lack of protection in the Mets’ lineup after all the injuries. Or both.
The reason I’m so gung-ho for Wright to get the starting nod is partly because he’s the only one who has a chance to catch inexplicable leader Placido Polanco and partly because he’s been my favorite Met since the day he first donned the uniform. As I did with Gregg Jefferies as a child, I latched on to Wright when I first noticed his name in the minor leagues and I haven’t been able to let go.
Not sure Wright deserves it over Rolen or Zimmerman? Go ahead, click through the sortable stats for NL third basemen. Wright’s at or near the top of just about every category (not to mention he leads the NL in RBIs). Want one of those new-fangled stats to convince you? He has the edge on Zimmerman in WAR and they pretty much are leaving the rest of the league in the dust. And while fielding metrics are still up for debate, something has to be said for Wright leading the league in total chances and playing an all-around solid hot corner this year.
Seriously, what’s not to like? 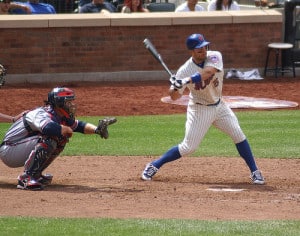 « VOTE WRIGHT! It’s your duty as a fan
Wright closes ground on Polanco in balloting »