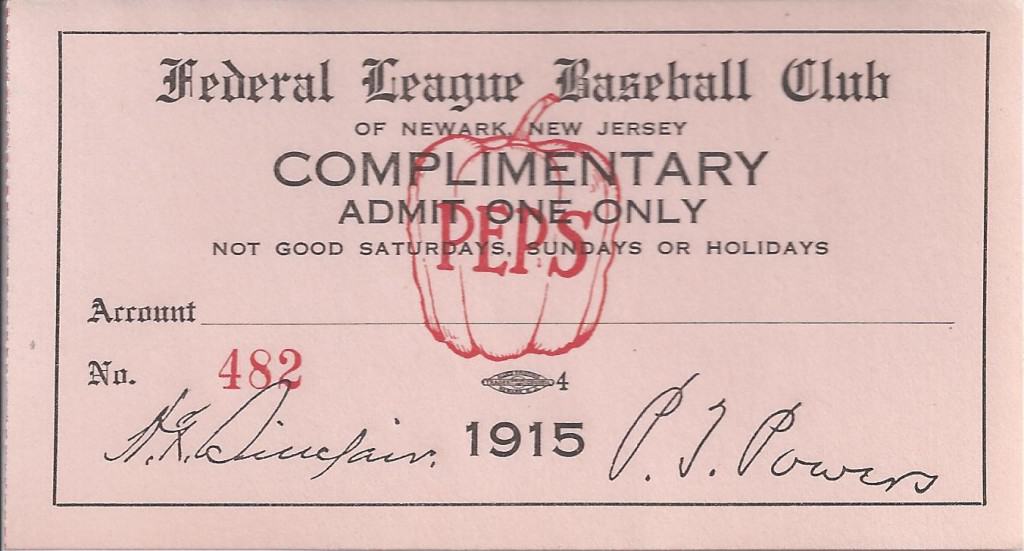 After sweeping the Terrapins in Baltimore to begin their existence 3-0, the Newark Peppers traveled up to Brooklyn’s Washington Park and lost two games to the Tip-Tops.

Harry Moran lost the first one after taking a 7-5 lead into the ninth inning. Brooklyn player/manager Lee Magee opened the inning with a single and stole second. After Benny Kauff‘s flyout and Steve Evans‘ walk, Magee scored on Hap Myers‘ single to make it 7-6. With Evans on third following the single, Myers stole second, setting up Tex Wisterzil to be the hero. Wisterzil “sent the ball skimming over second base” into center field for a two-run single and an 8-7 Brookfeds victory.1

The next day, the Peppers trailed 3-2 after four, but the Tip-Tops blew it open with a 10-run fifth on their way to a 17-6 win. Wisterzil completed an amazing two-game series with a 4-for-4 day, scoring two and driving in three. In the two contests, he went 7-for-7 with three runs, five RBIs and three walks. Magee was 6-for-9 with five runs, three steals (including home once) and two RBIs.

So Newark came home for the first major league game in New Jersey with a 3-2 record in third place, one game out of first.

Newark and its surrounding hamlets were seized with a violent attack of baseball yesterday, accompanied by a high fever and laryngitis. The ailment can be directly traced to the opening of the Newark Federals at their new, roomy park in Harrison. The epidemic spread among nearly 25,000 Jersey folk who jammed the new park to see “Whoa Bill” Phillips’s “Peps” make their home debut against Otto Knabe‘s Baltimore Terrapins. The only thing the “Peps” won was admiration. They lost the ball game by a score of 6 to 2.2

Newark celebrated the opening the way the Reds or Cardinals do to this day. “Everybody in Newark and its environs quit work when the whistle blew at 12 o’clock, put on their new Spring spangles, and got ready for the big parade. It was just like Fourth of July or circus day.”3 Fans joined in the parade with banners, walking or riding in automobiles, and brass bands and drum corps brought rhythm to the proceedings. It seems like no one in the area of Newark and Harrison missed the festivities:

All of the uniformed amateur baseball teams from the entire countryside walked till they were tired. Then there were droves of Boy Scouts. There were no Girl Scouts in the parade, but they lined the sidewalks, scouting the male population in the parade. A band of Scotch bagpipers added all the rare musical notes which the brass bands and the drum corps failed to furnish. The Elks and the Eagles and other fraternal organizations completed the parade. A find body of men.4

Pregame ceremonies included team president Pat Powers, Federal League president James Gilmore and Newark mayor Thomas L. Raymond, who delivered the ceremonial first pitch from the pitcher’s box — a strike, according to The Times. Cy Falkenberg got the start, just as he did in the first game in Peppers history. Falkenberg once again went the distance, but this time took the loss, with two of the runs unearned because of several errors behind him. One box score shows three — one by third baseman Bill McKechnie and two by shortstop Jimmy Esmond — but the report in The Times describes a third for Esmond.

The Terrapins scored once in the third and once in the fifth before the Peps responded. “In the fifth inning the big crowd went almost loco because the Newarks tied the score,” The Times reported. Al Scheer led off with a single and took third on Bill Rariden‘s base hit to left-center, but when the throw to third went into the stands, Scheer scored. Falkenberg then singled to plate Rariden. But in the eighth, Harry Swacina broke the tie with a two-out single and Falkenberg then yielded three runs in the ninth.5

But as with many Opening Day events today, the result of the contest was perhaps mere background to what the game itself represented, what having a team in the Federal League meant to Newark. A dispatch in Sporting Life painted an even more joyful — and hyperbolic — picture than The New York Times did.

NEWARK OPENING
A Red Letter Day in Newark Annals Was
the Federal League Start in Newark,
Which Proved Itself Major League in
All Ways.

NEWARK, N.J., April 19.–Newark’s debut in the Federal League as a major league city was all that could have been wished or asked for by the most ardent Federal League partisan. Acting upon a request of Common Council, Mayor Raymond, on Tuesday last, issued a proclamation suggesting that business houses, wherever possible, make Friday, the opening day of the local Feds, a half holiday, inasmuch as Newark now has been placed on the big league base ball map. The Mayor also suggested that business and private houses be decorated. The Mayor’s proclamation was generally obeyed and this made the opening game with Baltimore on Friday, April 16, a

annals. Dewey’s triumphant return from Manila, Lee’s surrender at Appomattox Court House, Ban Johnson’s formation of the American League, “Red” Ames’ home run back in 1909, all dwindled to the picayune dimensions of a razor bout over at San Juan Hill when compared with the proud entry of the Federal League into Newark on Friday afternoon. At least, that’s what the folks here in Neweark thought about it, and they certainly proved themselves big leaguers in enthusiasm and ability to run big things. More than 26,000 persons jammed into the new Federal park in Harrison, and, while the occasion was somewhat dimmed by the home team’s defeat by Balitmore, 6 to 2, the fans never lost faith in Bill Phillips‘ men and yelled until the

The opening was a big feather in Newark’s cap, and credit belongs also to Harrison, Jersey City, the Oranges and other outlying sections. Even a little band of loyal Newark rooters came all the way from Princeton to celebrate the city’s entry into big league ranks. It had been expected that Jersey would do itself proud, but not even the most sanguine supporters of the club looked for the jam that taxed the capacity of the grounds. It was a bigger crowd by about 3000 than that which attended the Giants’ opening at the Polo Grounds last Wednesday.

THE PARADE AND THE PARK

If there were any clocers from Organized Ball there they had to put their hands in slings an hour before game time. The celebration included a parade from Newark to the park, in which half a hundred amateur and semi-professional uniformed teams, boy scouts, automobiles bearing the players, and city, State and Federal officials were in line. The new ball park was not quite completed and it will take at least two weeks more to put it into shipshape; but it was ready to receive the big crowd. The size of the playing area was a big revelation to the New York scribes. As an example it might be stated that the right-field foul line extends 397 feet from the plate to the fence.

The get down to the game–it was more or less of a scrap between southpaw Bill Bailey, of the Terrapins, and Cy Falkenberg, the elongated slant server of the Peps. Cy was outpitched by a big margin, but he might have emerged with a closer decision but for some poor work by Jimmy Esmond. Jimmy inserted a couple of bobbles, of course at the wrong time, and but for charitable scoring might have been charged with a third costly error, but, in the spirit of the occasion, we gave Meyer a single and let it go at that. All in all, it was a rattling good big league exhibition.6

From that description, if every Federal League opener was like that, and every Sunday half that, the outlaw circuit might have returned in 1916. But in the end, Gilmore’s organization could not sustain the enthusiasm.