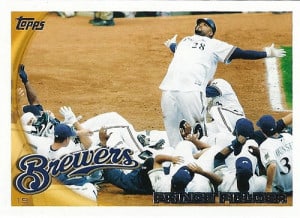 Every year, I buy myself a pack or two of the new Topps cards to see what they’ve come up with, and this year I may be buying quite a few more. The new design is one of the best in recent memory, and their cards of late haven’t even been that bad. Compare that to 20 years ago, when the 1990 set looked like something out of the ’70s (though the ’70s sets weren’t even that garish) and couldn’t even coordinate colors for the same team.

This Prince Fielder card happens to be No. 1 in the set, starting the collection off with a bang by using a great photo from Fielder’s walk-off shot on Sept. 6 last season. This card didn’t come in my first pack; after that initial purchase, I bought a small box — I think it was the “cereal box,” the one with Gehrig on it, it turns out — and when I got home to open them, I noticed that each one contained a Gold Refractor card. “Hope I get Seaver,” I thought. 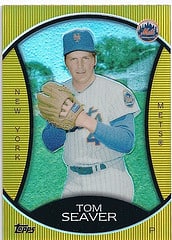 And then I got it. Sweet!

I also found Jeff Samardzija, Carlos Delgado(‘s last card/last card as a Met), Victor Martinez and Andrew McCutchen, among others. The team logo — taken from the jersey front, it seems — as a means to ID the club is unique and one of the first things that jumped out at me, especially on the McCutchen and V-Mart cards. The backs are sharp, too, with the hat logo and a clean, easy-to-read design, especially on one loaded with stats like Delgado’s.

But these days, it seems the point of collecting isn’t the cards of current players; it’s the subsets and bonus cards in each box. The Seaver in the “cereal box” was a good start. As I went through the cards, I found Peak Performance cards of Ty Cobb and Tris Speaker, History of the Game featuring Cal Ripken and Bill Mazeroski, Tales of the Game reminding us of Wade Boggs’ chicken infatuation, Legendary Lineage linking Roy Halladay (thankfully in a Blue Jays uniform) with Seaver and pairing Frank Thomas with Fielder, and something called the Turkey Red subset (from which I got Mark Teixeira and Johnny Bench). My favorite is probably the When They Were Young group, depicting today’s stars as children — and it’s not even limited to Little League photos. 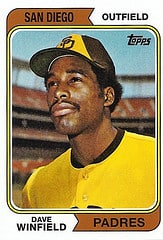 The big subset/promotion/gimmick this year, though, is The Cards Your Mother Threw Out. My first one? A 1993 Chuck McElroy! Score! At least, that’s the first one I got with the code, allowing me to have the actual card sent to me if I choose. (I suspect I’ll pass.) But in the “cereal box,” I did get two replicas. The cool one was a 1974 Dave Winfield, his first card. The front is a high-def reproduction of the card itself; the back, which I didn’t scan, describes the history of the card and/or player that year. The second I opened wasn’t as exciting — a 2008 Tim Lincecum. I mean, those cards are two years old! I bought some that year. I think I may have this actual card. I understand the idea of including every year in this historical promotion, but it just seems funny to me. Though, I shouldn’t complain (and I’m not, really); that ’08 Lincecum is still better than a ’93 McElroy.

Unfortunately, I don’t know how many of these cards I’ll eventually get. The price today is just too prohibitive. I can’t imagine being a kid today and finding myself that interested in baseball cards. Unless allowances have kept up with the rate of inflation, how can a kid afford to collect cards on a summer-lawn-mowing income? And for the completists, how can you ever feel satisfied about collecting an entire set when sets these days include so many rare and valuable cards, from autographs to relics and the like, that anyone who manages to legitimately collect a full set probably spent as much money doing so as the most valuable piece in the set is worth. Still, I’m sure I’ll buy a few more packs, another box or two. I’ll keep the purchases to extra additions when I’m at Target or some place for another reason — no more walking down to the corner drug store for the sole purpose of buying baseball cards. Sadly, those days have gone the way of my dirt bike and, well, the corner drug store not named CVS or Walgreens.