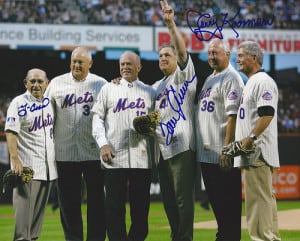 Nearly one year ago (Jan. 30, to be exact), I got the first autograph on this photo. This weekend, I added two more to reach the halfway point.

First, on Saturday, I drove up to White Plains for a show to get Jerry Koosman’s signature. It was iffy, though — the snow wasn’t cooperating. So the ride took a little longer than usual, but I made it with no hassles. I parked — for $5, which is lame (last time at this venue, the Westchester County Center, I accidentally parked in a small back lot, where there was no attendant) — and went inside to buy my Koosman autograph ticket. There was no line, so I walked right up to get the signature, then browsed a few dealers for an Al Jackson card, because he was the free autograph with admission. I found a 1965 Topps card for a few bucks and got that signed, too.

Then today, it was out to Citi Field for a Mets 50th Anniversary show. Tom Seaver was scheduled to sign from noon to 2 p.m. I’d prepurchased my admission and Seaver ticket online a few weeks ago, so I picked them up right about noon. But this wasn’t like usual MAB shows; other than a small section of Mets merchandise and the MAB table selling baseballs and photos for autographs, and one window selling hot dogs, soggy Nathan’s fries (as per usual) and drinks, the Caesar’s Club was just a bunch of mostly Mets fans waiting. (There was one instigator in Phillies garb — a 2009 NL champs shirt, not even an ’08 World Series champs shirt — and I saw one Yankee cap, but the rest was blue and orange and some Giants red and blue.)

Despite the posted noon start time, the first Seaver tickets weren’t called until 12:45. After 90 minutes, they’d only gotten to No. 30 (I had No. 75) when the announced that he’d be taking a break for the scheduled 2 p.m. Q&A with Jim Palmer. So annoying. But then, inexplicably, 15 minutes later, they resumed Seaver with tickets 1-50, so I guess they either realized the folly of putting him on hold for a Q&A, or enough people complained. Shortly after the resumption, they called 1-80, and I entered the area of signing tables.

A rope line wound around four times, with probably about 30 people in it, and it took 15-20 minutes to get to the front. Seaver — who I’d heard could be cranky, or short, was pleasant enough, but I didn’t try to engage him in conversation or anything. After being there for three hours, and with a long line still behind me, I got my autograph and left.

So now I’m down to Nolan Ryan, Jerry Grote and Duffy Dyer. I missed a chance at Dyer last March when I had a conflict, so I hope he and Grote come back to the NYC area soon. Ryan is less likely, of course, because of his job with the Rangers. I suspect that once I get the other two, I might take a trip to Texas and try to get him at the ballpark, or at a show if I see one advertised.

And so the project continues …

« Barry Larkin as an All-Star for the last time
Braves history, give or take 90 years »