Like most of baseball, I went about my day last Monday as I normally would. I didn’t take any time out of my day to visit MLB.com and listen to the coverage of the Hall of Fame from Cooperstown, the annual exhibition that used to be played the Monday following Induction Weekend. The Cubs and Padres were to play, but Mother Nature had other ideas and washed out the game.

At first, I didn’t care. It didn’t bother me that an exhibition game I had barely paid attention to over the past 15 years wouldn’t be played anymore. It wasn’t until I read Tom Verducci’s “Requiem for the Game” that I realized that I will miss it, even if I rarely acknowledged it was there.

The truth is, the Hall of Fame Game has changed twice recently and wasn’t what it was in 1992, when my family and I saw the Mets and White Sox face off following the inductions of Tom Seaver and Rollie Fingers. The first was in 1997, when Interleague Play came along and made a Mets-White Sox or any other NL-AL matchup less unique. As a result, baseball relaxed its rules on choosing one team from each league for the game, bringing the Dodgers and Padres to town that year. (In 1986, the Royals and Rangers played the first intraleague HOF Game, but it didn’t become a frequent occurrence until 1997.) The second change was in 2003, when the Phillies (with minor league lefty Cole Hamels on the mound) and Rays played on June 16, moving the game off of Induction Weekend.

I was 15 in the summer of ’92, so there was no widespread internet, let along blogs (we called them “diaries” or “journals” back then), so I don’t know that I’ve ever written down my memories of that weekend. I do have video of it. We borrowed a camera from a family friend and my buddy Matt and I used it to record some of the induction (it was the first held at the Clark Sports Center on the outskirts of Cooperstown, instead of at the actual Hall of Fame, because of renovations there) and our tour through the museum. Not adept in video editing — and, again, not having the computer technology of “digital” and “iMovie” — we created a soundtrack by … fastening headphones to the camera’s microphone with rubber bands, and playing a cassette tape in a Walkman. We called it “Coop ’92,” and I really need to find out where that is and watch it again.

But as for the HOF Game itself, we hadn’t been able to purchase tickets before they sold out, so my mom volunteered to go over to Doubleday Field the morning of the game and wait on line for standby tickets, should any be released because of cancellations or whatever causes people to pass up an opportunity to see Major League players at a town ballfield. While she waited, Matt and I continued to explore town, particularly shops selling baseball cards, and walked around the ballpark. We met up with Mom at a designated time (because, say it with me, no cellphones then, either) and she announced that she had secured three tickets. That’s all we needed, because my sister and Matt’s had no interest in going, and since they were two years younger, couldn’t really be allowed to roam Cooperstown by themselves for three hours, so my dad volunteered to chaperone them.

While standing in line, my mom took note of all the uniformed Mets personnel who walked past her on their way from the dugout to the only men’s room at the ballpark, a park-like facility with concrete floors and, I imagine, troughs that was accessible only from the parking lot. I think she was most excited to see Howard Johnson. She was also soon approached by a man who had come to turn in three tickets he couldn’t use. There were two pairs (probably a purchase limit) that weren’t together, and his wife would be sitting in one of the seats, so after chatting up my mom, he felt comfortable having her sit with his spouse. “It’s better than turning them in and not knowing what she’ll get,” he said. So Mom became friends for an afternoon with some guy’s wife, and Matt and I sat only a few rows up from the field down the left-field line. 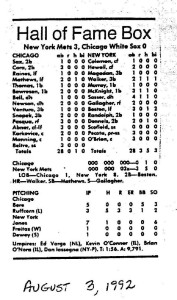 Bobby Jones — that would be Bobby J. Jones, the Mets’ first-round draft pick the previous year — was called up from nearby Double-A Binghamton to make the start, and he carried a perfect game into the seventh inning. He and two other hurlers combined on the only one-hitter in HOF Game history. The Mets won, 3-0, on a solo home run by Chico Walker (who, until I looked up the history of this game, I didn’t not recall as a Met for a single at-bat) and a two-run double by Daryl Boston, both of which happened in the eighth inning.

Boston played left field, so we saw a lot of him — particularly late in the game, when he started acknowledging us and getting the crowd along the line to chant his name. He and right fielder Dave Gallagher were engaged in a competition to see who could get the fans on his side of the field to cheer his name louder. I’m pretty sure we won it for Daryl.

Other than wanting to see Seaver (he ignored me on his way into the ballpark — my closest chance at getting his autograph in my lifetime) and White Sox third baseman Robin Ventura (who won the pregame home run derby, which I don’t remember, so we might not have had our tickets yet), I don’t recall what my expectations were for the game. (It wasn’t the best of Mets teams, though they did have a former Yankee starting at second base — Willie Randolph.) I marveled at the houses just beyond the outfield fence, clearly the best real estate in Cooperstown, I believed then — before I became a homeowner and would have to be concerned about things like broken windows. But if you’re going to have your windows broken by an errant baseball, wouldn’t you rather it be from someone in a Major League uniform than the neighbors’ kid? And before the game, when Matt and I were for some reason separated inside the ballpark, he recounted a scene he witnessed along the right-field line, when the Mets’ John Franco took a liking to one fan’s hat commemorating the game and traded his team-issued on-field cap for the fan’s commemorative lid. Even though he was a Yankees fan, I think Matt felt a little disappointment that Franco didn’t notice his hat first and offer the trade.

But now those moments are gone forever. As Verducci and Hal Bodley lamented, the HOF Game was an important link of baseball’s present and past. Both writers alluded to the big-shot player who expresses disdain at having to trek to upstate New York during the middle of the season, yet once he arrives and gets a tour and sees the quaint field nestled in the center of the quaint town, reverses course and voices his appreciation at having made the trip.

It’s a shame the game has to die, but I can see why. Verducci touches on all of them. But why can’t baseball fix it, instead of pulling the plug? The NFL has it right, but making the game a preseason exhibition tied to its inductions. But baseball can’t have a preseason game in upstate New York, not when local residents haven’t put away their shovels for the season yet in late March. What MLB could do is extend the All-Star break by a day — some teams get both the Wednesday and Thursday after the game off anyway — and stage the game on that Thursday. Every team would be off, making scheduling easier. Or simply choose from among the teams that have that extra day after the Midsummer Classic. There are only four games — that’s 22 teams off — playing that day this year.

Baseball keeps moving further and further away from the small-town, easily accessible game it was long before I was born. Many of these changes are natural, necessary and inevitable. But some of them — like bringing the big stars of the Cubs and Padres, or any other combo of teams, to a small town in upstate New York where the game is celebrated year-round — don’t have to be made. It’s a shame that this one was.

« Randolph fired in the middle of the night
Upper deck dozing »