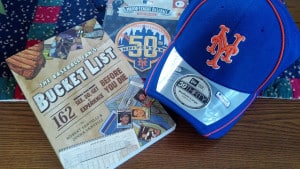 Part of my 2011 Christmas haul

I finally watched the recent episode of Studio 42 with Bob Costas in which he sat down with Tom Seaver up in Cooperstown to talk about Tom Terrific’s career. There was some great stuff in there, particularly Seaver’s opinion of the use of today’s pitchers. But he also talked about his “imperfect game” in 1969. When asked about Jim Qualls, who got the lone hit — who was the only baserunner — in that game, Seaver said he’d never faced the guy before, and he wasn’t sure if he’d ever faced him after that.

So of course I had to look it up. I went to Baseball Reference’s Play Index and drew up all of Qualls’ appearances against Hall of Fame pitchers:

Not much there. The hit in the ninth against Seaver on July 9, 1969, was Qualls’ only one against The Franchise, and he had only three other hits — of 31 in his career — off future Hall of Famers. Seaver wasn’t sure if he’d faced Qualls outside of that game, but he did, the following week in Chicago. Seaver allowed five hits and a walk and lost, 1-0. Qualls went 0-for-3.

But back to 7/9/69 — how unlikely was Qualls’ hit against Seaver? Qualls’ career was so brief (144 plate appearances in three seasons, spread over four years with three teams) that he has no comparables on Baseball Reference. And a search of other players with 130-150 career PA and an OPS under .600 (Qualls’ was .540) mostly gives you pitchers. So a present-day comparison might be Argenis Reyes — or any number of pitchers — breaking up a Justin Verlander perfecto with two outs to go. Or, from the last perfect game in the Majors, Roy Halladay against the Marlins in May 2010, the equivalent might be Bryan Peterson getting the hit in the ninth to spoil perfection.

Perfection is not easy — duh — and though the Mets one day will pitch a no-hitter (they have to, right?), there’s no telling if any of us will see a perfect game from the Amazin’s anytime soon. If anyone was going to do it, it probably would’ve been Seaver against those Cubs in the summer of ’69, just one week before Apollo 11 launched for the Moon.