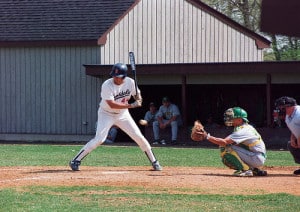 With the college season opening this weekend, I chose several photos I took in 1994. They’re of baseball games at Trenton State College (now the College of New Jersey) and Brookdale Community College. This was still early in my SLR ownership, so I was psyched to take the zoom lens out to the fields, especially since I could pretty much stand anywhere along the fence at these venues. I have no idea who any of the players are, but that’s the point for today — this is junior college ball, guys playing mostly for the love of the game. With the exception of the metal bats, it’s about as pure as baseball can get these days. With a few exceptions, these players have no professional aspirations, there are no stage parents complaining about playing time, ESPN and most newspapers aren’t coming around looking for stories. They’re just out there to play.

With the season beginning, Baseball America‘s preview content included a look ahead to the end of the season, which will feature the College World Series in its last year at renowned Rosenblatt Stadium. I never got there, and I won’t this year, which is a shame. I don’t know what the new ballpark will offer compared to Rosenblatt and whether the regular attendees of the annual tournament are looking forward to an updated, modern venue or if they’ll be lamenting the old ballyard’s loss. But I know it won’t be the same to tune in each June to watch the college championship from TD Ameritrade Park Omaha — which is among the top five worst sports venue names in America and may be at the top of the list. A shame.

But back to more positive thoughts. Two things in particular I love in this gallery: the dandelions on the Brookdale infield in the shots of the pitchers, and Brookdale’s classic-looking uniforms, which you can see in the image above: the blue lettering and red numbers on the jersey taken from the Dodgers’ clean uniform design, and the helmet (and cap) “B” logo borrowed from the Red Sox.

And yeah, the music choice may be a bit cliched, and it won’t be the last time I use a version of that song, but it just fit the photos for this one. It’s an instrumental piece recognizable from the start, no words to worry about. And though you may not know the players — no words, no names — you know the game immediately upon seeing the images. It’s just baseball.

« Excitement over Halladay
The new Topps »