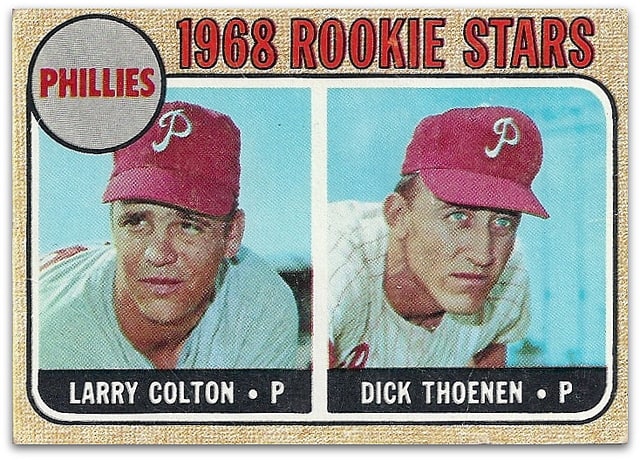 You’re forgiven if this is the first time you’ve heard of either of these players. Of the roughly 17,364 men who have played Major League Baseball, 964 of them never got into another game after their debuts — and these are two of them.


I don’t know about you, but that seemed pretty remarkable to me — that two guys who share the same rookie card ended up appearing in one game each, for three combined innings, and never got into a second game. As it turns out, they both now live in Oregon, which struck me as another interesting coincidence. I was able to find an address for a Richard Thoenen, now 67, and wrote him a letter at the beginning of the month. The return envelope arrived yesterday, with a few brief answers written beneath the questions I asked.


Born in Mexico, Mo., in 1944, Dick Thoenen was a three-sport star at Mexico High. In 1959, he pitched and played outfield on Mexico’s Junior Legion team. The big right-hander — listed at 6-foot-6, 215 pounds on his Baseball-Reference page — arrived in South Bend in the fall of 1961. “I went to [Notre Dame] on a basketball scholarship,” he told me.


He signed with the Phillies in 1963, after one season with the Irish back in the days before freshmen could play with the varsity. Asked what he remembered about signing that first contract, he said, “Shaking while writing,” no doubt excited, nervous or both. He was assigned to Spartanburg in the Western Carolinas League, where he went 10-13 with a 3.36 ERA. In mid-June, he stood atop the leaderboard with a 0.70 ERA. He pitched a four-hitter for the Spartanburg Phillies on July 29, fanning 10 Rock Hill Wrens to earn his ninth victory.


His second season was also solid but not spectacular. In a career-high 178 innings for Bakersfield in the California League in ’64, he went 11-11 with a 3.64 ERA. On June 15, he pitched a gem against Reno, allowing two hits after the second inning and striking out seven in a complete-game six-hitter, winning 2-1.


Thoenen’s 1965 season was split between Chattanooga in the Southern League and Eugene of the Northwest League. After six starts with the Class AA Lookouts, in which he went 0-2 with a 3.44 ERA, he was sent to Class A Eugene. He finished the season with a combined 9-10 record and 3.90 ERA.


In 1966, he opened the season with Macon, making one start — the last of his career — before moving to the bullpen for good. On June 12, he came on in the fourth against the Columbus and held the Yankees to to one hit, allowing the Peaches to mount a comeback in a 7-4 win. He appeared in 40 games that year, split between Macon, like Chattanooga a Class AA team, and San Diego, his first experience at Class AAA. That October, Thoenen was among several Phillies farmhands who had their contracts acquired by the big club. An infielder from Spartanburg named Larry Bowa was among the moves reported in The Sporting News on Oct. 29, 1966. 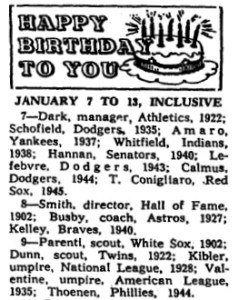 In January 1967, beginning what could be considered his finest year in the game, Thoenen was included in the weekly paper’s list of big league birthdays (as was former Notre Dame hurler Jim Hannan, then with the Senators). Based on the game accounts I could find, it appears that Thoenen was one of the top relievers on his team in ’67, often closing out games before the term “closer” had been used to refer to a relief pitcher.


After spending much of spring training with the Phillies, Thoenen was sent to minor league camp in April and started the season with their Class AAA affiliate in San Diego. He earned the save — before the statistic was tracked daily — on May 10 when he came on with the bases loaded and a one-run lead at Phoenix, inducing Ozzie Virgil to ground out, preserving an 8-7 Padres win. On July 24, Thoenen came into a game started by Larry Colton with the Padres trailing, 4-0, and pitched 7 1/3 scoreless innings, allowing three singles, as San Diego rallied for a 6-4 victory over Hawaii. Thoenen doubled in what proved to be the winning run and scored twice.


In an Aug. 7 column in the Arizona Republic, Bob Eger speculated that the Padres — who had led the Pacific Coast League’s Eastern Division for “most of the season” — might not be able to hold their lead, which stood at just 1 1/2 games over Indianapolis and Oklahoma City on that date:

Diamond Jim Gentile, who’s hammered out 19 home runs, will be lost to San Diego for at least two weeks due to a leg injury.

Most insiders figure he’s through for the season.

Two key pitchers, starter Larry Loughlin and reliever Dick Thoenen, will be missing for two weeks due to military obligations.

During that time the Padres will be knocking heads with their chief contenders including nine games in one six-day stretch.

On Aug. 22, San Diego — which would lead the Pacific Coast League with 134 home runs — hit five in a 9-7 win over Tulsa. Thoenen came on with one out in the first (starter John Tsitouris was charged with six unearned runs) and earned the win with 5 2/3 innings of three-hit, one-run ball, fanning five. He also joined the hit parade with a solo shot in the sixth that briefly gave the Padres a 7-6 lead before the Oilers tied it again.


The Padres not only held on to win the PCL’s Eastern Division, they expanded their lead to finish 8 1/2 games ahead of Indianapolis, earning the right to face Western Division winner Spokane for the circuit’s title. Thoenen, who was 6-2 with a 1.67 ERA in 35 relief appearances for San Diego that season, earned the win in the first game. He pitched two perfect innings on Sept. 6 to close out the contest and benefited from San Diego’s eight-run eighth — in which he contributed a single and a run. The Padres won the best-of-7 set in six games, taking the decisive game, 5-3, on Sept. 12 after opening a five-run lead. Thoenen was on the mound for the final out, coming on in the eighth with no outs and three runs already in. He got the last six outs, allowing nothing more than two hits. 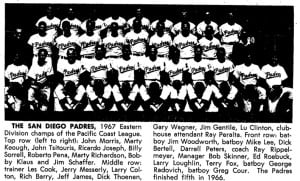 His minor league season complete, Thoenen earned a promotion to Philadelphia. His San Diego teammate Colton and Bowa, who played that year in Reading, also got the call, but neither would appear in a game. On Sept. 16, four days after closing out the Padres’ championship, Thoenen was in the bullpen at Connie Mack Stadium. Despite beautiful weather for a ballgame — upper 60s/low 70s, with a strong breeze — just 5,549 fans were on hand to watch the fifth-place Phillies face the eighth-place Dodgers. A 21-year-old Rick Wise, in his third season, started for Philly but was pulled in the third inning for a pinch-hitter after allowing three runs on six hits. When the home team took the field for the top of the fourth, Thoenen went out to the mound to warm up, No. 43 on his red pinstriped jersey.


Dodgers third baseman Bob Bailey, batting seventh in the lineup, led off with a double to left field. Second baseman Luis Alcaraz followed with a single to left that scored Bailey, giving Thoenen a career ERA, at that moment, of infinity. Pitcher Don Sutton came to the plate to sacrifice, bunting it back to Thoenen, who got the out at first, allowing Alcaraz to move to second. Los Angeles’ leadoff hitter, Nate Oliver, came up next and lined out to left fielder Tony Gonzalez. Thoenen then retired Dodgers first baseman Wes Parker on a comebacker to get out of the inning.

The Phillies’ 3-4-5 hitters went down in order in the bottom of the fourth, and though Thoenen had often pitched multiple innings in relief for San Diego, Philadelphia manager Gene Mauch sent Grant Jackson out to the mound to pitch the fifth. There was no way of knowing it at the time, but Thoenen’s Major League career was complete: one inning, five batters faced, two hits, one run, no walks, no strikeouts, two assists. “It was somewhat of a blur,” he wrote to me.


When the Phillies’ postseason shares were distributed after the season, Thoenen was one of 10 players who received one-fifth of a share — $39.43. A full share for the fifth-place Phils that year was $197.18. He spent that offseason pitching for Lara in the Venezuelan winter league, with Bobby Cox as one of his teammates.


In 1968, after spending much of the spring with the Phillies, Thoenen was optioned back to San Diego to start the season. He closed out the Padres’ first win of the season when he struck out Indianapolis’ Frank Obregon with the bases loaded to preserve a 5-4 victory. Not long after that, Colton saw his only Major League action, pitching two innings, allowing one run, in a blowout loss at Cincinnati’s Crosley Field.


That year was San Diego’s 33rd and final campaign in the Pacific Coast League before the club joined the National League. Thoenen also had a role in the season finale, hitting a home run in an 8-7, 10-inning win, but the Padres finished second to the Tulsa Oilers. In 36 games, he went 1-3 with a 2.41 ERA, striking out 40 and walking 31 in 71 innings.


(I also thought it was worth mentioning this gem that came up in my research: Roughly midway through the season, on July 28, 1968, Colton allowed a home run to Tucson’s Jim Dunegan on a 3-2 pitch to lead off the game — and then held the Toros hitless the rest of the way in an 8-1 victory.)


With the Padres becoming a big-league team in 1969, the Phillies moved their top farm club to Eugene, Ore. Thoenen, in what would be his final professional season, was with the Emeralds, who ran away with the PCL’s Southern Division title — finishing 13 games ahead of the Phoenix Giants. He appeared in just 12 games, throwing 22 innings with a 4.09 ERA, but his contributions were enough to earn him a spot in the team photo (which of course could have been taken at a time when he was with the team; I was unable to determine why he pitched so few innings). The Emeralds also featured a 23-year-old Bowa in his final minor league season. 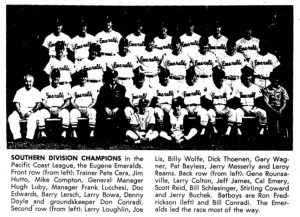 After retiring from baseball, Thoenen began his second career (“Sales” is all he wrote in response to my question about his post-playing life) and, I can only assume, liked the Beaver State enough to settle there. He’s now one of 104 pitchers whose career lasted exactly one inning in one game. Colton is one of 88 whose one-game career lasted two frames. After hanging up his spikes, he taught in the Portland school system and then became a writer and founded the Community of Writers. 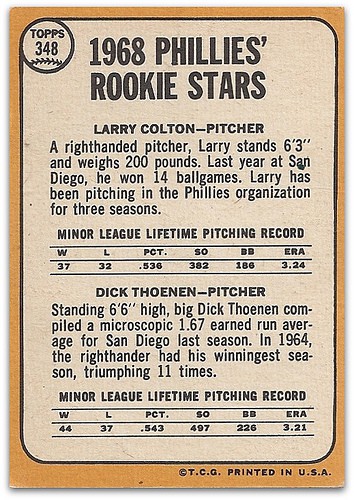 Thoenen’s responses to my questions were short — he wrote only in the spaces I left between questions, not on the back or on another sheet of paper — and, in one case, difficult to read. I’m not complaining; he didn’t have to respond to me at all. But the one answer I couldn’t make out was to the last question I asked him: if he had any thoughts when he looked at his rookie card now, 43 years — his uniform number — after it appeared. I couldn’t quite make out what he wrote, but he signed the sheet as well. Looking at it now, it appears it could say, “What a kid.”