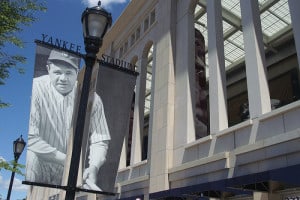 The Babe has a presence

I finally made it out to Yankee Stadium ’09 yesterday. It was a gorgeous, mid-70s afternoon and I didn’t even need a seat in the shade to feel comfortable, but I had one, and I was.

After emerging from the D train, I walked around Babe Ruth Plaza to pick up my tickets near Gate 4 and took a glance over at the construction site that was once Yankee Stadia ’23 and ’76. It’s nothing more than a dirt field, with the bat still standing behind what used to be the home plate area. I never had a particular affinity for the place — my memories were of games in my childhood in the ’80s, not of seeing great ballplayers — but it was still a bit of a shock, as everyone says, to see it gone. It’s definitely a good thing, though, that they’re finally moving on with construction of the park.

Inside about an hour before first pitch, I took the time to walk the whole way around the concourse, a needed improvement from the last place. No longer do you feel like you’re walking through the subterranian tunnels of some Cold War weapons base. Instead, the wider walkways — though not quite as wide as Citi Field’s, it seemed — and high ceilings made for a much more comforting experience.

Out behind center field harkens back to the old stadium, though, as you pass through a tunnel beneath the bleachers and behind the casino sports bar. A set of oversized retired numbers line the wall by the doors to Monument Park (closed by the time I got there, after batting practice), one of three places where the numbers are displayed (Monument Park itself is another, and a third display — visible on TV — is behind the bleacher seating in left-center). Then the narrow corridor continues past the sports bar entrance and emerges in left field.

I bought some lunch and intended to eat it while standing at a ledge behind the nearest seating section, but then I noticed numbers on the ledge and an usher came to usher away two people to my left. That’s when I realized you actually need a ticket to stand (or sit, because there are high chairs along the shelf) in any of these spots. I suppose they sell those tickets as reserved standing room, rather than general admission. I much prefer the traditional way — the ledges are there for anyone to use as a convenience. There are just some times I’d prefer to buy my food and drink and consume it at the nearest possible spot rather than trudging back to my seat and risk spilling anything.

After taking in the first four innings or so from my seat, I spent a couple of frames exploring. I checked out the museum, with an impressive display of New York baseball history (even if it’s there as much to assert the Yankees’ dominance as much as to remember the Giants and Dodgers and acknowledge the Mets), and chuckled at so many instances of Other Teams’ artifacts: jerseys and hats from the Dodgers, Giants and, yes, the Mets. Citi Field may have a Rotunda built to honor Jackie Robinson, but Yankee Stadium ’09 has Jackie’s hat, jersey and bat, plus jerseys from Mel Ott, Carl Hubbell, Pee Wee Reese and Mike Piazza. We won’t be seeing a Derek Jeter jersey in the Mets’ museum any time soon, and I’m fine with that. 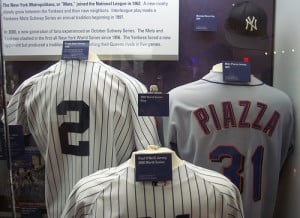 The collection of autographed baseball is impressive, too, and I took special note of 15 of them, finding all randomly, except for Mike Pagliarulo’s, which I looked up to get a shot for a friend of mine who loved Pags when he manned third base at the old place. It was cool to look at Thurman Munson’s locker, too, which I had only glanced the one time I was in the Yankee clubhouse for a story and didn’t have time to really look at it as I was keeping an eye out for Jeter, Jorge Posada, Sterling Hitchcock and Lee Mazzilli for the story I was working on. And next to Munson’s locker is a replica of a current stall, with a touchscreen that allows fans to put their own names on the LED board above their heads and take pictures. One proud Mets fan with more guts and guile than I put “Let’s Go Mets” on the sign and revelled in all of us taking his picture.

On the way back to my seat, I paused to look at all the overpriced baseball cards at one kiosk, including an uncut sheet of 1984 Topps for $100. Curious, I went on to eBay to see if any were available. One with a Don Mattingly rookie card (the attendant at the kiosk didn’t say if either of the two sheets for sale had any particular players on them) could be had for $149, but another auction was only up to $4 or $5 with a few bids in.

I was back in my seat to see CC Sabathia struggle in the eighth, allowing Seattle to tie the score at 2. The guy next to me who had downed three Pepsis (that I had seen) by the bottom of the second had returned with another (no telling how many he had when I was gone) and expressed his displeasure at CC’s inability to get outs and Joe Girardi’s refusal to bring in Joba. It worked out OK in the end, though, because Alex Rodriguez hit his 595th home run — a Yankee Stadium shot to be sure, landing in the first row in right field — to give the Yankees a 4-2 lead that was protected in the ninth by Mariano Rivera.

In the end, I find the new place to be bright and welcoming, but no more intimate than the old place. It’s still a colossus, certainly more stadium than ballpark, but it’s a needed upgrade from the one it replaced. Even though the concourses are bigger and open to the field, it still felt in some places like we were inside, beneath the stand, rather than outside or under cover of the stands. That may be a feeling derived from the open space above our heads, sloped up and outward for the seating sections.

But it certainly isn’t a bad place to see a ballgame — if you can afford it.