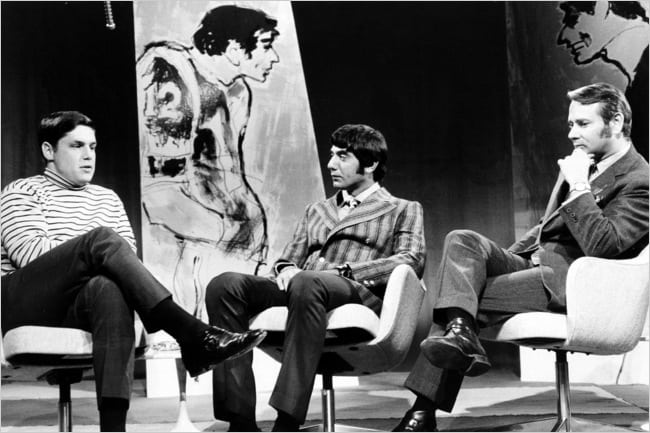 The Jets’ run may be over, but there is a fabulous George Vecsey column from yesterday that is worth a look. (It was one of those times where I had opened the story in a tab to read it, but then the day got away from me and there it sat, until this morning.) It was written to note how the Jets’ 1969 Super Bowl win sparked a run of three championships for New York City in 1969-70, with the Mets and Knicks to follow, plus it has that awesome AP photo above showing Tom Seaver and Dick Schaap on Joe Namath’s TV show.

But it’s as much about the Mets as it is the Jets and it includes this disheartening passage:

The more I think about it, no miracle could resuscitate the current Mets.

This franchise has exhausted all the good karma from Casey Stengel, Marvelous Marv Throneberry, the sainted Hodges, the mix-and-match tourists of 1969, Mookie’s mad moment in 1986. There is no Seaver among this bunch, and no Payson, either.

And who can argue? There’s only one Stengel, but the closest to him might’ve been Yogi Berra. The late-century/new-century equivalent might be Bobby Valentine.

Throneberry, though not an Original Met (he came to New York from Baltimore in May 1962), is akin to Jeff Conine being Mr. Marlin — a member of the expansion team who will always be associated with it despite not necessarily putting up impressive numbers.

There are no characters to lighten the mood among the Mets’ reserves (Jose Reyes is too good, and a starter).

A Hodges equivalent? Maybe Joe Torre, but he’s on his last managerial job, and he’s already had his run in Queens.

The Mookie moment? It could’ve been Endy Chavez’s catch in the 2006 NLCS, but the team couldn’t capitalize on it.

Johan Santana, as good as he is, can’t compare to Seaver. The Mets are still looking for their first homegrown ace since … Doc Gooden!? (And Mark Sanchez can’t match up to Seaver for the Jets, because unlike Seaver, he didn’t turn around the fortunes of the franchise. That was more Rex Ryan’s touch.)

And no one’s ever going to think back upon the Wilpons’ tenure as owners with fond memories, now are they?

The one thing the Mets may have is the mix-and-match thing going. Sadly, it’s more of the ragtag variety than any semblance of a team. Not unlike the mid-2000s Yankees, the Mets are going out and getting players, but they’re not building a team. The Mariners improved by 24 wins in 2009 (from 61 to 85) while the Mets regressed by 19 (89 to 70) because they adopted a new philosophy and stuck to it. Omar Minaya’s been preaching a team built on pitching since he got the job, but we’ve yet to see him stick to that plan with any consistency. He certainly made an effort last winter, but injuries undermined him. This offseason, it’s as if that plan has been scrapped.

« Everybody’s doing it, so no one gets jinxed
Project Rundown: The Bucs’ sartorial switch »