Some quick hits, because I suck at consistency and I’ll be away for a few days:

This is what you get when Darryl Strawberry* is making your picks at the draft: You end up with Guillaume Leduc, a pitcher out of Montreal, who should be rushed to the Majors this season so that he — Leduc — can relieve El Duque and pitch to Paul Lo Duca. But maybe he’ll pitch at Brooklyn this summer and take a toss from Lucas Duda while covering first base.

*OK, I know, he’s not really making the picks, but still.

But then there’s the Yankees. They strengthened their frontcourt with their first pick — a 6-foot-10 hurler with elbow issues, Andrew Brackman out of North Carolina State. I guess with so many pitching injuries this season, they thought that was how pitchers are supposed to look.

Later, they took a hurler out of the Savannah (Ga.) College of Art and Design. Seriously. He comes with upside, though: He’s really good at painting the corners and should be able to help decorate the new clubhouses at the new Yankee Stadium. I just hope his first words at orientation in Tampa aren’t, “These uniforms are so 1920s.” 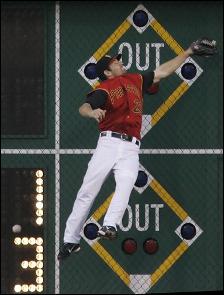 I have to side with those who find the Pirates’ Friday-night red-based ensemble a bit hideous. At first, I thought the jerseys looked sharp, but that was with Adam LaRoche in jeans. (Nice artistic reference by Uniwatch when it was announced.) Now, I do find them over the top, mainly because with the black undershirt, red sleeveless jersey and white pants, it’s too much. It’s like a flag, an XFL uniform or, even worse, one of those hideous “futuristic” designs teams wore several years ago.

The Pirates used to have red in their uniforms — but then again, they also once had pockets. I’m pretty sure that design’s not coming back anytime soon.

OK, this isn’t good. The Mets are on a four-game losing streak — the first time all season they’ve lost more than two straight — and they now enter a stretch of six straight series against six different playoff teams from 2006. They’ll become the first team in baseball history to do that against six different teams. (Two teams previously have played six straight series against playoff clubs, but some of those have included repeat teams.) And because they play the Padres by virtue of being in the National League, the Mets will become the first team in baseball to play the seven other postseason participants from the previous year. Good luck to the team that, some year, has to face all eight of the previous season’s playoff clubs.

In other scheduling quirkiness this weekend, the Astros will become the first team to play both Chicago teams on the same trip to the city when they spend the weekend at Comiskey Park and head to the North Side on Monday. And the Pirates return to the Bronx 80 years after their 1927 World Series showdown.

It turns out that the winningest pitcher in the illustrious nine-plus-year history of the Tampa Bay Devil Rays is none other than Victor Zambrano. Scott Kazmir is nine back, which means — with that team — he could pass Zambrano in April 2008. But Zambrano’s stature prompted one coworker to remark, “There are some relievers with 35 wins. Scot Shields gets like six a year.”

As of today, Shields indeed has 35 career wins. Funny how that works. (It’s not as fun when you break down their stats and see that Shields got some of those as a starter, but Zambrano got some of his as a reliever.)

Missed this the other day, but David Wright cashed in on Coca-Cola’s buyout of Vitamin Water’s parent company.

That’s almost as sweet a deal as the owners of the Spirits of St. Louis negotiated with the NBA.