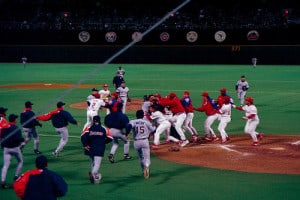 Brawl at the plate

It was a Monday afternoon in May 1994 and I was a senior in high school. My dad was on the board of education in our town, so he knew the administration well, so when the principal of my elementary school called to say he had extra tickets for the Phillies game that night, Dad and I jumped at the chance, even though it was, for both of us, a “school night.”

The big draw wasn’t the defending National League champion Phillies or the visiting Padres, with future Hall of Famer Tony Gwynn (who actually struck out once during the game). It was the seat location. Through a friend, the principal had gotten seats six rows behind home plate at Veterans Stadium. I had never been so close to a Major League game, and I’m not sure I left my seat once.

The real excitement came in the fourth inning. Mariano Duncan came to bat for the first time after being hit by a pitch in the second and took ball one, which must’ve been high and tight. Duncan probably felt that he was being targeted, so he must’ve said something — either to the pitcher, Andy Ashby, or the catcher, Brad Ausmus — because Duncan and Ausmus then started shoving each other and the benches emptied.

It didn’t go much further than the shoving in the photo, but both Duncan and Ausmus were ejected. It was a lot of fun for a high school kid sitting six rows behind home plate.

For the longest time, that was my lasting memory of this game. Until this happened. Mr. Merce was the principal who invited Dad and me to the game and I always remembered him as a die-hard Reds fan, but clearly one who loved baseball in general. I went back to visit with him a couple of times in college and at least once after I’d graduated and was living at home, working for the local newspaper. My big regret, though — and isn’t there always one of these when a tragedy like this happens? — is that I didn’t get back for a visit after I’d started working in baseball. I’m sure he would’ve enjoyed that conversation.

« Give Murph a chance
Canseco’s new book on ‘The Simpsons’ »