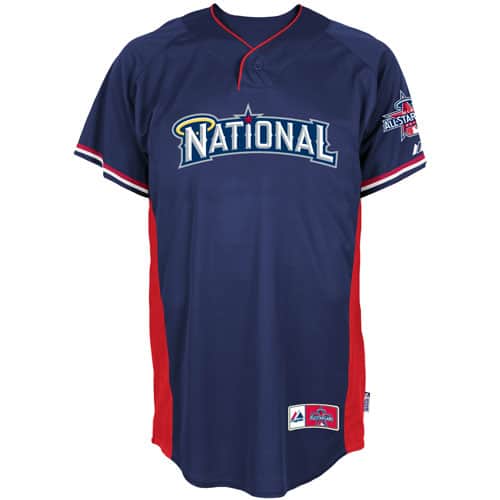 You can now get this jersey with David Wright’s name and number on the back after he overtook Placido Polanco for the starting job at third base. Everyone with a blog will be breaking down the selections, so here are some quick thoughts. There will be plenty of places to find more in-depth analysis.

Fan Elected Starters – NL
C – Yadier Molina. Eh. I guess. There aren’t any Mike Piazzas around anymore.
1B – Albert Pujols. Right on.
2B – Chase Utley (DL). Historically, after him, it’s pretty even in the NL, but he was having an off year. But the right man for this year (Prado) gets the start.
SS – Hanley Ramirez. Right on.
3B – David Wright. Right on.
OF – Ryan Braun, Andre Ethier, Jayson Heyward. No arguments here. It would’ve been cool to see Heyward — assuming he doesn’t play — as the second-youngest starter in All-Star history, after Frank Robinson.
Fan Elected Starters – AL
C – Joe Mauer. Right on.
1B – Justin Morneau. Right on.
2B – Robinson Cano. Right on.
SS – Derek Jeter. He doesn’t have any sexy Yankee records to claim this year (13 more stolen bases to pass Rickey Henderson is about it), but there was no one else in the AL.
3B – Evan Longoria. Right on.
DH – Vladimir Guerrero. Right on. Amazing turnaround.
OF – Josh Hamilton, Ichiro Suzuki, Carl Crawford. Yep, pretty good choices here.
Player Ballots – NL
C – Brian McCann. Have the players never heard of Miguel Olivo? He’s played with enough of them.
1B – Adrian Gonzalez. Good work.
2B – Martín Prado. Not a sexy name, but definitely one of the players deserving of the nod based on his play this year.
SS – Troy Tulowitzki (DL), replaced by Jose Reyes, who was second. Reyes has been as good at shortstop as anyone over the past month, as has Rafael Furcal. Could’ve gone either way, and you can’t really pin it on any New York hype, since Furcal plays in L.A.
3B – Scott Rolen. Great fountain of youth first half.
OF – Corey Hart, Matt Holliday, Marlon Byrd. Glad to see Byrd make it. Good halves by the other two as well.
SP – Ubaldo Jimenez, Roy Halladay, Josh Johnson, Tim Lincecum, Adam Wainwright. Only a slight beef. Let’s look at it this way:
Player A: 109.2 IP, 97 H, 46 BB, 121 SO, 8-4 W-L, 3.28 ERA, 1.30 WHIP, .237 BAA
Player B: 104.1 IP, 100 H, 35 BB, 66 SO, 10-2 W-L, 2.93 ERA, 1l29 WHIP, .262 BAA
Player A is Lincecum. Player B is Mike Pelfrey. It’s hard to argue against Lincecum and he has the edge with all the strikeouts, but we can’t expect the players to break down the numbers side-by-side like that. Still, Pelfrey deserved a spot, and he didn’t get it from Charlie Manuel.
RP – Matt Capps, Brian Wilson, Jonathan Broxton. The Nationals needed someone.
Player Ballots – AL
1B – Miguel Cabrera. Right on.
2B – Dustin Pedroia (DL), replaced by Ian Kinsler. That works.
SS – Elvis Andrus. Good pick.
3B – Adrian Beltre. Right on.
C – Victor Martinez (DL), John Buck. Happy for Buck.
DH – David Ortiz. Wasn’t his career over after April?
OF – Vernon Wells, Jose Bautista, Torii Hunter. Right on.
SP – David Price, Clay Buchholz, Phil Hughes, Cliff Lee, Jon Lester. Good picks. Look at the league respect for Hughes. Nice thing for him, having grown up near Angel Stadium.
RP – Mariano Rivera, Neftali Feliz, Jose Valverde. Excellent closers.
Manager’s selections – NL
1B – Ryan Howard. Gee, big surprise. Should’ve gone to Joey Votto, leaving Howard to the fan vote, but it wouldn’t be an All-Star team without suspecting a manager took one of his own guys over a more deserving candidate.
2B – Brandon Phillips (replacing Chase Utley). Only other one I could think of would be Dan Uggla.
OF – Michael Bourn, Chris Young. The two picks to fulfill team representation quotas.
IF/OF – Omar Infante. This is what “This Time It Counts” has done — forced managers who want to win to take flexible utility guys. Thanks, Bud. Horrible All-Star.
P – Chris Carpenter, Yovani Gallardo, Tim Hudson, Evan Meek, Arthur Rhodes. I can understand Rhodes, who’s been brilliant. But Meek as the Pirates’ rep over Andrew McCutchen? I would’ve preferred the deserving McCutchen and someone like Heath Bell or Billy Wagner as the other reliever.
Manager’s selections – AL
Ty Wigginton. The Orioles need someone, and I do like Wigginton. Good for him.
Matt Thornton. The only White Sox player and a lefty reliever. OK.
Fausto Carmona. I suspected he’d be Cleveland’s rep. Who else would it be, now that Shin-Soo Choo is injured? Austin Kearns!? Ha!
Joakim Soria. Your Mark Redman Royals All-Star for 2010. But really, Soria’s not that bad a pick, but it would’ve been nice to see New Jersey’s own David DeJesus get the nod.
Trevor Cahill. Representing the A’s. Could’ve been anyone.
C.C. Sabathia. One of these two equals Manuel’s pick of Howard. Sabathia’s an interesting choice because he’s slated to pitch next Sunday, which would make him ineligible for the All-Star Game. And Andy Pettitte could very well replace him.
Alex Rodriguez. A good season, but not what we’ve expected from him. Still, not a terrible choice.
Final Vote – NL
Heath Bell (SD)
Carlos Gonzalez (COL)
Joey Votto (CIN)
Billy Wagner (ATL)
Ryan Zimmerman (WSH)
These are all fine Final Vote candidates. As I said, I’d swap Votto and Howard and put one of these relievers on the team instead of Meek to give McCutchen a spot. At least they didn’t put Stephen Strasburg on here. Tough to tell who will win this one.
Final Vote – AL
Paul Konerko
Nick Swisher
Delmon Young
Michael Young
Kevin Youkilis
Good choices here too, but does anyone think this won’t become a face-off between Swish and Youk? Maybe those White Sox or Twins fans will surprise us though.
« The Mets jersey in Yankee Stadium
I want the real All-Star Game back »