This is the sixth in a series. Previous posts are:

In the spring of 2001, Lakewood will join six other New Jersey towns and cities on the minor league baseball map. Many people along the Shore are already excited about the team coming to Lakewood, but it comes at the expense of fans in the Sandhills region of southeastern North Carolina.

As excited as New Jersey fans will be to welcome the franchise to Lakewood, that’s how sad the fans down Interstate 95 will feel when they say goodbye to their Cape Fear Crocs.

The Class A Crocs will finish this South Atlantic League season and the next in 11–year–old J.P. Riddle Stadium in Fayetteville, N.C., a city of 75,000 that lies halfway between New York and Miami on I–95. Then the organization will leave, re-emerging at the start of the 2001 season in Lakewood, with a new nickname.

After a two–game visit to Riddle Stadium, I can see why Crocs owner Greg Padgett decided to sell his team to the American Baseball Co., the same group that owns the Class AA Eastern League Trenton Thunder and Reading Phillies. It’s a small stadium with metal stands, seats and bleachers. There is no covering over the seats, no concourse, no concession or souvenir stands other than separate, free–standing sheds behind the stands. The six–person Crocs staff has a trailer set up at the end of one building to use as its office. 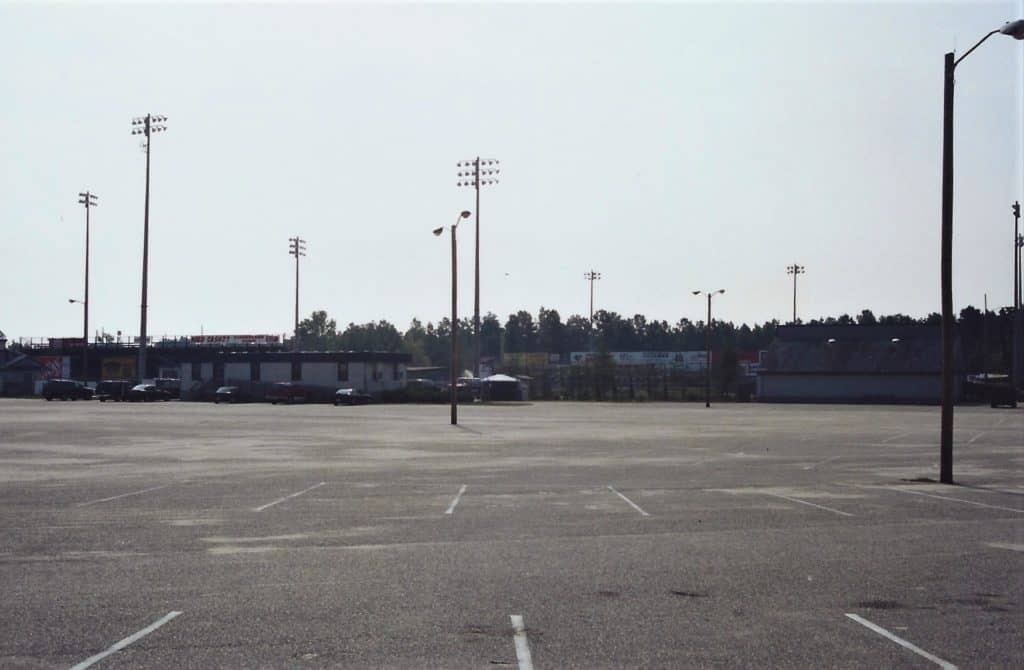 The scoreboard has no video screen and lists only the bare essentials – line score, pitch count and batter’s uniform number.

It’s minor league baseball like it used to be, really. Just like in “Bull Durham,” only without the big bull beyond the outfield wall. But not even that landmark stadium could avoid the progress of the wrecking ball, and now the Class AAA Bulls – in a higher classification – play in a new park. 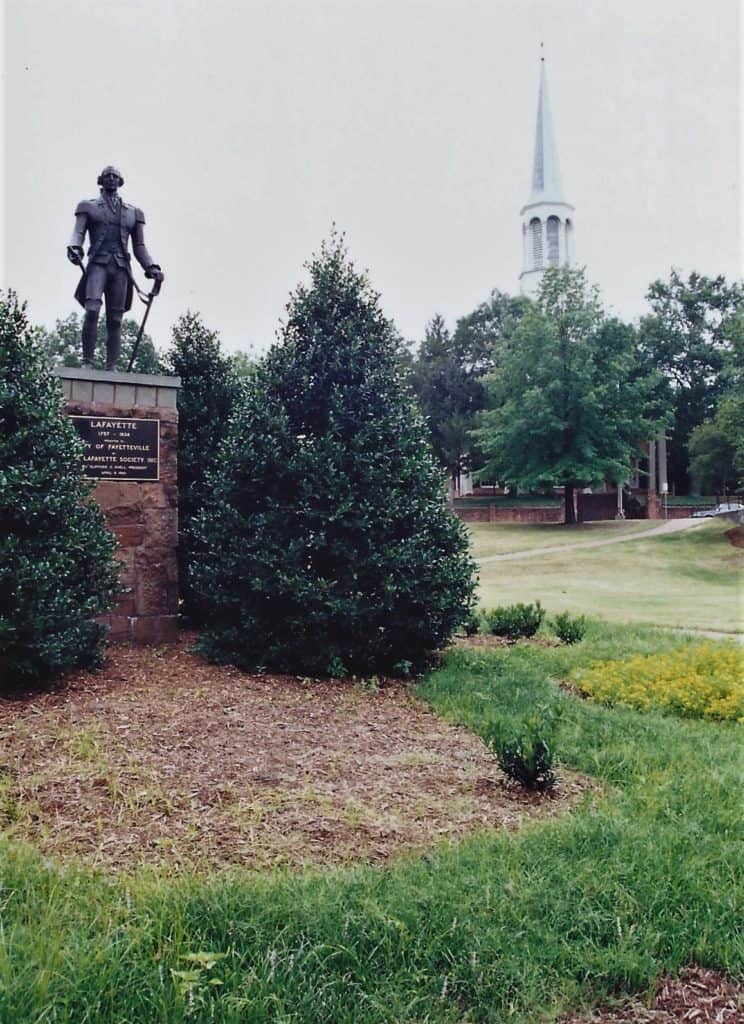 The journey to Carolina’s Cape Fear region covers a little more than 500 miles and takes nine to 10 hours, depending on speed and stops. I spent the entire trip down with Bruce Springsteen – someone who knows about small communities hitting hard times – in the tape deck. I later checked how far his entire roster of albums would take you – easily from here to Miami, with 19 hours of Boss music from the start of “Greetings from Asbury Park” to the end of “Tracks.”

City on the rebound

I toured Fayetteville on Tuesday before that night’s game with the Delmarva Shorebirds. It’s an old city, established in 1783 and one of many U.S. cities named for the Revolutionary War hero the Marquis de Lafayette. Before establishing Raleigh as the state capital, the North Carolina Legislature met in Fayetteville, and it was there in 1789 that it ratified the U.S. Constitution and chartered the University of North Carolina, the oldest state university in America.

Dozens of miles from the ocean, Fayetteville is North Carolina’s most inland port, thanks to the Cape Fear River that lends its name to businesses all over the state’s southeastern corner. The actual Cape Fear lies about 80 miles south, which would make a long ride for Robert DeNiro holding onto the bottom of a car. 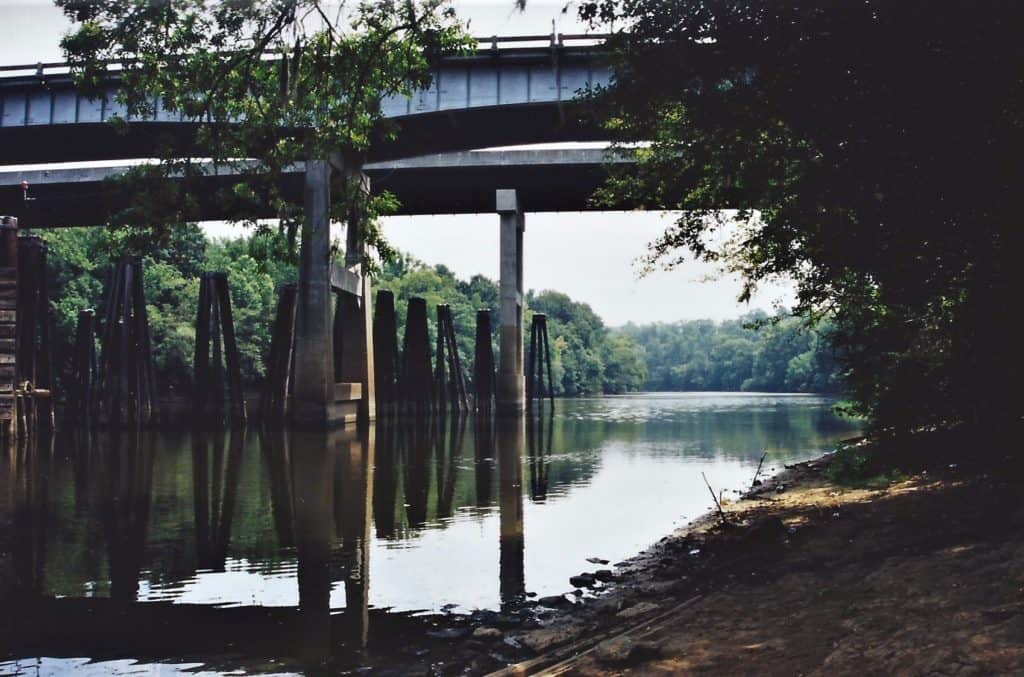 Eight historic churches are scattered about town, along with other significant buildings and landmarks. The Old Market House now occupies the site of the old State House, where the Legislature ratified the Constitution and founded UNC. The Market House is a national landmark, centered in a traffic circle at the intersection of four downtown streets. It’s a bittersweet picture with such an elegant building sitting among abandoned storefronts.

Leading west from the Market House is Hay Street, a cobblestone, tree–lined avenue with storefronts along either side. It’s the type of street that should be blocked off on weekends with hordes of people shopping, eating, sightseeing, but there are only a few stores to attract any crowd; one of every three buildings is occupied, with the others whitewashed and boarded.

But Fayetteville is making a comeback. I had watched a city–produced tourism pitch on television and recognized many of the projects under way or about to start. Storefronts and entire buildings are under renovation. The only problem is the city may not have baseball to help with the rebound, the way Trenton and Newark are pulling themselves up with the help of America’s pastime.

If baseball does not return to Fayetteville for some time after the Crocs leave, it won’t be because of a lack of effort by team management.

General manager Brad Taylor and the director of media and military special events, Buck Rogers, know they need to make a push for baseball in the region. Every home date left on the 1999 Crocs schedule has some promotion attached to it, and there’s certainly going to be a lot planned for next season.

But despite their efforts, the Crocs rank last in Sally League attendance. Through 52 home dates, Cape Fear was averaging 1,202 fans with a total of 62,523. The Shorebirds, an Orioles affiliate playing in Salisbury, Md., led the league with 236,068, an average of 4,216 for their 56 home dates.

“We have 55,000 people stationed at Ft. Bragg,” Rogers said. “Every Monday home game is Military Monday, where anyone with any kind of military ID gets in free. But we had only 620 people here last (Monday).” 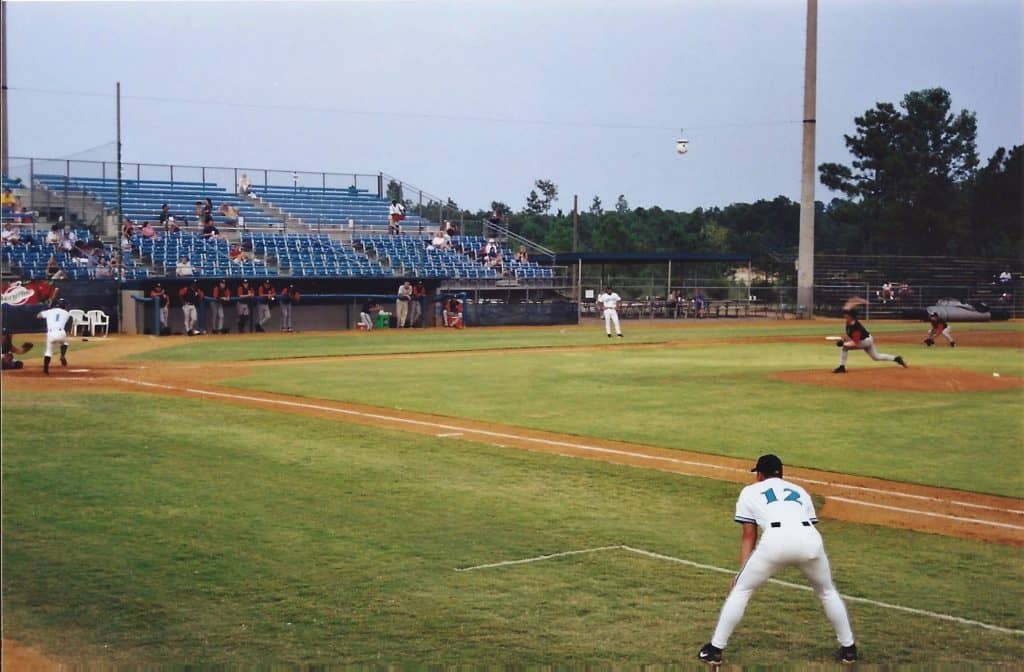 That’s about all the Crocs got for each of the three games on last week’s homestand – 620 to 670 people per game. After winning Monday’s game 7–3, Cape Fear dropped the second game 6–1 to fall into a three–way tie atop the standings with Delmarva and the Hagerstown (Md.) Suns. The Shorebirds won Wednesday’s game 8–3, sending the Crocs to third place.

It seems that the record on the field has nothing to do with it.

“The bottom line is, a facility will make or break baseball in Fayetteville,” Rogers said. “No team will even remotely consider coming here without ground being broken and ongoing construction.”

A little more than a mile up the road, back toward the city, the new $55 million Crown Coliseum draws 3,000 for Fayetteville Force ice hockey games, and sells out the 10,000–seat arena for professional wrestling.

“Around here, if it’s not NASCAR or All–Star wrestling, they don’t care,” Rogers said.

So next summer, while we watch the progress on Lakewood’s 6,500–seat park, baseball fans in Cape Fear will be counting the days until J.P. Riddle Stadium finally falls silent for good. Just don’t call the Crocs lame.

“People are saying we’re going to be a lame–duck team next year,” Taylor said. “It’s only lame duck if you make it that. If the fans make it, if the community makes it, if we as a staff let it. But if we don’t give a push at the end and show people that we want baseball here, it could be 10 years before anyone looks at this region again.”

« Do you have the Power?
Phoenix in the offseason »