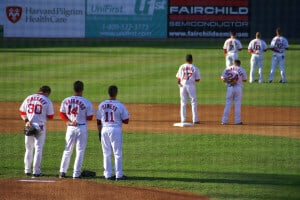 It’s the image of hundreds of photographs, film clips and memories — the golden light and long shadows of dusk in New England. The grass seems a little higher, the hay bales shimmer in the glow and the scent of pine, wisteria, lupine or any number of fragrant foliage wafts on the breeze. And so it seemed appropriate that my first visit to Portland’s Hadlock Field was for a night game at the end of May that began at 6:05 p.m. Nevermind the fact that the start time is almost certainly a measure designed to prevent fans and players alike from freezing in the Maine night at this early point in the season.

My attachment and attraction to Maine goes back to my childhood and our regular summer visits to see my uncle along the midcoast. When my interest in baseball took off in 1986 and I started collecting baseball cards, I noticed a line on the back of some rookies’ cards commemorating their season playing for “Maine.” From 1984-88, there was a Triple-A team in Old Orchard Beach called the Maine Guides, and though I never convinced my parents to take me to a game there, I always noted its location on maps and exit signs as we drove up the Maine Turnpike. After four seasons as the Indians’ top affiliate, the Phillies entered a two-year agreement with the Maine franchise, but from the start it was understood that the team would remain in Old Orchard Beach for only the first year; in 1989, the team moved to Moosic, Pa. — in between Scranton and Wilkes-Barre — to the new Lackawanna County Stadium and became the Scranton/Wilkes-Barre Red Barons. 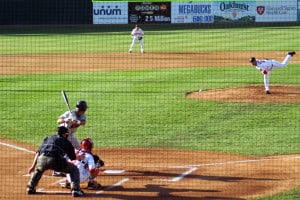 Professional baseball returned to Maine six years later, when the Sea Dogs entered the Eastern League in 1994. Portland was awarded the team in 1992 as an expansion franchise brought on by the addition of the Colorado Rockies and Florida Marlins to the National League. Portland and Florida entered into a player development contract that lasted until 2003, when the Red Sox teamed up with Portland in one of the most significant affiliation shuffles in recent memory. Hadlock Field was built for the Sea Dogs and two city high schools, the Portland High Bulldogs and the Deering High Rams, and named after a longtime high school coach.

My desire to see a game in Portland was first sparked during a conversation I had with Derrick Lankford when I was covering the Lakewood BlueClaws in 2001. He had been released by the Pirates, where he was in Double-A with the Altoona Curve, and signed by the Phillies, who dropped him two levels to high Class A. Born in 1974, he’s two years older than I am and, at the time, was considerably older — in baseball terms — than his teammates. I think he had some sense of the impending end to his career and that may have made him a little more reflective. I joined him for a Saturday lunch at a local restaurant with a group of children, and he told me that Portland was his favorite minor league city to visit. He talked about the small-town aspect to Maine’s largest city and the attraction of the harbor district, the stretch of piers featuring shops, bars and seafood along Commercial St. I first imagined Hadlock Field nestled in among the wharfs, a view of the sea and ocean breezes blowing in on hot summer nights. Soon I learned that Hadlock is inland, up the hill and adjacent to I-295, but that didn’t dampen my longing to see my first ballgame in Maine.

When my wife, Casey, and I planned our weeklong vacation in Maine and Massachusetts, we did it because of a wedding in Amherst on the last weekend of May. The fact that the Sea Dogs were home — and playing the Binghamton Mets — during the block of days we had planned to be in Portland was a bonus. The crowd was more Boston than Maine, which is to say I felt more like I was at Fenway than among Maineiacs. That’s to be expected, I suppose, with the Red Sox affiliation and the team’s location further south than most of my Maine adventures — not to mention part of the state’s largest city. It was a festive atmosphere with a spirited crowd. Two women next to us cheered enthusiastically for Zack Daeges and the fans erupted into cheers with every extra-base hit and every run scored by the Sea Dogs. And it wasn’t a scattered cheer around the stadium offset by empty swaths of seats; it was an encompassing wall of sound rising at once from every corner of the ballpark. 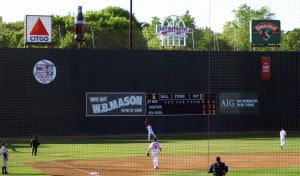 The best part of Hadlock Field is the local touches. The most noticeable is the Maine Monster, the left-field wall built to replicate Fenway Park’s Green Monster — right down to the Citgo sign and Coke bottle advertising touches atop it. There’s also an inflatable L.L. Bean boot above the Sea Dogs’ bullpen in right-center field. Beneath the stands, seafood at the concession stands and a beer counter featuring local brews made for good eating and drinking at the game.

Despite the B-Mets’ presence as the visiting team, I didn’t pay too much attention to the game from a journalistic or prospect-watching standpoint. Eric Brown, who I saw in Brooklyn a few years ago (with shorter hair — on him, not me), was the starting pitcher and Mike Carp got the start at first base, but otherwise, there weren’t too many prospects who stood out. (Nick Evans was with the big-league Mets at the time.) We just sat back and took it in for what it was: A minor-league game played by mostly anonymous youngsters striving for a shot in The Show. 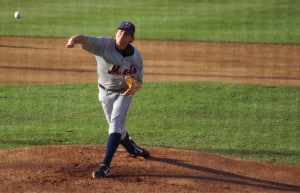 We ingested the local flavor, from the roller derby skaters watching from the steps of the adjacent gym to the region’s residents parading by us on the concourse. I took only 20 pictures worth posting because I didn’t leave my seat to explore the ballpark, as I would were I on my own (though particularly during weekday afternoon games, when a lot more seats are empty). But that didn’t make this visit any less enjoyable.

Weary from another long day, we walked out just before the ninth, after “Sweet Caroline” (which apparently has creeped its way up I-95 from Fenway to infiltrate Hadlock) but before the B-Mets went down in the final frame of a 3-1 Sea Dogs victory. It was just after 8 p.m. and there was still some light left in the sky. If not for the 50-degree nip in the air, it would’ve felt like the kind of New England dusk so often depicted in an Edward Hopper painting.