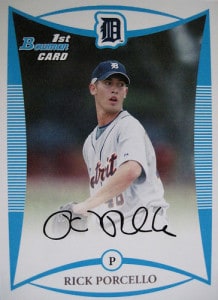 Way to go, Rick Porcello! The Jersey guy had a chance to pick up a little gift in exchange for a couple of digits, but he chose a different route instead.

Torii Hunter asked his new teammate for No. 48, which Hunter has worn his whole career (since 1997) and Porcello has donned throughout his career — which only goes back to 2009. In cases like these, the veteran usually gets his number — for a price. But Porcello, to his credit, didn’t want any money or a watch. He asked that Hunter donate the money to Hurricane Sandy recovery efforts.

Porcello joins a growing list of ballplayers and teams lending a hand, either by volunteering their time or making a donation, in the aftermath of the storm. This is by no means a comprehensive list, but here are a few of the more notable instances:

Foley’s NY — the self-described “best baseball bar in New York City” (and it’s hard to argue) — invited David Cone, Cecil Fielder and Joe McEwing in as guest bartenders last week and donated all proceeds (video). (Would have loved to have been there, but I was working.)

The Lakewood BlueClaws will be participating in “Restore the Shore” Fridays until Memorial Day and joined with representatives from the Phillies, Trenton Thunder and Philly affiliates Reading and Lehigh Valley for a community clean-up day on Monday. I wish I’d known about that one ahead of time to make plans to join them.

Major League Baseball and the Players Association donated $1 million to the Red Cross. The Yankees donated $500,000 to the Red Cross and will also donate 20 percent of proceeds from sales at nyyankeesfragrance.com (whatever that is) through November and December. Joe Girardi and CC Sabathia also greeted fans (video) who made donations at Yankee Stadium.

The Mets held a food drive that benefited Sandy victims and Johan Santana joined Jeff Wilpon on Coney Island to assist in the recovery (video).

And in a gesture that really struck home with me (having grown up just a few miles from Sea Bright), the Orioles collected supplies and had them driven directly to several Shore towns hit hardest: Toms River, Belmar, Sea Bright, Union Beach and Hazlet.

As I said, I easily may have missed some, so feel free to leave any additions in the comments.