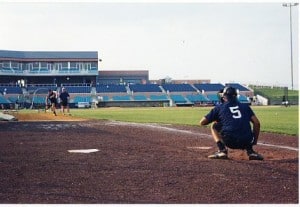 Warming up in the Atlantic City Surf bullpen.

This is the eighth in a series. Previous posts are:

The Surf is always up at the Sandcastle.

The name is a bit misleading, but nonetheless, a trip to The Sandcastle is like a night at the beach.

The home of the Atlantic City Surf sits between a highway and an airfield – not the boardwalk and the shoreline – and, well, it’s not actually made out of sand. But it is an attractive, nostalgia-inspiring place. There’s a certain Boys of Summer feeling about it.

Arrive early and walk around the outside of the park – the outfield corners provide a close view of each team’s bullpen as the players prepare for the game during batting practice. Most likely you’ll find a small gathering of children – more like a chain-link gang than a knothole gang – chasing each baseball that clears the fence.

The steps leading up to the main entrance are decorated on each side by baseball murals depicting Babe Ruth, Jackie Robinson, Honus Wagner, Ty Cobb and generic feel-good scenes of sandlot games and barnstorming teams.

Inside, the wide concourse makes for easy access to seats, via the Monopoly-named rows – from Baltic Avenue in left field to Mediterranean Avenue in right. The closer the seats to home plate, the more prestigious the names. The two lower sections behind home are Boardwalk and Park Place.

The 5,836 seats share the same color scheme as the Surf uniforms, a soothing complement of aqua and blue – the color we all would like the Atlantic Ocean to be along the Jersey Shore.

Like any minor league park – and increasingly the major league venues as well – the outfield is one panoramic billboard mosaic. Missing from the various advertisements, though, is Donald Trump’s collection of hotels and casinos. There’s no need, though – Trump Plaza and the Taj Mahal dominate the Atlantic City skyline that serves as the backdrop to the field.

Arriving close to two hours before the 7:05 p.m. game on Wednesday, I bought a $9 box seat that put me in the front row behind the Surf dugout on the third-base side.

From there, you have a great view of the game, plenty of leg room and a dugout roof that can be used as a footrest or a place to set your dinner. You also get a front-row center orchestra seat for the fifth-inning “YMCA” dance, featuring as many kids as can fit safely on the roof.

Such a close seat also allows for a close view of Surf catcher Hector Villanueva, the former Chicago Cub who could have been the origin of the term “backstop” to refer to a pitcher’s batterymate.

Atlantic City owner Frank Boulton is the founder of the independent Atlantic League, which will expand to eight teams next summer.

The Surf nickname works well so close to the ocean, but makes for some puns that get old fast. The public-address announcer begins the bottom of each inning with, “Ladies and gentlemen, Surrrrrrrrrrf’s up!” Each new pitcher was introduced with a different name for the mound – from sandhill to sand dune.

Before entering the game, instead of warming up in the bullpen, the relievers get loose in the Sandbox. OK, that one I kind of liked.

The Surf, in their second year at A.C., won the game, completing a three-game sweep of the Somerset Patriots. Former Met Chuck E. Carr homered and scored twice for the “Beach Boys,” (another one thought up by the P.A. guy) the 1998 Atlantic League champions.

Former major league all-star Ruben Sierra went 1-for-4 with a single, and Villanueva walked twice but never made it around to score. Kerry Taylor went 7 1/3 innings to improve to 2-2 on the season.

It was fireworks night after the game, so I put my feet up on the dugout as each light tower was shut down for the show. While the pyrotechnic display exploded beyond the scoreboard in left field and the patriotic music came through the speakers, I thought how nice it was for the Surf to end my eight-week summer odyssey at minor league ballparks with such flair.

Now I might have a chance to catch the Mets at Shea.

« Mets Dig Doug
The solution to all his problems »