I find it heartbreaking to travel to a major-league baseball city during the offseason. It’s a bit sad to be in a place where I could plan a game as part of the itinerary, if only the calendar would cooperate.

Casey and I spent five days in Scottsdale, Arizona, because her stepmom had a conference and her dad offered us a free stay at a timeshare in the city. Knowing five days in the desert would be welcome during the winter, we did not hesitate. (Next year’s conference is in San Antonio — a minor-league baseball city, with another an hour north in Austin.) So on Tuesday, our last day on vacation, we planned to get some pizza at Pizzeria Bianco, allegedly the best pizza in the West. (It’s hard to argue with that assessment, by the way. It was delicious — a thin crust, yet a puffy edge, and tasty, fresh ingredients. Even the olive oil was outstanding.)

Casey’s research told her that people actually start waiting outside Pizzeria Bianco at 4:30, half an hour before the restaurant opens for dinner. We arrived at 3:30, parking near the historic/museum district and just two blocks from Bank One Ballpark. The historic compound looked like a ghost town, and though the science museum was open, we barely had an hour and we didn’t want to pay a potentially exorbitant admission fee for such a short visit. So we walked over to the ballpark.

As we approached the gates outside left field, I remembered the TGI Friday’s inside. It might have been the giant Friday’s Front Row Grill sign over the doors. A few people were walking in, so we decided to have a beer. Once inside, we saw a multi-purpose arena instead of a ball field. 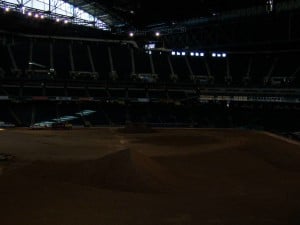 That pitcher’s mound is a little higher than regulation.

I’ve attended two games at the BOB, two of three against the Rockies during the Diamondbacks’ inaugural season in 1998. Knowing what Oregon State’s offense could do to Notre Dame’s defense, I never really planned a trip out to see the Insight Bowl last December. But considering all that the Mets have done this offseason, knowing that we’re less than a month away from the first pitchers and catchers reporting to camp, I was itching for just a glimpse of a baseball field, even if it was inside the dark dome of the BOB.

As we asked for our check, we chatted with the bartender while SportsCenter flashed images of Roger Clemens, who had just asked the Astros for $22 million to pitch in 2005 — though he hasn’t decided yet if he’s even going to do so. Our bartender encouraged us to walk out onto the patio, which I hadn’t realized was open, and told us to visit again during baseball season, when the restaurant is packed on gamedays.

We went through the door carrying the last few gulps of our 22-ounce beers, and the alcohol on my empty stomach combined with the vast, open space in front of me to seemingly lift me off the concrete steps. It’s odd being inside such a big stadium with nothing planned for that day, no one else walking around the stands, no workers getting the field ready. I looked out across the dirt — a motorcross event had just taken place that weekend, and monster trucks and a demolition derby were coming up, the bartender told us — and pictured the field there.

Then I wondered how many fans would fill the seats. The Diamondbacks’ moves this offseason have been strange. Troy Glaus will help, if he’s healthy. Hopefully, Luis Gonzalez will recover from his elbow surgery. But where will the team be without Steve Finley, Richie Sexson or Randy Johnson? Russ Ortiz isn’t even close.

When we turned around, I chuckled. 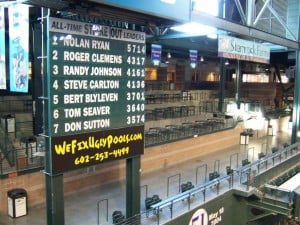 Does anyone expect that strikeout board to still be up on opening day? I can’t see any team continuing to keep a live count of the career strikeout totals for a pitcher who hated playing for the team in his backyard so much that he forced a trade out of town. I do, however, expect they’ll keep up the one below it. 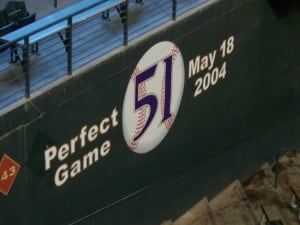 Even with a 36-year head start, the Mets still don’t have one of these.

As we took off from Sky Harbor Airport yesterday, we passed over Sun Devil Stadium at Arizona State, then what I guessed was Scottsdale Stadium, where the Giants play their spring games. Two months from now would be a perfect time to visit, with the Royals and Rangers in Surprise, the Cubs in Mesa. I have friends planning trips to Florida in March this year, and now three years removed from my spring training reporting trips to Clearwater I’m missing the 80-degree days and the exhibition games I attended in 2001 and 2002.

But the Giants have announced when individual game tickets will go on sale (more on that another time), and I check Mets.com almost daily to see if they’re going to get their act together and give us their corresponding date. I’ve never had baseball fever this bad before during the offseason.