That’s gold and Moss to you.

While perusing minor-league schedules for the upcoming season, I came across one of the team name changes that went unnoticed (at least by me) when it was announced last November: The former Charleston Alley Cats of the South Atlantic League have used the occasion of a new ownership group, a new stadium and a new affiliation with the Milwaukee Brewers to completely retool the team’s image.

Naturally, my first thought was, “Why Power?” The glut of team nicknames that do not end in the letter “S” has become a plague, I fear. Many of them represent a clever and purposeful connection to the local area or some history for the city or baseball in the region. When I first learned of this ability to name a group of people after a singular word was when I learned all the teams in the NBA and got to the Utah Jazz. How do you say it, I wondered, if you’re a player on the team? “I’m a Knick” or “I’m a Cub” are easy; “I’m a Jazz” just sounds like Ralph Wiggum. (Nevermind the Jazz’ idiotic decision not to rename the franchise when it moved from New Orleans.)

A quick look at the affiliated minor leagues gives us six awkward team names (excluding true plurals that do not end with an “S” like the Missoula Osprey and any variation of Sox; I’m not sure what to think of the West Tennessee Diamond Jaxx):

The above list potentially could have included several more; I know that one of the finalists when the Lakewood BlueClaws were named five years ago was Lightning, to go with the Thunder across the state in Trenton. So why Power? I was even more curious about what seemed to be a domed building as the centerpiece of the logo, which is exactly what I thought it might be: West Virginia’s capitol building. According to the team’s announcement, “West Virginia is and will continue to be recognized as one of the leading energy providers for the country. The energy production from coal, natural gas, and hydro-electric sources, combined with the fact that Charleston serves as the center for the state’s political and economic powers led us to the name of the team. We felt it was extremely important that the name reflect the entire region and are excited about the tremendous marketing opportunities that will go along with the name.”

Yet all I can think about is He-Man’s cry once he received the Power of Grayskull: “I HAVE THE POWER!!” They should put that on a shirt. 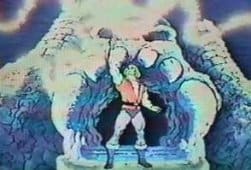 Personally, I think they should’ve taken a cue from teams like the Toronto Raptors, the Mighty Ducks of Anaheim or the Springfield Isotopes and christened the team with a nod to Hollywood: The West Viginia Alias, in honor of homegrown star Jennifer Garner.

But I understand that’s just being silly.

I wonder, too, if anyone made the connection between the team’s “custom” color of Moss and one of the state’s athletic heros, former Marshall star Randy Moss.

What I do like, however, is using the name of the state rather than the city. The SAL already has the Charleston River Dogs in South Carolina, so now there’s no need for the parenthetical designation of “WV” or “SC” in standings, box scores or game stories. But more interesting to me is that it is the first affiliated team to play in the Mountain State and use the state’s name rather than the city’s (or town’s). With a few dark years, minor league baseball has been played in West Virginia since 1887. The only other team to use “West Virginia” in its name — at least according to Baseball America‘s Encyclopedia of Minor League Baseball, 2nd Edition — is the West Virginia Coal Sox of the Frontier League. That team played 10 games in 1993 before folding.