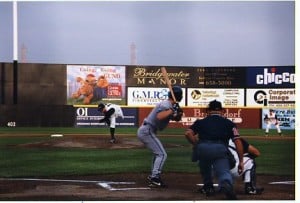 Behind the plate in Bridgewater.

Pitchers and catchers begin reporting to spring training on Feb. 16, 2005. That’s a little more than nine weeks from now. So starting today, with these 10 Fridays we have between now and then, I’ve decided to post some columns I wrote a few years ago when I was covering the minor leagues. I’ve wanted to include them in an electronic archive for posterity, and I figured the offseason was as good a time as any. Actual print dates are listed, but I take no responsibility for the headlines editors gave the columns. They appear as the titles to each entry.

Six years ago, New Jersey had no professional baseball teams. Now there are six in the Garden State, with another just over on Staten Island and one coming to Lakewood in 2001. Staff writer Dan [Lastname] will spend a night out at the ballpark each week this summer in search of the best baseball experience this side of Flushing or the Bronx.

Welcome to my dream.

It did not take much for my editors to convince me to take this assignment. In fact, they barely had to ask, and I eagerly accepted. By the end of August, I’ll have visited all six minor league teams in New Jersey, as well as the new Yankees affiliate on Staten Island and one other franchise yet to be determined. Eight weeks, eight parks, eight columns relating my experiences.

It begins with our newest diamond, Bridgewater’s Somerset Ballpark, home of the Somerset Patriots of the independent Atlantic League, a six-team organization with thre of the franchises in New Jersey. All last season and the first month of the 1999 campaign, the Patriots played all their games on the road – 125 straight – while the new brick-faced park was built in Bridgewater.

Certainly, it was a burden to the players to live in motels and ride buses everywhere, but for the fans it was worth the wait.

Getting to the park was no problem; my friend Dave got us the 41 miles from Little Silver (Exit 109) to the parking lot in 45 minutes on a Monday night for a game against the Atlantic City Surf (the third Atlantic League team in the state is the Newark Bears, who will open their stadium on July 16). There is also the convenience of New Jersey Transit’s Northeast Corridor line stopping just beyond the right field wall, if that interchange from the Parkway onto 287 just north of the Driscoll Bridge does not excite you as much as it does Dave and his BMW.

Without advance tickets I went to the window and asked for two of the best available seats.

“O.K.,” said the woman behind the glass, “how about Field Box? Behind home plate, front row?”

For $8.50 apiece, Dave and I found ourselves tugging at the protective screen behind the plate, telling each other how cool this was. Put me in the front row at the ballpark, and I regress into immaturity. After the Hillsborough Royals took the field with the Patriots for the National Anthem, sung by the Parsons School Chorus, we settled in for the first pitch from lefthander Justin Jensen. It was a fastball – behind the plate, you see everything. Throughout the game, Dave called out the pitches (“Oh, what a curve!”) while I kept score.

The front-row seats magnified the entire ballpark experience in the cozy stadium with seats down both foul lines and billboards lending color to the outfield wall. The continuous murmur from the crowd provided background for the sounds on the field – the pop of a fastball in the catcher’s mitt, the crack of the bat, the call of the umpire and the communication among the players. Even the labels on the bats were legible from Row 1.

The problem with sitting right behind the plate is those foul balls that hit the screen, which gives at least 12 inches. Lean forward in your seat at the wrong moment, and a ball could still bounce off your face. And watch those drinks you place on top of the wall – a ball high into the screen took ours out; luckily we’d drunk most of them. You don’t think of these things in the upper deck at Shea.

Independent baseball teams usually have a varied group of athletes on the roster. Some are former all-stars or world champions, others are rookies you’ve never heard of.

The most recognizable name on the Somerset roster is Bobby Bonds Jr., the son of the former Giant and brother of three-time MVP Barry. Junior Bonds is a lanky (6-4, 185 pounds) version of his brother with an identical stance, only from the right side of the plate.

The Surf brought with them Ruben Sierra, the former Texas Rangers superstar who could not seem to find as much success in Oakland, the Bronx, Detroit or the Mets farm system as he did in Arlington. When Sierra, batting cleanup, walked in the eighth and trotted down to first base, he became part of the perfect picture of independent league baseball.

Leading off first was Sierra, a former all-star and MVP runner-up who, at 6-1 and 200 pounds, still looks like a major leaguer. Covering the bag for Somerset was Brian Traxler, a 5-10, 240-pound bulldozer who would not look out of place playing in your local firemen’s beer-ball league.

Speaking of beer, this is where Somerset goes big-league. The drafts on tap cover all the Lites – Miller, Bud, Coors and so on – but at heavy prices, $3.50 and $4.25. Sodas are $2, but for $3 you get a cup to keep. The fries and hot dogs (which Dave called, “pretty good”) cost $3. Our favorite were the tri-colored nachos, $3.25 with just a little spice to the cheese. Or if you feel like pizza, flag down one of the Domino’s vendors in the stands.

Next week I’ll cross the Outerbridge Crossing to the College of Staten Island, home – for now – of the Class A Staten Island Yankees.