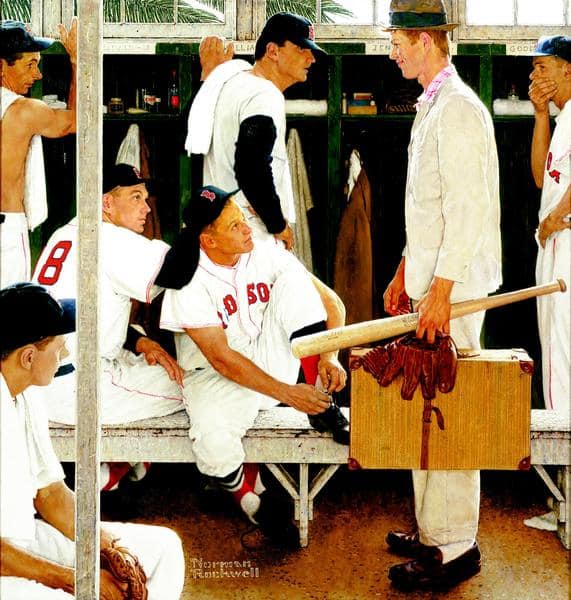 After reading this Larry Dierker column about former Red Sox pitcher Frank Sullivan, I came across this piece that recounts the day Sullivan and some teammates — but not all — sat for Norman Rockwell as models for his painting “The Rookie.” That’s Sullivan on the left of the image, the No. 8 visible on his back (he wore No. 18), his arm across the shoulders of outfielder Jackie Jensen.

I’ve long been a fan of Rockwell’s art, particularly all his baseball images, and that’s a cool story behind the making of “The Rookie.” It’s a bit like how they make some commercials these days, when it’s easier to put two star pitchmen together digitally than to arrange their schedules to be able to make the shoot at the same time. (I’m not sure if they were done this way, but I always think of the Jeter-Federer-Woods commercials — I don’t even remember the product — in which they all seem to be jovially joking with one another, but there’s a disconnect that makes me think that they were filmed separately and not together the same afternoon in some studio.)

That background on the painting also shed some light on one thing that never sat well with me: Ted Williams, standing at his locker behind the bench, looks more like Carl Yastrzemski, even though in 1956, Yaz was still in high school. Turns out that Williams acquiesced to his likeness being used, but didn’t sit for Rockwell. So it’s Sullivan who assumed the pose for Rockwell’s photographs.

Now I’m curious if any of the pics are in the book of Rockwell photos that came out last year. I’ll have to check that out.