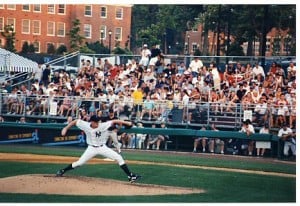 Second in a series.

The Pittsfield (Mass.) Mets were in town Tuesday, so the Staten Island Yankees billed it as the “Subway Series of Tomorrow.”

But how many of these players will actually make it to “The Show” and play against each other in a New York battle? Despite the lack of a subway that can get you from Staten Island to Pittsfield, Mass., I thought of it as the “Mini-Subway Series.”

It took 50 minutes to get to the College of Staten Island from Marlboro, where I went to pick up Uncle Paul – not really an uncle of mine, just one of those family friends you call “uncle” because that’s what your parents said. I owed it to him. He and Aunt Sandy took me to my first baseball game when I was 7 years old. It was Yankee Stadium in 1983, but I was more excited to see Reggie Jackson, who was with the California Angels then. Reggie was the only player I knew by name on either team. I still have a Yankee pennant from that day – yellowed from spending 16 years on the walls of my room – though I followed my parents’ influence and became a Mets fan.

The Staten Island Yankees, part of the Class A New York-Penn League that includes the New Jersey Cardinals, will play at the college through the 2000 season while their park is built out by the ferry terminal in St. George. It’s a nice campus, and the parking was free (maybe because we got there two hours before the 7 p.m. game). But for someone who has seen a lot of college baseball games, the setting was not that impressive.

The Yankees do a spectacular job with what they’ve got, though. A huge section of bleachers runs from the right-field foul line into right-center. They’ve also added grandstands past both first and third base to increase the seating capacity to more than 4,500. All the food stands and souvenir tents are lined up behind the first-base grandstand, along with a Port-o-John subdivision that serves as restrooms. It felt like walking along a carnival midway with Nat King Cole’s “Lazy, Hazy Days of Summer,” Sinatra’s “Strangers In The Night” – Paul’s favorite – and contemporary music for the kids coming through the speakers.

Our $8 tickets put us in the third base grandstand, right where the outfield grass meets the infield dirt. We had a perfect view of the field, and – take note – were in the shade of the trees as the sun set behind us. At 6 p.m., the outfield clock showed 101 degrees. And it was humid. By the time the game ended just before 10 p.m., it had cooled down to 89. Beware: It is a college stadium, and every seat is a metal bleacher bench. You get sore. Bring a seat cushion in case you do not catch a free one thrown into the stands.

On the field, the Staten Islanders truly look like Mini-Yankees (Mini-Michael Kaye impression here): “The Yankees are wearing their button-down white home uniforms with the blue pinstripes, the blue interlocking ‘NY’ on the chest and blue numbers – no names – on the back. Blue socks and blue caps, but no white interlocking ‘NY.’ Instead the lids have the Yankees’ famous bat and top hat logo, with ‘Staten Island’ written in the ribbon underneath.”

They even played “New York, New York” when the game was over.

Pittsfield wore black jerseys – somehow black is a traditional Mets color after little more than a season – and gray pants like the ones worn in Flushing in the 80s, with the blue-and-orange stripe down the legs. Also black caps with a “P” and blue bills.

With the Mini-Mets in town, the fans got into the New York rivalry. Throughout the game, the cheers were as loud for the visitors as they were for the home team. Maybe because the Mets provided all the excitement. Yankees starter Shad Whiteley struck out 11 in five innings, but gave up three runs. The Mets went on to win 6-0, but went down in order in the ninth when Marlboro’s Jason Faigin came on to pitch.

The Yankees make sure everyone gets involved, with contests each inning and about a dozen giveaways with signatures on advertisements in the program. The mascot – Scooter, the Holy Cow – and other spent the game in the stands tossing free stuff to the 4,100 sweaty fans.

Paul loved his job as the hot dog taster, going back a few times during the game for the $1.75 franks, which were “nice and soft, bigger than the roll.” Bottled Pepsi and water were $2. I had a couple of slices of (“Staten Island’s own”) Bario’s pizza, $2 each, with whole pies available for the entire family. Most snacks were brought through the stands by vendors, but you’ll have to walk (not far, though) to get any beer. Vendors stationed near the entrances to the stands sell Corona, Coors Light, Beck’s and Rolling Rock for $2.50 to $3.50.

As Nat King Cole sang while we filed out of the park, “You’ll wish that summer could always be here.”

« A visit to Bridgewater the Patriotic thing to do
A new year, a new blog »