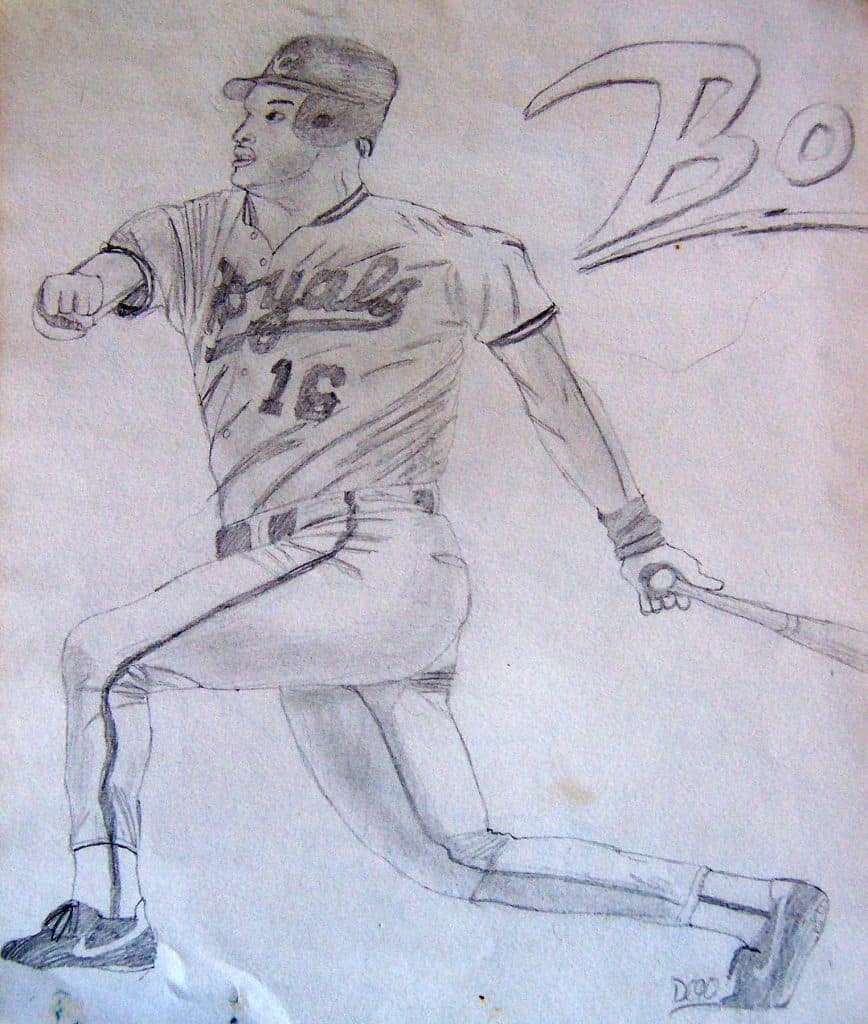 Bo Jackson is 54 years old today. Fifty-four! That doesn’t seem right, but Time doesn’t care. It means his peak was half a lifetime ago: He played the 1990 season — his last full baseball season — at 27 years old. In January 1991, he sustained that injury to his left hip and was never the same.

And while there are plenty of highlights from his short and legendary career, the one that stands out to me is one I saw in person:

It was July 10, 1988, a warm day at Yankee Stadium. My dad and I were sitting somewhere above straightaway left field — either the mezzanine or near the front of the upper deck. I know we were in the sun and a bit back from the field. Jack Clark came up in the seventh with the Yankees trailing, 4-3, and two outs and nobody on base. He connected on Rick Anderson‘s 1-0 offering and drilled it to deep left field.

I remember rising to my feet with the crowd, looking down as the ball descended to the wall, its arc meeting the rising glove of Jackson — and that’s all it was, his glove and left arm. As he ran back to the warning track, he disappeared from my view, blocked by the wall. Then his glove and arm reappeared and snatched the orb out of the air. He ran back across the grass toward the Royals’ dugout, his name and number in white shining off the back of his baby-blue uniform.

It might not be his most spectacular catch (and certainly is not his most memorable meeting with a wall), but it has stayed with me all these years. This is why we go to games, to say we were there when something significant or historic happens. Even now, with high-definition TVs and myriad streaming options, there’s still something to be said for being in the arena watching the best athletes in the world exhibit their talents.

Short of putting a tape into the VCR to record the sports segment on the news, I don’t know if I ever expected to see that play again. I’m not sure if I’ve seen it again until last night, when I searched online to see if there was video of Jackson robbing a Yankee of a home run. I couldn’t even be sure if it was as great a catch as I remember, but its digital existence proves that point — I mean, that is some impressive height he gets on that leap.

These days, we can watch the highlight within minutes on our phones, but 28 years ago all we could do was wait until the evening news (at least that’s all those of us who didn’t have cable could do). I’m not sure if I thought this that day, in the stadium, but I have a memory of thinking I’d have to look for that play that night on the news, and ask my friends the next day if they saw it, to tell them I was sitting in the stands behind that wall, lined up almost perfectly with the flight of the ball, watching it fall into the glove of a 25-year-old phenom in just his second full season who was already doing things we’d never seen before.

« The Christmas Babe
Baseball on the wall in ‘Seinfeld’ »