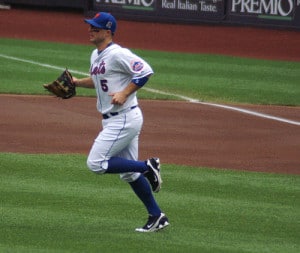 [NOTE: I actually had this written and set to go up last night, but then Polanco went on the DL, so it no longer carries the same weight. But here it is nonetheless.]

David Wright has played in each of the past four All-Star Games ever since being voted in as a starter for his first one in 2006. He homered in his first All-Star at-bat and hasn’t stopped hitting, picking up one base hit in each contest. Here are his statistics.

If you count the 2004 Futures Game, he had a hit in that, too. He was also named to the Double-A All-Star Game that year but did not attend because he was promoted to Triple-A before it was played.
In 2003, he was named to the Florida State League All-Star Game and in 2002, he played in the South Atlantic League All-Star Game in Lakewood. He did not make the 2001 Appalachian League postseason all-star team (only a list; there is no game), but still had a solid debut, hitting .300 with seven doubles, four homers, 17 RBIs and nine stolen bases in 36 games at age 18 in the short-season league.

[Cool side note on that: I could not find the 2001 postseason all-stars for the Appy League online anywhere, so I went to the league site and sent an e-mail to the address provided in the “Contact Us” link. Only an hour later, I got a response from none other than the league president informing me that Wright was not on that postseason all-star team. The only Kingsport player to make it was shortstop Sean Pittman, who topped out at high-A St. Lucie in 2002. I wonder if there was another shortstop blocking his path to the bigs?]

As of now, though, 2001 and 2005, his first full year in the Majors, are the only professional seasons in which Wright wasn’t named to an all-star team. He’ll almost certainly be named to the NL squad this year should he not win the starting nod, but why leave it to chance? He’s got the numbers this year to earn the spot, so let’s make sure he gets there.
VOTE WRIGHT!
« Elimination of the competition is no reason to let up
David Wright’s jersey set »