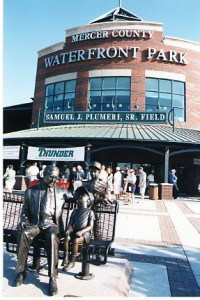 This is the seventh in a series. Previous posts are:

It might be the setting – on one side, rows of houses on the outskirts of Trenton; on the other, the flowing water of the Delaware River, at this point still respectably high despite the lack of rain.

It could be the tenure – only in its sixth season, Waterfront Park and the Trenton Thunder are the senior members of New Jersey’s collection of minor league baseball teams.

Or maybe it just comes down to the players and the level of baseball being played before 6,000 fans every night. As the Boston Red Sox’s Class AA franchise – only two rungs from Fenway Park on the organizational ladder – the Thunder players are among the best of Red Sox future. There’s the chance one of the players can take the field as a member of the Thunder and walk back into the dugout to be told he’s got to pack his bags for Pawtucket or Boston.

Some names on the back of those Boston road jerseys are still familiar to loyal Thunder fans – Lou Merloni, Brian Rose and Nomar Garciaparra. Bret Saberhagen even made some starts for Trenton while rehabilitating his arm on the way back to the majors.

Now there are new players making their names known. By this time next summer we could be reading about Rafael Betancourt, Andy Hazlett (it should be noted here at the Shore that the Oregon native pronounces it Hays–lett), David Gibralter or Nate Tebbs starring on Yawkey Way. Tomokazu Ohka, the first native of Japan to play in the Red Sox organization, can still be found in this year’s Thunder yearbook, and I saw him get rocked by the Tigers in Detroit two weeks ago.

Trenton does it all. The ticket prices and between–inning entertainment are minor league, the pinstripes and four different hats (one each for home, away, Sunday home and away on cloudless weeknights or something) are major league. The players for both teams are young and aggressive, flashy when they can be and resourceful when they need to be. You can’t help but enjoy yourself in a packed stadium on a summer night with the breeze blowing off the river.

I drove out to Waterfront Park on Tuesday with my sister, Jessica, and we met a family friend and Notre Dame classmate, Liz Petruska, who had a considerably shorter drive from Hopewell. It took us an hour from the Shore. Regular readers of this column may notice that every park but Skylands in Sussex County has taken 45 to 75 minutes to reach. Even with the construction closing Route 29, the traffic off the interstate was bearable. As a result, we took Cass Road, also named Thunder Road, which is certainly appropriate considering Mr. Springsteen’s current run at the Meadowlands. Couldn’t find Roy Orbison singing for the lonely, though.

Unlike any of the previous parks I’ve visited, I called ahead for Thunder tickets, but only on one day’s notice. Still, we had good seats just to the first–base side of home plate in the last row, right in front of the reclining chairs set up on the concourse for the Stevens Furniture “Best Seat In The House” promotion.

As they’ve done all season – forgive me, but it’s hard not to use this one here – the Thunder rolled. Second baseman David Eckstein led off the game with a triple and finished with four hits in five at–bats, only a home run short of the cycle. The New Haven Ravens – the Mariners’ affiliate – put four runs up in the fourth for a 4–2 lead, but the Thunder stormed back (sorry again) and held on for a 5–4 win.

After the game, the stadium announcer mentioned that Trenton’s magic number now stood at 20. Magic number! That’s not a phrase you usually hear two days into August unless you’re talking about the 1998 Yankees. But this team is blowing through the Eastern League with a 151/2–game lead late last week on the Norwich Navigators, the second–place team in the Northern Division. The entire South Division is within eight games of first place.

You may have noticed from other ballparks, but the concession prices are always the same. In Trenton, the rather hard cheeseburger cost $3.25 and a helmet full of fries was $4. A huge soda, probably a liter, was $4.25 in a souvenir cup. A glance at the board told me water costs $2.25, juice $2.75, glasses of chardonnay and white zinfandel $3.25 and beer (Miller Lite, Coors Light, Michelob, Yuengling Black and Tan, River Horse Ale) anywhere from $3.50 to $5. Jessica, Liz and I kept talking about getting cotton candy – and how none of us could remember ever seeing it come in purple – but we settled for Carvel ice cream that was perfect for the warm night.

The success of the Thunder in Trenton has happened all over America with teams in similar cities sparking a rebirth, drawing people back from the suburbs. They’re roaring down Thunder Road, and it looks like this year it will end in a championship.

« Phoenix in the offseason
The Mets are better off »