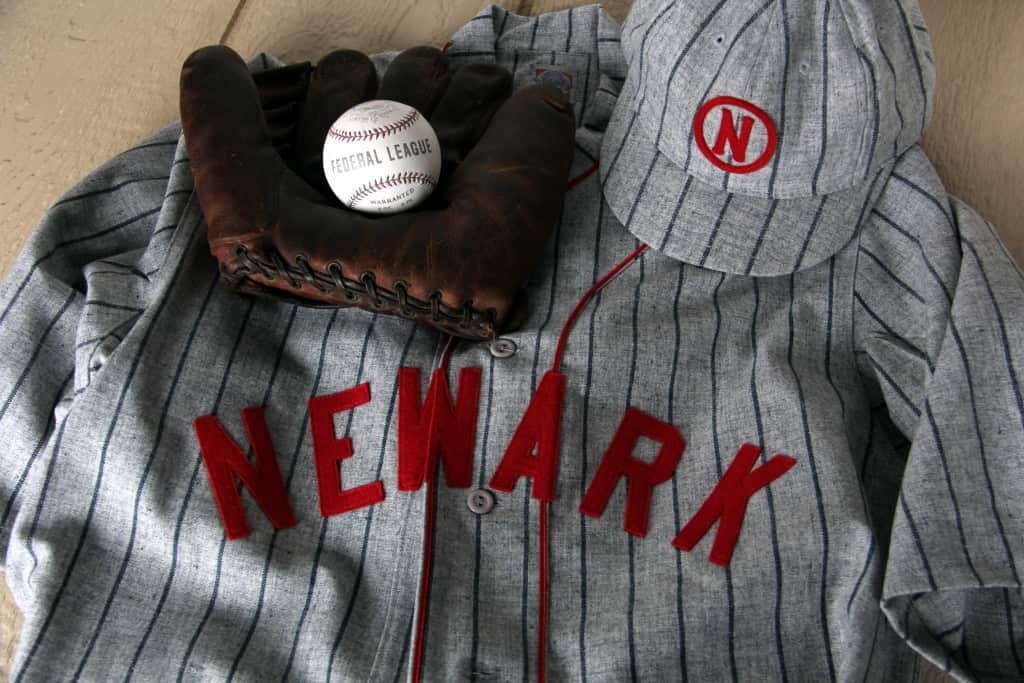 You wouldn’t. Chances are no one alive today would have actual memories of the one summer New Jersey boasted its own major league baseball (not capitalized on purpose) team. That’s because this year marks the 100th anniversary of that summer — 1915, when the short-lived Federal League placed a team in Newark for its second (and final) season.

But was the Federal League really a major league? In my opinion: No — and yes. Several baseball scholars have argued that the quality of play — that is, the ability of the players and their performance in the American and National leagues before and after their Federal tenures — falls short of what the two established circuts offered. And it’s hard to argue those points. The stats just don’t support it. If you think of a major league as the place you’d go to see the best in the sport, then no, the Federal League only boasted a handful of such players — probably not enough for two starting lineups.

Where the Feds do qualify as a major league, in my mind, is their status at the time, their ambitions, and the way the National and American leagues (Organized Baseball) dealt with them (not, however, in how the Organized clubs regarded the Feds). The Federal League operated from 1913-15, but only boasted itself as a major league in the latter two years. It was then that the circuit placed teams in four markets ruled by American and National league clubs: Chicago, St. Louis, Pittsburgh and New York — not to mention cities that would one day become Major League (Kansas City and Baltimore) and another that hoped to be (Buffalo). The eighth city was Indianapolis in 1914, then Newark in 1915. And while Organized Baseball did not accept the Federals as equals, they soon found that the outlaw league might pose a threat.

In the end, the Federal League did not fade away, beaten back at the turnstiles by the Giants and Dodgers, Cubs and White Sox, Pirates and Cardinals and Browns. It took a cease-fire in what has been called a baseball war, a boardroom compromise that gave some Federal League owners concessions like ownership in Organized clubs and payment for players under contract to a league that was no longer operating in 1916. Even years after the Federal League had faded from memory, its players retired from Organized Baseball and its ballparks razed or burned down — save for the one still standing today on the North Side of Chicago — one significant organization still saw the outlaw league worthy of mention alongside the Organized circuits: four players’ Hall of Fame plaques mention the Federal League by name.

The Feds’ pursuit of some of Organized Baseball’s best players — none better than Walter Johnson — may be what ultimately led to the “peace agreement.” After the Federal League’s two seasons, some 60 percent of all players who appeared on Federal rosters had Major League experience (though it must be said that 101 of those 172 players who jumped from the AL or NL to the FL ended their careers in 1915, never to return to either of the Organized leagues).

In the simplest terms, the AL and NL may have agreed to a compromise to do away with the Federal League to 1) keep the Feds from pursuing their players and 2) eliminate any possibility that the outlaw circuit could gain the foothold it needed to truly establish itself as a threat.

In my mind, the players the Feds recruited, the salaries they paid and the crowds they were able to draw are what made the league a major league of its time — remember, there was no Major League Baseball, no commissioner. The National and American leagues were two separate entities with an agreement to have their champions face off at the end of the season to determine an overall “major league” winner via a best-of-seven series. The Federal League hoped to be a part of that and saw itself on the same level. Chicago’s Federal team, the Whales, would outdraw the Cubs when they both played on the same day — maybe not regularly, but on occasion. Name a minor league — whether independent or affiliated — in a Major League suburb today that could do that. Newark’s Opening Day total was said to top 25,000 (with 5,000 more turned away) while the defending World Series champion Boston Braves drew an estimated 12,000 on the day it began its title defense.

So those are the arguments for considering the 1915 Newark Peppers — or Newark Federals, or NewFeds — as New Jersey’s first, last and only major league baseball team. I’m not saying that they could have competed on the field with the Giants or Dodgers or hapless Yankees of that time, but based on contemporary accounts and the actions of the leagues (National, American and Federal), I think the fans of the time, when heading across the Passaic River to the ballpark in Harrison, felt that they were going to a big league game.

I want to celebrate the 100th anniversary of the Peppers, who played their first game 100 years ago tomorrow, April 10, 1915, in Baltimore. In the coming months, I’ll try to revisit some of the highlights of that year, though a few have already seen their anniversaries pass: