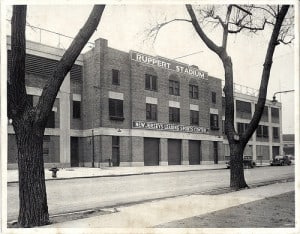 The Hall of Fame unveiled the 2013 Pre-Integration Era ballot over the weekend, and it includes a New Jersey connection: Jacob Ruppert — known as the Yankees owner who acquired Babe Ruth — is also the man for whom Newark’s Ruppert Stadium was named.

The Yankees owned the Newark Bears from 1931-47 (when they moved the franchise to Springfield, Mass.), and Ruppert’s name was put on the stadium in 1934. It previously had been Davids Stadium and Bears Stadium. Should Ruppert be elected, the glory days of Newark baseball will be well-represented in Cooperstown (beyond the star players who suited up for the Bears and other teams), after the election of former Newark Eagles owner Effa Manley in 2006.

As for the annual player ballot — you may have heard of it, what with Barry Bonds, Roger Clemens, Mike Piazza, Sammy Sosa, Curt Schilling and Craig Biggio eligible for the first time — an announcement is expected at the end of the month, and any candidates selected for enshrinement will be revealed in early January.