The first baseball cards I got as a kid were from the 1985 Topps set. Those block letters set at an angle, colorful fronts and the moss-green backs with red lettering (like Christmas in every pack) still take me back to a specific part of my childhood, of the pharmacy down the street where I’d buy my packs.

Two years later, I started going regularly when, in 1987, I started chasing the complete set. Then in 1988, my collecting really took off as I bought Topps by the wax box and dove into the new Score set. (I never really chased after Donruss or Fleer as much, though whether it was because those sets didn’t appeal to me as much or they weren’t carried in my neighborhood, I’m not sure.)

But the ’85 set stands out, because even though I didn’t come close to collecting all of them, that was the first time I bought any packs regularly. Plus, it had two seminal subsets: the 1984 Olympic baseball team and the Father/Son cards. The Team USA cards, of course, took off when, three years later, the Mark McGwire card became his true rookie card.

But I didn’t really get the concept of the Olympic team at that age (I don’t recall any of the ’84 Olympics, even though I was 8 years old; it wasn’t until the ’88 Olympics — and Ben Johnson — that my sports world expanded). So it was the Father/Son set that drew my interest, particularly the card of Yogi and Dale Berra — the once and current Yankee, even though Dale’s photo on the Father/Son card showed him with the Pirates. Probably because he was the Yankees manager at the time, Yogi Berra was to me everything the Yankees were — the history and all that. We weren’t (and aren’t) a Yankee family, so my parents never told me about Joe DiMaggio or Mickey Mantle or even Thurman Munson. So Yogi stood out as the representative of the pinstripes. And because of that, the Berras’ Father/Son card struck me as possibly being the coolest card in the set. (Plus, even then, I think I was aware that Yogi lived in Montclair, which though a long ways away — at 9, I judged distances by whether or not we had to drive on a highway to get there — was the town where my mom’s aunt and uncle lived and near my grandparents’ house.) 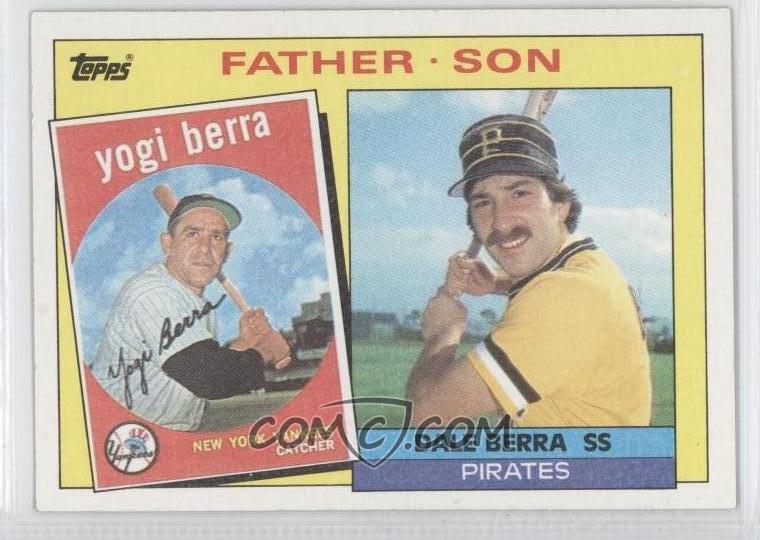 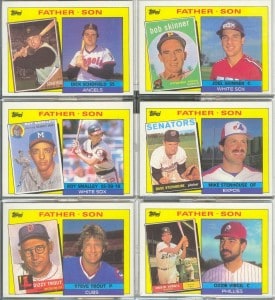 And so I got to thinking about some of the other Father/Son cards — the Schofields, Bells, Kennedys, Boones, Laws, Skinners and Franconas. That led me to some of today’s players whose fathers played the game and I wished that Topps would bring back the Father/Son cards. While I think some of their recent player pairings have been fun to see, I’d like a reprise of actual baseball lineage, more than just “Legendary Lineage” as Topps sees it.

I know others out there on this series of tubes we call the internet have Photoshopped some recent Father/Son pairings, but I wanted to do a whole set in the 1985 style — 13 cards showing the father on a Topps card of yore and a photo of the current player in a pose with his current team. The restrictions of current players eliminated some recent offspring who played, like Brian Bannister (who’s now in Japan) and Ken Griffey Jr. But I still found enough pairings for 13 cards, including some current stars and some past heroes. And true to the ’85 originals, they can’t all be studs, so there’s even a direct descendant of the Berra card featuring a Hall of Fame dad and a well-traveled, role-playing son. 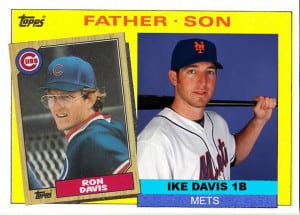 Ike Davis was the first card I wanted to (re-)produce. Hardly a week goes by without the Mets’ announcers mentioning Ron Davis’ career, which spanned 11 years and five teams, mostly the Twins and Yankees. And Ike, of course, seems to be the face of the New Mets, the future from here.

I’ll go alphabetically for the rest … 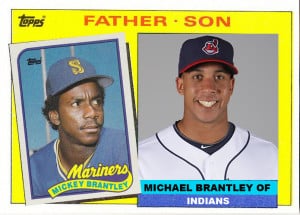 Michael Brantley is projected to be the Indians’ starting left fielder this year. He was the player to be named later in the 2008 trade that sent CC Sabathia to the Brewers. Mickey Brantley played 302 games in four seasons with the Mariners. This 1989 Topps card records Mickey’s best season in ’88: .263/.296/.399, 15 home runs, 56 RBI and 18 stolen bases in 149 games. 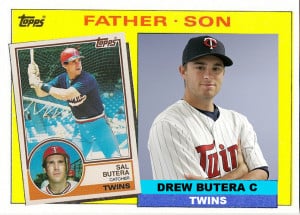 Sal Butera spent four of his nine seasons with the Twins, but Drew was drafted by the Mets in 2005. (I recently discovered that I saw Drew Butera play for the Hagerstown Suns, catching for Jon Niese in a game in Lakewood in 2006.) The Mets dealt Drew to Minnesota as one of two players sent over for Luis Castillo, so if there’s one good thing to come out of that deal, it’s that it allowed the Buteras to become the first father-son duo in Twins history.

Robinson Cano is one of the biggest stars in this set, an All-Star second baseman for the sport’s biggest draw in its biggest market. Jose Cano is one of the smallest, a right-handed pitcher whose entire career consisted of just six games with the Astros in 1989. 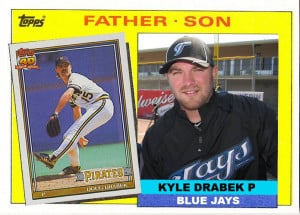 Other than Ike, Kyle Drabek is probably the baseball heir I’m most interested in seeing this season. A first-round pick of the Phillies in ’06, Kyle pitched for the BlueClaws before being dealt to Toronto in the Roy Halladay deal. He made his debut last September, losing all three of his starts, but that was just a cameo. It’ll be interesting to see what he can accomplish this season, particularly if he sticks in the rotation after Brandon Morrow returns from the disabled list. Doug Drabek, of course, pitched 13 seasons and won a Cy Young Award while with the Pirates in 1990, going 22-6.

Here’s another well-known duo, though one that doesn’t speak to one another anymore. I think that makes Prince Fielder’s expression on this card very apt — it’s what he might look like if someone told him he were going to be on a baseball card with his father. Cecil Fielder made his name after his stint in Japan — which followed his four seasons in Toronto from 1985-88 — when he returned stateside to hit 204 home runs for the Tigers, Yankees and Angels. I was at Yankee Stadium for the final game of the 1990 season, when Cecil hit two home runs to finish with 51 — the first 50-homer season since George Foster in 1977. 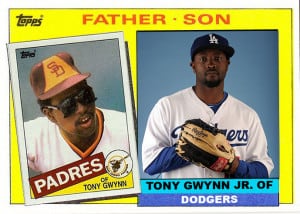 I nearly produced an error card in this set. After uploading all these images to the blog, I then went through to write the text and when I got to this one, I noticed I had neglected to change the player’s name and team below Tony Gwynn Jr.’s photo; it still read Adam LaRoche, Nationals. This card is the equal of the Berras’ card from ’85: a Hall of Fame father in Tony Gwynn and a son who hasn’t developed into a star. I’m not faulting the offspring here, just making a comparison. 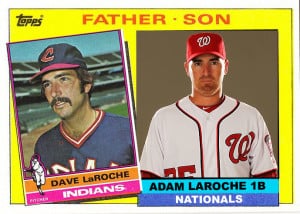 It’s a shame, but if there’s one thing Adam LaRoche doesn’t have, it’s his dad’s sense of facial hair style. Dave LaRoche remains in the game, most recently as the pitching coach in 2010 of the Las Vegas 51s, the Blue Jays’ Triple-A affiliate. 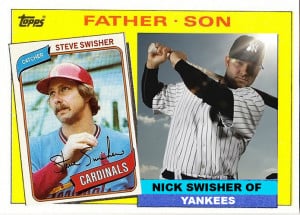 Before he landed with the straitlaced Yankees, Nick Swisher had a flair for the hair, just like his dad. Nick has been known long before he broke into the big leagues, based on his good fortune to be drafted by the A’s in 2002 — the Moneyball draft — out of Ohio State. Steve Swisher was a Bobcat, not a Buckeye — he went to Ohio University. 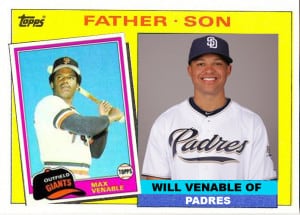 Man, Will Venable looks happy to be a ballplayer! He has good reason to be, penciled in as the Padres’ Opening Day right fielder. Last year, he and Gwynn Jr. roamed the PETCO Park outfield together. Max Venable spent eight of his 12 seasons in California, playing five years with the Giants and three with the Angels. 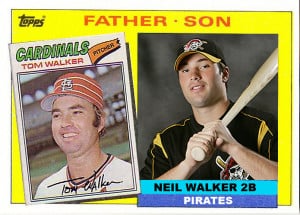 Neil Walker is, like the younger Drabek, a guy I’m interested in watching this season. It’d be nice if the Pirates had something good happen with another homegrown player. And I love this card of Tom Walker, primarily because it features the Cardinals’ pillbox cap. If the Pirates have a throwback day in their pillbox lids, I may have to update this card. 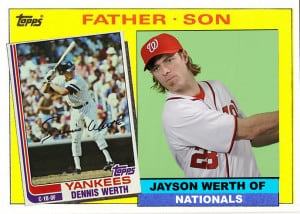 This is the fifth card in this set with a Yankees connection (Ron Davis, Doug Drabek and Cecil Fielder also played in pinstripes, not to mention the two sons who currently do). This one might require an asterisk, because Dennis Werth is the stepfather to Jayson Werth, but the fact that Jayson has Dennis’ surname is a good enough relationship to me. 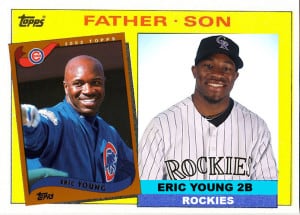 And we close with EY and EY Jr., a pair of Jersey boys and a duo that played for the Rockies. Eric Young grew up in New Brunswick and played at Rutgers; Eric Young Jr. was drafted by Colorado out of Piscataway High School. I really wanted to use a Rockies card of EY, but the Google search did not turn up one suitable enough, and my collecting era ended before he joined the Rockies for their first season in 1993, so I don’t have any in my possession.

We almost have a full starting lineup with the sons in this 13-player set — only shortstop and third base are missing. I’m sure we could move Robby Cano over to short and maybe young Walker or Young could shift to third to fill the hole there. The roster of fathers is heavy on pitchers and outfielders, so we’d need to play several of them out of position in order to stage a father-son faceoff on the diamond.