I’ve got a few posts planned for this week and I want to roll them out gradually to try to re-establish some sense of regularity here. I figure if I can write ahead and set things to post at regular intervals, such a backup plan might allow me to write more timely posts in between. And to start off this new approach, I’ve got what I’m calling Enabler Week. Thanks to two other bloggers out there (whose blogs you’ll find in the right column under Road Games), I fulfilled a childhood wish this weekend and over recent weeks have begun a new collecting endeavor.

First with the childhood wish; the endeavor will be a subsequent post. The height of my baseball-card collecting years was 1987-90, so deemed because those were the Topps sets for which I had the most cards, the result of furious wax-pack buying sprees. (I say “had,” because earlier this year, overcome by a wave of nostalgia, I actually added to my stash when I purchased on eBay a lot of five unopened Topps boxes — one for each year from 1986-90.) Looking back, it’s hard to believe that my active collecting years was such a short period, because at the time it seemed like my entire life. But once through my freshman year of high school, the interest in collecting waned. My passion for the game remained, but my friends and I had less interest in spending money on cards and more on hanging out together — and with girls. It was around this time (the early ’90s) when the bubble burst on the card industry, not to mention the proliferation of sets that made it more complicated to figure out what to collect. It used to be a lot easier when Topps had one set of 792 cards, not various series, refractors, blasters, relics, variations and autographs. Overwhelmed, we moved on to other things.

But I never threw out any cards, and my mom knew better than to dispose of them. I collected a few autographs, as well, going to local signings and trying my hand at mailing cards out to players with SASEs included. That yielded mixed results, among them — as best I can tell, since I’ve never bothered with authentication — full participation from Orel Hershiser, partial from Mike Schmidt and a clubby’s stamping Kevin Seitzer’s autograph on the two cards sent to Kansas City.

And it may be that my collecting habit sparked my interest in photography. On every trip to the local card/stamp/coin shop, I’d flip through the album of 8×10 photos, eventually buying a few. Among them were Brooks Robinson, Gregg Jefferies and Mark McGwire. Looking back now, I can’t remember if I bought them thinking I’d try to send them off for autographs and hope they’d be returned or if they were purchased in anticipation of an upcoming signing or a ballpark attempt at an autograph. I feel like the Robinson photo was bought for a specific signing — either a local show or a by-mail signing — but for some reason, I never followed through with it. Yet I kept the photos in their clear plastic pages, stored safely in a binder with other photos and my small collection of autographed cards.

Which now brings me to the enabler part. It began with a post last month by Paul on his eponymous Paul’s Random Stuff blog. He mentioned MAB Celebrity Services’ monthly show at a hotel in Secaucus, and when I saw that Brooks Robinson and Gregg Jefferies would be part of their lineup this past Saturday, I put it on my calendar. It wasn’t until Saturday morning — once I remembered that the show was that day — that I decided to head over and complete my autograph mission. Secaucus is conveniently 15 minutes from my house, so in leaving at 11:30 — the time Robinson started his 90-minute signing window — I still arrived with plenty of time to buy my tickets and browse some of the vendors while waiting for my number to be called.

Robinson was very pleasant and cordial and a delight to meet. He took the time to look each visitor in the eye and say hello, extending his hand for a shake. He stood up every time someone slid around the end of the table for a photograph when he easily could have remained seated. He may be 73 years old, but he didn’t use that as an excuse. Haters may say anyone can be cordial for 90 minutes when he’s being paid (and at $49 each for the cheapest level, Robinson was one of the best-paid there), but not all of them are. Robinson shook my hand as I put the photo on the table and told him a brief version of this story (about buying the photo 20 years ago but not getting it signed until this day) and he asked if I wanted anything particular written on it, though I can’t recall if MAB was charging extra for personalization with him. I told him I’d be happy with his HOF 1983 postscript. I love how Hall of Famers use that.

When he finished signing — left-handed, I might add, something I didn’t know about the right-handed thrower and hitter — he shook my hand again and wished me a happy holiday, making him the first person to do so this season, two weeks ahead of Thanksgiving. Robinson’s autograph pushes my confirmed Hall of Fame signatures to seven — Robinson, Nolan Ryan, Ferguson Jenkins, Rollie Fingers, Johnny Mize, Bob Feller and Bob Gibson — and the possible list to 12. The unconfirmed are Kirby Puckett (two cards mailed to him when he played), Mike Schmidt (four cards mailed to him, all returned but only one signed, along with a signed form letter), Johnny Bench (a card bought from that favorite card shop), Gary Carter and Cal Ripken Jr. (signed postcards sent by the team when I wrote to them as a kid asking for pocket schedules). I’ll devote future posts to these others. 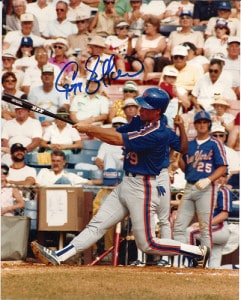 Because of the small show and as a failsafe to prevent me from spending too much money, I went home after getting Robinson’s autograph because Jefferies wasn’t signing until 2 p.m. I did make a few purchases, but those will be addressed later this week when I reveal the second enabler. I returned to Secaucus right at 2 o’clock and went back to a dealer from whom I’d bought two cards earlier in the day. I realized there were a couple others he might have so I wanted to peruse. Just as he was handing me my change, my number came up for Jefferies. This line moved a lot faster than Robinson’s, perhaps because few people asked for photos and partly because Jefferies focused more on signing and telling the MAB rep taking tickets at his table some tale about his trade from the Phillies to the Angels in August 1998. I’m not saying he was a jerk, but he was no Brooks Robinson.

Jefferies was one of my absolute favorite Mets as a kid, maybe because he was a small guy who I could relate with. I remember a minor league update on WFAN during a pregame show sometime in 1987 when I first heard his name, and from that point on, I kept his name in mind, then followed him closely when he hit the majors in ’88. But now, thanks to a career in which I’ve met ballplayers and, in college and from being in New York, other celebrities, I’ve become desensitized to becoming starstruck. So going in, I wasn’t getting my hopes up for a gregarious, beaming welcome from Jefferies.

So while the signatures weren’t cheap, I’m glad I got them, and I’ve already got my eye on some upcoming shows, all thanks to Paul and his autograph efforts (not to mention his rundowns of upcoming signings). Thanks for the unintentional assist, Paul!