I did something I’d never done at Shea Stadium before: I fell asleep.

Here’s the backstory: I worked Wednesday night, but managed to get into bed by 3 a.m. I planned on a good six hours’ sleep before waking up to dash to the ATM for cash, have breakfast, shower and get on the train. What I didn’t count on was the trucks showing up outside the house at 7 a.m. to repave the street. With our windows open (I love sleeping under the ceiling fan with the breezes instead of the air conditioner when I can help it), I wasn’t going back to sleep as they began the resurfacing.

I got to Shea early enough to get onto the field level while batting practice was still in progress, and by sticking to the concourse, I wasn’t asked for a ticket — and so I didn’t have to leave. I spent the first five innings making my way back and forth from the right-field corner to the left-field corner, with an occasional pause in the area behind home plate. Those three spots are the only places you can see the field. In between, along the baselines, the concourse runs under the seats as they rise up to meet the loge section. 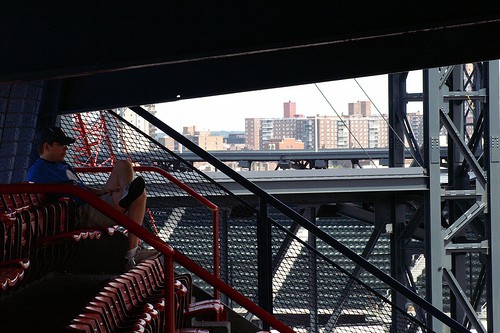 Finally tired of standing that whole time, and weary from my late night at the office, I made my way to the upper deck, finding a lightly populated — and shady — section out in left field. Only a row or two from the top of the stadium, the breezes were pleasant, the view sweeping and the legroom ample. I put my camera bag down on the seat next to me, draped my legs over a seat in front of me and rested my arms on the seat backs beside me. Cooled by the zephyrs off the bay and lulled into a relaxed state by the far-off action on the sun-drenched field, I felt my head bobbing, my eyelids growing heavy. Eventually, I stopped fighting it and let myself doze off. The Mets won, 7-3, and I added another first to my Shea Stadium resume in its final season.