While looking through my baseball photos on Flickr the other night, it hit me just how many times I’ve been fortunate to see a brilliant sunset while at the ballpark. So, hey, the natural thing is a post about it, right!? 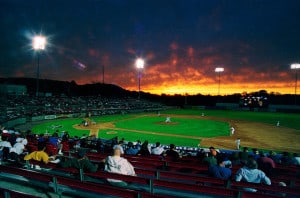 This was the first one, in 1999 — and will likely remain the best. It will be hard to top. We ran it in the newspaper, too, when my column about Yogi Berra Stadium ran. 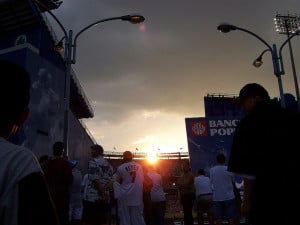 I stepped off the subway on a sweltering July night in 2005 for Merengue Night at Shea Stadium and before entering the ballpark was nearly blinded by the setting sun over the top of the stands. 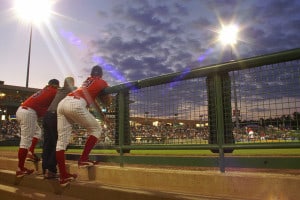 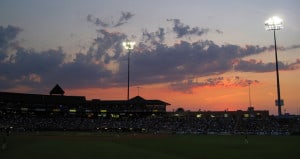 I’ve spent many a night at Lakewood’s FirstEnergy Park, more than at any Minor League field — though as a reporter, I didn’t usually have my camera with me, so who knows how many sunsets I missed. The first was taken from the dugout in 2006, the second from the berm beyond right-center field last August. 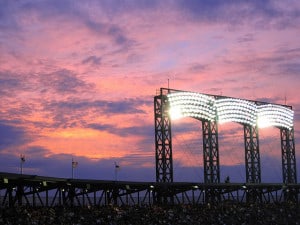 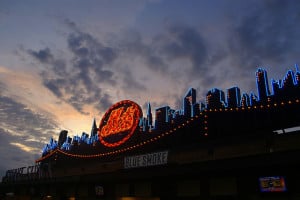 The first great sunset came on the first — not-great — night. Opening night, spectacular colors on the clouds. The second was one of many nights spent in Danny Meyer Land; this particular one was in September 2009. 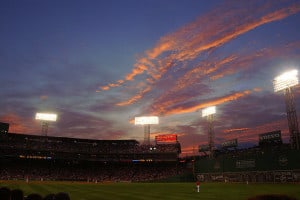 It was a wonderful Memorial Day weekend in 2009 — the Mets were at Fenway on the weekend we make our annual trip to Cape Cod, so we delayed our arrival in Hyannis to Saturday morning so that we could watch Johan Santana vs. Daisuke Matsuzaka. Before a Mets win, we got this sky show. 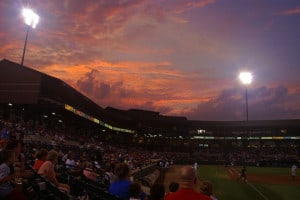 Last August, just a few weeks before the Sod Squad shot in Lakewood, I stopped at Ripken Stadium in Aberdeen, Md., on my way back from Baltimore and the sky turned orange for the former Oriole.

Wow. Now this has me eager to get back to a ballpark. Just a few more weeks!