The first player to play professionally after attending Notre Dame also remains the first player on the list of his fellow Domers to experience The Show. He also retains the top spot in many Chicago Cubs career records — hits, doubles, runs, RBI and WAR, as well as several other recent stats they never dreamed of in the 19th Century.

But there’s not much that can be said about Cap Anson that hasn’t been written already. (In particular, check out SABR’s bio of Adrian Constantine Anson.) He was baseball’s first star, its first player to collect 3,000 hits, and its model for endurance — no hitter has matched his 27 years as a pro (though Anson’s longevity had as much to do with his status at the White Stockings’ manager for 18 years as it did with his ability). 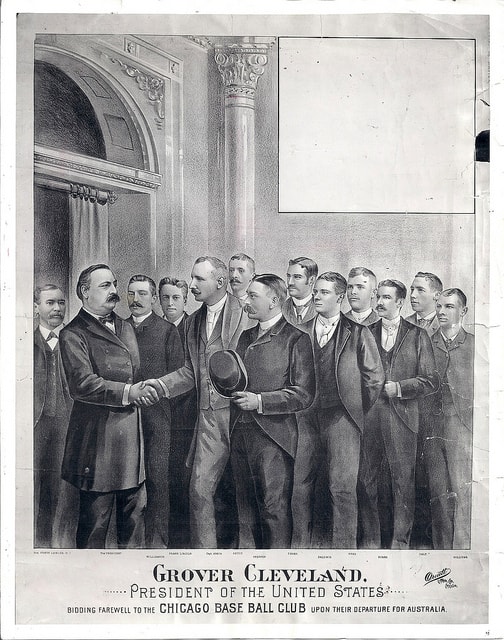 Unfortunately, Anson was also one of the first to draw baseball’s color line. David Fleitz sums it up in the SABR biography:

Regrettably, Anson used his stature to drive minority players from the game. An 1883 exhibition game in Toledo, Ohio, between the local team and the White Stockings nearly ended before it began when Anson angrily refused to take the field against Toledo’s African-American catcher, Moses Fleetwood Walker. Faced with the loss of gate receipts, Anson relented after a loud protest, but his bellicose attitude made Anson, wittingly or not, the acknowledged leader of the segregation forces already at work in the game. Other players and managers followed Anson’s lead, and similar incidents occurred with regularity for the rest of the decade.

Another well-publicized incident occurred in Newark, N.J., in July 1887. The account, as described in Robert Peterson’s Only the Ball Was White:

On the same day the International League’s directors put up the color bar, the Newark Evening News announced that big George Stovey would pitch an exhibition game against the Chicago White Stockings at Newark on July 19. As the ace of the Little Giants’ staff, Stovey was a natural selection to face the White Stockings, who were led by Adrian Constantine (Cap) Anson, one of the greatest players in baseball’s history, the Babe Ruth and John McGraw of his era.

Newark beat the vaunted White Stockings in that exhibition, but the Little Giants did it without the services of Stovey, who, said the Evening News, “complained of sickness.” Sporting Life‘s Newark correspondent had nothing to say about Stovey’s indisposition but commented, “There was not an objectionable feature during the game, and the ‘champs’ leave here with the best wishes of our people.”

A year later Sporting Life admitted that Stovey’s complaint of sickness was involuntary and that the real reason he did not pitch was because Anson refused to field his team if the Negro played. It was another first in organized baseball, this triumph of race prejudice determining a manager’s judgment; it was not, however the first — or last — attempt.

And it goes on from there, citing other instances of racism and pondering Anson’s stance considering his status as the first white child born in Marshalltown, Iowa, his early playmates having been Pottawatomie Indians and his entire career spent in northern cities.

Anson attended Notre Dame from 1867-68, playing for a school team called Juanitas alongside his brother, Sturgis. In 1869, the campus weekly, Scholastic, listed the nine clubs on campus and their members — totaling 185 players, or about 90 percent of the student population, as noted in Cappy Gagnon’s Notre Dame Baseball Greats.

Juanitas won the campus title in 1868, prompting a laudatory poem in Scholastic, part of which praised the Anson brothers:

When short stop Anson caught that foul,
Buncum! The captain cried;
And well he might, for nary fowl
Can safely near him glide.

Bold Anson holds the centre field;
His eye upon the bat;
As well might ball elude his grip
As mouse escapes the cat.

Adrian, who played all over the diamond in his early career — both amateur and professional — was likely the “short stop” and Sturgis the one in “centre,” but the Scholastic editors may have considered a minor alteration to the poem to insert first names. As an editor, I’m just sayin’. Also: I’d like to see “Buncum!” make a comeback as a form of trash talk.

Anson’s status as a Hall of Famer made tracking down a card of him quite easy. In fact, I already had one, thanks to my father, who had a near-complete set of Callahan Hall of Fame cards from the 1950s. I don’t remember when he first discovered the tiny box of 1 3/4-by-2 1/2-inch cards in my youth, but he didn’t hesitate to give them to me. They were instantly the oldest cards I owned and among my favorites, with simple pencil-like drawings and detailed biographies on the back. With no numbers, the set was easy to update after the initial 1950 production of every Hall of Famer to that date, and updates were released from 1951-56. Listing the cards alphabetically puts Anson at No. 2 in the set.

I also supplemented my Anson “collection” with the Sporting News image near the top of this post, in part because I liked how it included New Jersey-born president Grover Cleveland Alexander.

And, finally, I’ll close with Summer Anne Burton’s drawing from her Every Hall of Famer series, which is well worth a look. 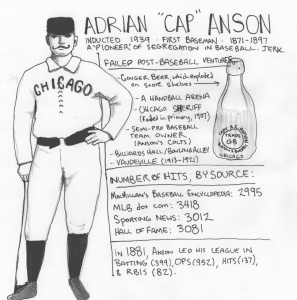