While flipping through Google Reader last night, I came across a post mentioning a rummage sale of sorts at the Yogi Berra Museum at Montclair State. My first thought was, Cool! Glad I checked this post. The second thought was surprise that I hadn’t heard about it sooner. (A third, momentary thought was disappointment that I’d not seen it in time to stop by yesterday, but more on that in a moment.)

Were it not for my news alert for the museum on Google, I would’ve missed it altogether. Our local weekly newspaper, which often has announcements of appearances and programs at the museum, had no mention of it. The only outlets that had it were the previously linked Montclair blog Baristanet and the hyper-local community site Patch.com.

Curious to see what the museum would be selling off, I stopped by this afternoon. On tables set up in the new atrium were photos from former museum displays, a few posters and banners and boxes of assorted Yankees baseball cards (sold in plastic cases of 25, most had  a recent Mariano Rivera showing on one side and an older card — as old as a 1976 Catfish Hunter and as recent as a 2003 Jason Giambi — on the other side, though many of the older cards were recent Topps Heritage reprints). Most of what was left was priced from $10-20, and I overheard a teenage employee or volunteer say that they had a lot of good stuff out yesterday. But not wanting to spend too much money, I was happy to have missed yesterday’s expanded — and likely more tempting — selection.

There were only six of us there when I stopped in: two middle-aged men browsing as I was; the teenaged boy and another employee/volunteer, a middle-aged woman who stood talking with the sixth person, a woman older than she who I quickly recognized as Carmen Berra, Yogi’s wife. With Yogi down in Spring Training, I guess she figured she’d stop by to see how the sale was going.

After eyeing the tables of museum-mounted photos — many showing Yogi in various stages of his life and career, from young St. Louis sandlot player to Yankee rookie to veteran to Mets coach — I settled on two items and passed on two others. I left behind a black-and-white photo of Paterson-raised Larry Doby in his Newark Eagles uniform ($20; similar to this photo, if not actually that photo — unsigned, of course) because it was really heavy. Many of the photos from displays were on thick, metal slabs with wide mounting braces on the back, meaning the whole setup weighed several pounds. And because I want to display these things in my basement, with its thin paneled walls, I didn’t want to have to deal with hanging too many of them. Next to Doby’s photo was the famous one of Bill Mazeroski reaching the plate after his 1960 World Series-winning home run (also $20). Had I seen an image of Yogi in his Newark Bears uniform, I probably would’ve extended my budget. 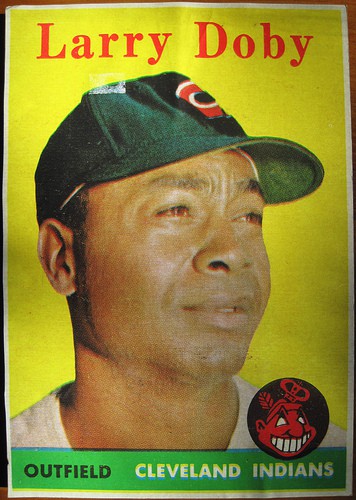 The two purchases I did make, each for $10, were of players with New Jersey roots. The first is this 13 5/8-by-9 1/2-inch printout of Doby’s 1958 Topps card. Born in South Carolina, Doby grew up in Paterson, played for the Eagles (after a tryout at Paterson’s Hinchliffe Stadium) and became the first black player in the American League when he debuted with the Indians three months after Jackie Robinson did with the Dodgers. The image is a paper printout on a foam mount. There’s a minor blemish — it looks like there may have once been a description or something else taped to it — on his cap, but that doesn’t bother me. 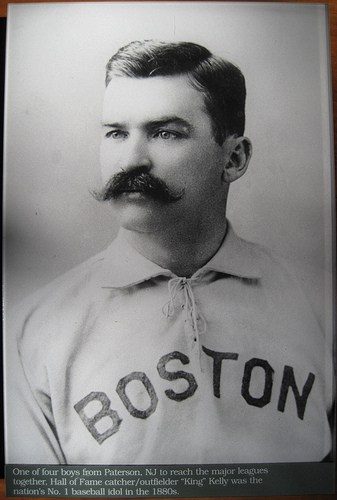 For my second item, I did choose one of those heavy, metal-mounted and braced museum display photos. It depicts King Kelly, a Hall of Famer from the 19th Century who played for the Cincinnati Reds, Chicago White Stockings (later the Cubs), Boston Beaneaters (later the Braves) and New York Giants. He was a teammate of Cap Anson on those Chicago clubs and last August was inducted into the Irish-American Baseball Hall of Fame at Foley’s NY Bar and Restaurant in New York.

The text reads: “One of four boys from Paterson, NJ to reach the major leagues together, Hall of Fame catcher/outfielder ‘King Kelly‘ was the nation’s No. 1 baseball idol in the 1880s.” Measuring 13 5/8 inches by 9 inches, it is a heavy item, so I’ll probably display it on one of the shelves set in the walls rather than try to hang it. Kelly was born in Troy, N.Y., but grew up in Paterson, playing for some of the semi-pro teams in the city before becoming a full-fledged professional. I bought the photo because of Kelly’s New Jersey connection — and his fabulous mustache. It’s a familiar photo, found often, including on his Baseball-Reference page.

So there we go: Building my New Jersey baseball archive piece-by-piece, never knowing where the next thing will come from.