There’s been a lot of talk about Fred Wilpon’s dual homage to the ballpark of his youth, the Dodgers’ Ebbets Field, and Hall of Famer Jackie Robinson in the design of Citi Field. Some Mets fans hate it; some Giants fans wonder where the love is.

As a fan of history — particularly baseball’s — I have little problem with either nod to the past. To me, it’s honoring New York’s baseball history. The Rotunda celebrates Jackie Robinson and the ballpark resembles Brooklyn’s old yard. In a way, the Dodgers left both behind.

But so far, it appears that Citi Field is playing a little more like another former New York ballyard — the Polo Grounds. The outfield dimensions — 277 feet to left field, 455 to center, 258 to right — aren’t anywhere close, of course, but with what seems like Death Valley in center field and a haven for triples in right-center (the Mets have 11 home runs this season and eight triples), there are some similarities beyond the green seats.

The Mets, who have been known for good pitching through much of their existence, are going to have to become known for their center fielders, too — particularly those with above-average defensive skills, like Carlos Beltran. Citi Field gives the outfield captain a lot of room to roam, and if they’re going to have any chance of competing year in and year out, they’re going to need a skilled center fielder who can run down long fly balls that don’t get over the wall.

This point was highlighted for me watching Gary Sheffield’s potential double become an out in the glove of Marlins center fielder Cody Ross on Monday night. When I watched it again later, it reminded me a lot of Willie Mays’ famous catch in the 1954 World Series. 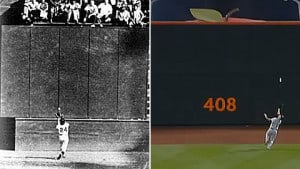 In no way is Cody Ross equal to Willie Mays, and catching a fly ball in April is nothing compared to running down a drive in October — plus turning to make the throw to prevent a runner from advancing — but the two catches did look a little similar to me.

I’m sure it won’t be long until Beltran drops our jaws with a play of his own. He’s definitely done it before.

When Sheffield hit that ball, my initial thought was that he might be the first player to sink one in the Home Run Apple’s bucket. He fell short, but David Wright also came close later with his triple. And Austin Kearns was the first to hit a homer into the batter’s eye around the apple when he did so on Sunday.

So that’s the pool: Who will be the first player to drop one inside the apple’s hideaway? My money’s on Carlos Delgado.