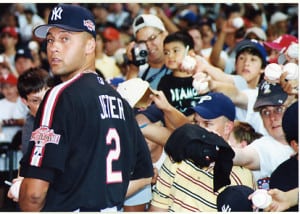 Derek Jeter tied Mickey Mantle on Sunday night for the most at-bats in Yankees history: 8,102. That minor milestone doesn’t really do much for me.

Next year is when it will be interesting. To this point in his career, Jeter compiled those 8,102 at-bats in 9,173 plate appearances. As this season progresses, he’ll pass Babe Ruth (9,197 plate appearances) and probably Lou Gehrig (9,660) to move into second place on that list. And then, sometime in 2010, Jeter will step to the plate for the 9,910th time in pinstripes (or in gray polyester — or CoolBase, if the Yankees are on the road) — and pass Mantle. At that point, no player will have stood in the batter’s box as a Yankee more than Derek Jeter.

And that will be something. Think about it: In all of Yankees lore, from Ruth to Gehrig to DiMaggio to Yogi to Mantle to Reggie to Mattingly to Jeter, of all those Hall of Famers and legends, it will be Jeter — the most recent icon — with more Yankees experience than any other. Ruth and Gehrig, Joe D. and Yogi, they’re all larger-than-life. Many of us have seen only black-and-white photos or old footage. But Jeter is in HD (though his haircut somehow remains stuck in the early 90s). Yankees history books will literally have to be rewritten, because No. 2 will be greater than 3, 4, 5 or 7 in many ways.

They’ll have to do more than just retire his number, but I’m sure they planned for that when they laid out the new Monument Park.

« A black mark
Shades of Mays »