Another night, another no-hitter.

This time it was Matt Garza, finally putting the Rays on the right side of zero-hit history after four instances of being held without a hit — three of them in the past year. Tampa Bay is the first team to experience both sides of a no-hitter in the same season since the Expos, Orioles and White Sox of 1991, the second successive year of a record seven no-hitters. The Rays are also the first club since the 1917 White Sox and Browns to be involved in three in the same season; incredibly, those two clubs both did it, against one another — two no-nos for the Browns over the White Sox and one for Chicago over St. Louis.
The five no-hitters at this date in the season is the most since 1990, the first year of seven, when five were in the books by June 29, the day Dave Stewart and Fernando Valenzuela each pitched one. And that reminded me of this project: 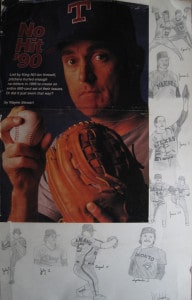 That’s a collage I made sometime during the 1990-91 offseason, using the two-page spread from (I believe) Beckett Baseball Card Monthly (hence the reference to a 660-card set) as the inspiration. The drawings are mine, with Nolan Ryan’s taken from the game itself, after which his teammates carried him off the field. 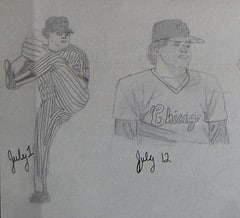 Though the seven no-hitters have stood out in my mind this year as the record, until I went looking for this drawing, I’d forgotten that, at the time, 1990 actually saw nine no-hitters. Down there on the left are Andy Hawkins and Melido Perez, who were each credited with no-hitters that were later rescinded. Hawkins, of course, no-hit the White Sox in Chicago on July 1, but lost, 4-0, after a four-run eighth filled with walks and errors. And just 11 days later, Perez held the Yankees without a hit in a complete-game, 8-0 win at Yankee Stadium — in a game called after six innings because of rain. The Yankees starter and losing pitcher? Hawkins, again. But after a 1991 rule change that required pitchers to throw at least nine innings to qualify for a no-hitter, Hawkins’ and Perez’s games were stricken from the records.
Here are close-ups of the rest of the individual drawings: 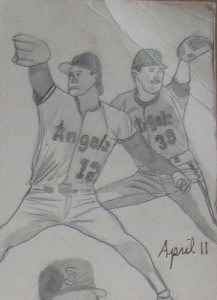 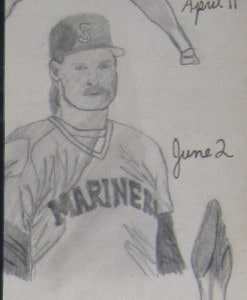 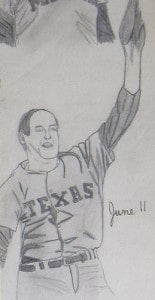 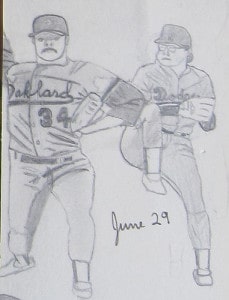 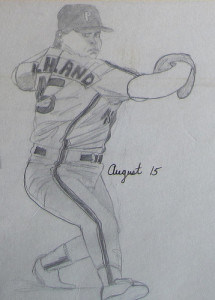 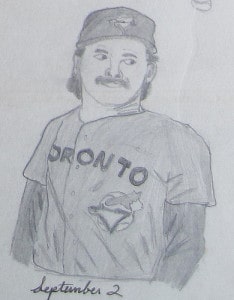 Dave Stieb, September 2. Blue Jays 3, Indians 0.
I particularly remember Stieb’s happening because it’s my birthday and we were at that day’s Mets-Giants game at Shea Stadium — where the teams combined for 20 hits. Either they announced it at Shea or we heard about it on the radio on the way home. I used to say I was at the ballpark the day Stieb threw his no-hitter. Not the same ballpark, but a Major League ballpark.
« Bobby Bo’s ’92 pledge
Linkage: Mets at the Polo Grounds »