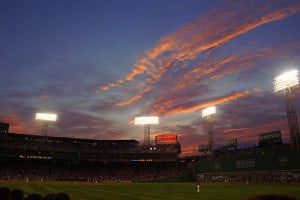 W.P. Kinsella set “Field of Dreams” in Iowa, yet one of the pivotal scenes takes place in Boston, when Ray Kinsella takes Terrence Mann to a baseball game at Fenway Park. Why Fenway? Why have the protagonist drive nearly 1,200 miles to track down a recluse writer, when Wrigley Field — a ballpark just as old, with just as much history — sits just a few hours east of that Iowa cornfield? Because in the book, Terrence Mann is actually J.D. Salinger, who lives in New Hampshire.

Yet it’s those scenes at Fenway, particularly when Ray and Terrence are walking in the cramped, crowded concourse — this in the late 80s, during the Red Sox’s Roger Clemens era of competitive baseball, but before this decade’s two championships and Fenway upgrades — and buying hot dogs and beer (Ray: “So what do you want?” Terrence: “I want them to stop looking to me for answers, begging me to speak again, write again, be a leader. I want them to start thinking for themselves. I want my privacy.” Ray: “No, I mean, what do you WANT?” Terrence: “Oh. Dog and a beer.”), that make me think of the movie.

The ballpark is cramped, cozy and quirky. Our seats were in right field, near the Pesky Pole, and if we sat back and let the shape and angle of the seats tell us where to look, we sat staring at the Green Monster in left field. But all that added to the charm. We had a good view of Johan Santana warming up in the outfield before he went to the bullpen during his pregame routine. I thought about making my way over there for some amazing photos, but decided it just wasn’t worth navigating the narrow, crowded aisles. Instead, I watched the other people watch Johan warm up.

This was my fourth game at the Fens, but my fifth visit. The first experience came on a stopover trip during our annual summer trip to Maine. We stayed with my mom’s cousin and family and visited the ballpark one warm morning even though the Red Sox were out of town. It was 1987 or 1988 and I wore a Mets cap as we walked Yawkey Way and Landsdowne St. When we passed an open gate and gazed upon the green sun-splashed seats and walls of the ballpark, a grounds crew member or some other employee noticed our touristy interest and invited us in to see the field. We walked out of a tunnel on the first-base side and stood behind the dugout, halfway up the grandstand. I can still see in my mind the photo the employee took of our family that day, but there’s little chance I’ll ever find it. It may have been taken with my first camera, a cheap Kodak disk thing that was pretty much manufactured to be the first camera of young children.

That trip also ignited in me my love of baseball jerseys. We walked into a souvenir shop on Landsdowne where uniforms of many MLB teams — but mostly the one in Boston — hung from the ceiling. I wanted them all, to be able to put one on and button it up. I think I tried to find that store again on a subsequent visit, but it either changed its layout and/or display, or it wasn’t the same as I recalled, because it just didn’t have the same effect on me.

The first game was with my dad a few years later; we had tickets in the second row behind the visitors’ bullpen in right field. We stayed with that same cousin in the suburb of Arlington, where they dropped us off at the T station and were there to pick us up when we got back.

The second game came at the end of August 1993, when my best friend Matt and I went up with our fathers on a college visit to Boston College. We paid to park in a Howard Johnson’s lot or some similar nearby business and walked through the back of the parking lot to get to the ballpark. We stopped for an early dinner at the Cask’n Flagon — a visit that may have instilled in me my love of a cozy sports bar. I had my brand new SLR camera with me and loved the zoom lens that brought the players so much closer during batting practice. I focused on Nolan Ryan, Juan Gonzalez and Rafael Palmeiro because we were there during the Rangers’ batting practice. That’s what stands out, because I can’t remember where we sat.

The third game was nine months later, just a night after we graduated from high school. I’m not sure how the trip came up, but three of us — my friends Walker and Brian joined me — bought three individual seats behind the plate. Because the Yankees were in town, we couldn’t get three together, but we still found three close enough that when we sat down, we managed to switch with other fans to have the three of us sitting near one another — two beside one another, the other in front. The fact that three fresh high school graduates could afford tickets behind the plate at Fenway for a game against the Yankees, identify ourselves as being from New Jersey and have a pleasant conversation with the fans around us tells you how the game has changed in the last 15 years.

I don’t know how it came to be the trio of Brian, Walker and me. Walker never was (and still isn’t) much of a baseball fan, and Brian was always a football guy to me, though he does root for the Yankees. My dad drove us up, we checked into a hotel in Kenmore Square within walking distance of the ballpark over the Mass Pike, and dad headed down to Cape Cod to visit a family friend. He returned the next day to pick us up and take us back to New Jersey.

And so my fourth trip was with my wife, my dad not playing a part in my presence at Fenway for the first time. (The next day, we’d drive down to the Cape to meet up with the family, but that’s not quite the same connection.) The Mets won this one for us, 5-3, and we walked back to Tremont St. on a cooling Boston night. It had been a warm, humid afternoon, but after perusing the cool concourse beneath the bleachers and downing a couple of beers, we adjusted.

There aren’t too many ways to better spend a night to kick off the summer than in Boston, at Fenway.

Created with Admarket’s flickrSLiDR.
« What Manny means
The last days of Tiger Stadium »