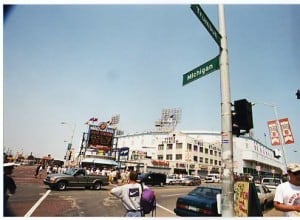 The Corner: Michigan and Trumbull, Detroit.

This is the ninth in a series. Previous posts are:

The San Francisco Giants finished their stay in Candlestick Park Thursday, and the Houston Astros conclude their tenure beneath the painted ceiling of the Astrodome today.

In July, the Seattle Mariners moved across the street from the Kingdome to Safeco Field, and, were it not for the accident that killed three ironworkers in the summer, the Milwaukee Brewers would probably be playing their last game in County Stadium this afternoon. As it is, the Brew Crew plans to move to Miller Park, just beyond County Stadium’s right–field wall, in 2001.

Major league teams are building stadiums as frequently as the National Hockey League awards expansion franchises. But this season’s greatest loss was Tiger Stadium. The old park at Michigan and Trumbull avenues – the Corner – was retired Monday with an 8–2 Detroit victory over the Kansas City Royals. Opened in 1912, Tiger Stadium sat up there with the remaining grand ballfields, which now number just three – Boston’s Fenway Park, Chicago’s Wrigley Field and Yankee Stadium.

Walking into Tiger Stadium is like stepping into 1912. Just like walking around the grounds of Monticello puts you in 1783 or a trip to Gettysburg somehow feels like 1863. Tiger Stadium is a time machine of sorts, and in your mind’s eye, the scene before you is not of peeling blue paint from one renovation or another, but a living black–and–white photograph.

I managed to make a trip to Detroit in July, not wanting to make the same mistake after having been unable to get to Chicago before the original Comiskey Park closed. I dread a farewell visit to Fenway. I was there in Detroit the day the wind blew some of the panels off the press box, perhaps a reminder of why this 87–year–old building had to go.

Columns supporting the upper deck obstruct views. Fans in the back rows of the lower deck lose sight of the ball on towering home runs or cloud–scraping pop–ups. The concourses are narrow and crowded on high–attendance days. To get to sections in the upper deck, fans walk up a ramp to the concourse — “hallway” is more like it — then cross a catwalk to get outside again and find their seats.

But every view of the field, obstructed or not, is a great view. The fans are on top of the action, close enough to hear players communicate or the ball hit the bat. Both the upper and lower decks encircle the field, allowing those who come in from outside to forget where they are for an afternoon or evening.

Tiger Stadium exudes a strong feeling of history. Part of the reason is its location in Detroit’s Corktown section, across Interstate 75 from the downtown skyscrapers. Fenway has Kenmore Square and the Massachusetts Turnpike nearly within reach of a Mark McGwire home run. Wrigley has the houses on Waveland Avenue right outside, and the Sears Tower visible from the bleachers. And anyone who drives to Yankee Stadium is not going to confuse today’s traffic with that of the Roaring ’20s.

Inside Fenway, the view from behind home plate might fool you, but one look up at the glass–enclosed boxes reminds you of recent changes. And as historic as Yankee Stadium is, the 1970s renovations get in the way of some time–traveling of the mind.

Tiger Stadium has few of these modern reminders, with the exception of Tiger Plaza, visible only from the street in the right–field corner where home plate was before the current structure was erected. That’s where the team shop is, selling jerseys and backup catcher Bill Haselman’s cracked batting–practice bat for $60. That’s where you’ll find Little Caesar’s in the food court.

And that’s where it becomes apparent that the Corner is no longer suitable for baseball. Fans of the future will not tolerate restrooms built in the 1950s, or seats behind a post. Hot dogs and peanuts are not always enough to satisfy a ballpark appetite. Baseball alone cannot draw the crowds the modern sport demands. Attending a ball game is an event, and the cost reflects it.

As sad as it is to see a venue with so much history fall to the wrecking ball, it is obviously necessary. With Tiger Stadium’s first game on April 20, 1912, back when it was known as Navin Field, there were no lights, no television monitors, no Little Caesar’s in right field. There was no electronic scoreboard or electronic public address system. The Tigers have to move.

They’re not going far – not to Pontiac, as the Lions did in 1975, nor across town. The 21st century Tigers will play within a mile of the Corner, a 50–second (barring traffic), two–exit jaunt on the freeway to Comerica Park, with the Detroit skyline beyond the outfield fence. Comerica Bank, an older Detroit fixture than the Tigers, bought naming rights for the new stadium, and already the less–than–flattering nicknames have arisen: Commercial Park, and the CoPa.

But it won’t be the same spot where the Tigers first played as a minor–league team in 1896, where Ty Cobb dragged bunts and slid into bases with his sharpened spikes glistening in the sun. It will not be where Lou Gehrig sat out what would have been his 2,131st consecutive game in 1939 or Mickey Cochrane scored the series–winning run in the ninth inning of Game 6 in 1935 World Series.

If Ken Griffey Jr. hits home run No.700, he won’t have a chance to hit it in the same park where Babe Ruth launched his in 1934.

It won’t be the Corner, and Michigan and Trumbull won’t be quite the same.