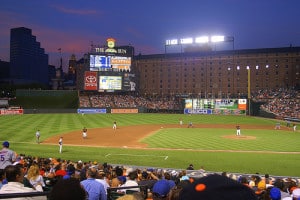 I’m finally catching up after a whirlwind weekend. After working long into the morning on Thursday, I went to that afternoon’s Mets-Padres game before going back to work that night. And who would’ve thought that of the two matchups — Mat Latos vs. Johan Santana and Jon Garland vs. Jon Niese — that it would be the Niese game that would turn out to be nearly perfect?

When Wednesday’s game was rained out and the doubleheader announced for Thursday, I was psyched that Johan drew the afternoon start. I would’ve enjoyed seeing Niese — I’ve seen him before, as far down as the Class A Sally League — but I’m never disappointed when I get to go to a Johan game. As it turned out, I did get to enjoy Niese’s performance on SNY, watching much more closely than if I’d been at the ballpark.

Created with Admarket’s flickrSLiDR.
On Friday, my wife and I hit the road at 1 p.m. — an hour later than we’d hoped, but I needed to sleep in a little — and got to our Inner Harbor hotel a little before 5. Even though we were an hour behind schedule, we still trudged up through the Mount Vernon neighborhood for cold beer and good food at The Brewer’s Art (make time for it the next time you’re in Baltimore), even though it meant missing the start of the game when the light rail took forever to come afterward. We waited for about 20 minutes and watched three northbound trains pass by.

Once there, we entered at Eutaw Street and walked around to our seats on the third-base side, behind the Mets’ dugout. It had been nearly eight years since I’d been to Camden Yards and I think almost 18 since I’d been anywhere but the Eutaw Street concourse, so I didn’t recall the layout of the main concourses. While Oriole Park began the retro ballpark trend, one significant change in most of those that followed is the open concourse that allows fans to see the game as they’re circumnavigating the stadium. It doesn’t detract much from the experience for me, and I actually found it quaint and another retro aspect of the design. The concourses are still wide, but they open through vast wrought-iron gates to the surrounding streets and as you walk to your section, you notice the immense support poles holding up the slanted structure above you. Writing now, I wish I’d paused to take a few pictures (though it’s not like there aren’t any out there, or like I’ll never go back there), but at the time, we were weary and late and eager to get to our seats. Then once there, we didn’t move until the Mets had wrapped up their 5-1 victory.

Created with Admarket’s flickrSLiDR.
« Photo Flashback: Take me back to the aughts
Washington chooses its history »