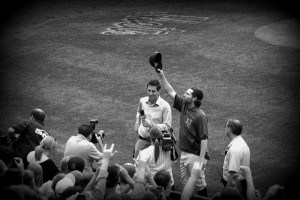 I got a call last week from “my Mets ticket representative,” who of course wanted to know what it would take to get me into a 2013 ticket package that day. But he started out by asking how often I come to games (usually about a dozen, though last year was the first in about eight that I didn’t hit double-digits) and what my favorite memory at a game has been. Nothing tops the 2000 NLCS clincher over the Cardinals, but he meant at the new ballpark. And I didn’t have an answer right away. At first, I answered that I wasn’t sure it had happened yet. 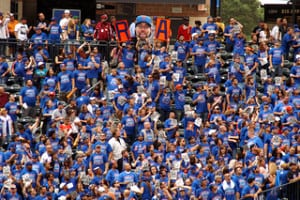 And then I remembered: R.A. Dickey‘s 20th win in September. That is my favorite moment, and if it’s not the new place’s greatest moment, it might be equal to Johan Santana‘s no-hitter. I wasn’t there for the no-no, so I can’t say from experience whether Sept. 27 was better — or even equal to — June 1, but here’s why Dickey’s 20th stands out for me: On a weekday afternoon with school in session, a less-than-capacity crowd was as loud and enthusiastic as an Opening Day sellout or a Friday night opener against the Bronx boys (who of course have plenty of their own fans invading). The City rocked like Shea used to as we cheered on every strikeout as the game moved past the fifth inning, and when Dickey walked off the mound for the last time, everyone — the group from The 7 Line in center field, the folks in the upper deck, those of us along the first-base line — all stood and cheered the way you do for an ace.

Dickey was a great story — and we’ve all heard it, several times, since his book came out last winter — and it was wonderful to have that story on our team. Quite often, we’ll hear from other fan bases that a player is getting so much publicity just because he plays in New York, but in this case, Dickey deserved it all. He was a great story no matter what team’s jersey he was wearing. It was a pleasure to root not just for the knuckleball pitcher, but the person in that uniform.

So while I understand today’s trade, while I know the Mets weren’t going to contend this year, while I realize that Dickey’s value would never be higher and there’s a good chance they won’t be good enough soon enough for him to have an impact on a contender, and while I love that they got a potential All-Star catcher in Travis d’Arnaud, I still find Dickey’s departure a little hard to take as a fan. Just on the face of it, it’s worse than saying goodbye to Jose Reyes. But at least Reyes left on his own, taking an offer that I’m glad my team didn’t present to him. Dickey, though, was dealt away by the team, then signed a very reasonable offer that said team easily (even in their dire financial straits) could have made.

For now, I’m disappointed. I’d hoped to use the occasion of a Dickey contract extension to buy a new blue Mets alternate jersey with his name on the back. Now, I’m thinking 2013 might be the year my Opening Day streak (dating back to 2000) comes to an end. I’m not going to boycott the team and not go to any games, but I’m just not inspired to pay the money to be there for Game 1.

I know this move is better for the future, and the future is where this team’s chances lie (because they’re not in the present — as in the 2013 season). But it doesn’t make the waiting — which Mets fans have been doing since 2006 — any easier. 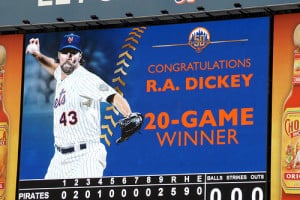