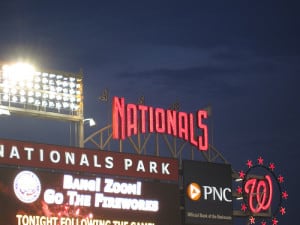 Pennants atop the scoreboard

Two weeks ago, I drove down to Washington to meet up with two college friends and see the Nationals play the Reds. We’d speculated a couple of weeks before and bought tickets hoping it would be Stephen Strasburg‘s debut. But unlike many Nats fans, we didn’t bitch when the team announced his first start for June 8. We held our annual reunion at a ballpark and got drunk anyway. (And then Brad, the one of us who lives near D.C., went again on June 8 and fell in love.)

One thing that caught my eye on my second visit to Nationals Park was the celebration of baseball history, beginning with the statues of Walter Johnson, Frank Howard and Josh Gibson and continuing throught the concourse with banners depicting Hall of Famers from throughout the Major Leagues. And then, atop the arched “NATIONALS” sign atop the scoreboard, fly four flags, three of which display the years 1924, 1925 and 1933 signifying the original Senators’ three American League pennants.

Nowhere did I see any mention of the Expos’ 1981 split NL East title or any recognition of Tim Raines, Andre Dawson or Gary Carter (though I imagine Carter may have a Hall of Fame banner somewhere). Granted, even with just one World Series title among two franchises that left town, Washington has a richer baseball history than Montreal, if only marginally. And I do understand the point of promoting the city’s baseball bloodlines, both in the American League and the Negro leagues. And as far as the statues and banners go, it’s a nod to individual stars, not other teams. The pennants are a different matter.

But now [… segue …] the Nationals are building a history of their own to honor, specifically every fifth day, when Strasburg takes the mound. In that celebrated first start of his, he set a Nationals record with 14 strikeouts — dating back only to 2005, of course. The franchise record is 18, set by Bill Gullickson in 1980. As noted in this week’s Sports Illustrated cover story, the scoreboard couldn’t even keep up — the strikeout display only counts to 12.

Baseball is going nuts for Strasmas every five days, so I can only imagine the giddiness felt inside the Nationals’ front office. The team that didn’t want to announce his first start until two weeks before has now let it be known that he’ll pitch every fifth day until the All-Star break — in essense, they’re rearranging their rotation around the new kid. In doing so, the Nationals ensure (barring a rainout) that Strasburg will pitch twice on this current homestand, tonight and again on Wednesday, the final day of a six-game stretch back in D.C. Had he pitched every fifth game, he would have gone tomorrow and then again on Friday in Baltimore.

Oh, and about that — by putting Strasburg on an every-fifth-day schedule, the Nationals ensure (barring, again, a rainout) that he will not pitch in Baltimore next weekend. That would’ve surely drawn a big crowd, perhaps a sellout, to Oriole Park, no doubt bringing a lot of Nationals fans up from the south — and from the fanbase battleground between the two cities. Whether they meant it this way or not, that’s a pretty big f-you to Orioles owner Peter Angelos, who did all he could to prevent Washington from getting a team and then made sure he got a sweetheart deal regarding television rights, relegating most Nationals games to MASN2.

After Wednesday’s start, Strasburg will pitch in Atlanta — those showdowns with Jason Heyward may stand out when writers cast their Rookie of the Year votes in September — and then face the Mets at home during the Fourth of July weekend, probably Saturday the third. He would then make his final start of the first half on July 8 at home against the Padres.

Then it remains to be seen what they do with his schedule. They want to keep him at 160 total innings, and with 55 1/3 in the Minors and 12 1/3 so far in the Majors, he’s already at 67 2/3. If he averages six innings in these next five starts before the break, that puts him at 97 2/3 — leaving roughly just 10 more starts this season. Washington will no doubt be tempted to alter that plan if they get to his 10th start and find themselves fewer than five games out of a playoff spot, but it might play a part in setting up the second-half rotation. Do they give him nearly two weeks off and start him in the fifth game out of the break, on Tuesday, July 20? Do they go with a six-man rotation when (if) they get Jason Marquis back or Chien-Ming Wang is ready?

I do find myself drawn to Strasburg’s starts. I was at the Trenton Thunder game on Sunday, but I DVR’d the Nationals-Indians game on TBS and watched Strasburg’s 5 1/3 innings a day later. Tonight, the Mets and Yankees meet in the Bronx with the Amazin’s on a seven-game winning streak (yes, against the lowly Orioles and Indians, but all on the road, which is definitely something for this team), but I may put that game on mute on the TV and watch Strasburg on MLB.TV — with the White Sox TV feed so that I can hear Hawk Harrelson do his best to refrain from any praise of “the bad guy.” I toyed with driving down to D.C. again today, but some car trouble and the current use of a rental and various other hassles had me decide against it. I hope to see him once this year, but it remains to be seen if the schedules — the Nationals’ and mine — will allow it.

I’d like to experience just one of Strasburg’s starts this year first-hand, whether in D.C. or elsewhere, because I was a bit too young to have seen Dwight Gooden in the mid-80s. First mentioned by Mets Police and echoed this week by Marty Noble, Gooden on a Friday night at Shea was an event (and “Gooden on a Friday night” should be the name of an essay or a play or something). I remember the buzz when Pedro Martinez would pitch a few years ago, and I have no doubt that the anticipation for Gooden’s starts was much more elevated.

So far, Strasburg has nearly doubled the average daily attendance when he’s pitched. His debut drew 40,315, nearly twice the 22,102 the Nationals are averaging — and that’s as of today, including that start of his. He also debuted on a Tuesday, which draws less on average to begin with, so he did bring in twice as many people as the Nats would otherwise get on a Tuesday night. On Sunday in Cleveland, 32,876 came out, just under twice the 16,604 the Indians had drawn. I just went onto the Nationals’ site and put in for two tickets for tonight and found it only gave one option: $350 Lexus Presidents seats. Looks like another sellout.

I went back to look at Gooden’s starts and compile the numbers from his first three seasons, 1984-86, which included his Rookie of the Year campaign (’84), his NL Cy Young season (’85) and the Mets’ World Series season (’86), when they ran away with the NL East. Though Noble specifically cited Gooden’s starts from mid-’84 through the first few months of ’86, I averaged out his Friday night home starts for all three seasons: 38,385 over nine Friday night home games. Pretty damn good, and that doesn’t include some high-drawing Saturday or Sunday games, or the 47,823 who came out on a Wednesday in September 1986 to watch him throw nine innings to clinch the division. Only twice in those nine Friday night games did the Mets draw fewer fans than their average for the season. One was June 1, 1984 — 20,968 vs. the ’84 average of 22,749 — still early in the legend of Doctor K; the other was, surprisingly to me, July 4, 1986, when 28,557 came out in a year they averaged 34,168. I figured the holiday would bring more to the ballpark, but because it was a weekend, perhaps the throngs were barbecuing or at the beach. Or perhaps it was a day game.

Maybe at the end of the season, I’ll go back and take a closer look at Doc’s starts vs. Strasburg’s, when we have more numbers to include. But if these first three dates are any indication, Saint Stephen is going to be a draw throughout the National League for the rest of the season.

« Photo Flashback: Meeting the Mets home and away
Just a bit of a break from the norm »